Senator Elizabeth Warren(D-MA) was a rising star in the race to be the Democratic nominee… then she started talking.

The more Warren spoke, the more of a liar she was revealed to be.

She has lied about:

And that’s just her personal history.

Her refrain on the campaign trail was that she “had a plan for that” right up until it came to talking specifics.

It turns out that (shocker!) Liz Warren undervalued the cost of Medicare For All and said that her plan would only include a tax on “The Rich.” Not only that, she failed to calculate the losses that would occur once Medicare For All was adopted.  Still, her plan included $20.5 trillion in new spending.

As support for Warren began to fade and there was a surge in support for the Democratic nominee that had the primary rigged against him in 2016, she decided to toss Bernie under the bus and attempt to steal his support.

Many people (rightly) believe that Bernie was robbed in 2016 because he dared run a campaign against the rightful heir of Obama’s Progressive legacy, “Crooked” Hillary.

She claimed that Bernie told her that a woman can’t win in 2020.

Her plan didn’t work out so well. Voters don’t like that kind of cattiness and Warren is a known liar.

But she’s doubling down on the claim now that her poll numbers in Iowa are taking a serious nose-dive.

According to a WaPo/ABC News poll, she’s lost more than half of her support among women ahead of the Iowa caucus, a critical voting block for Warren. Overall, her support is down almost half nationally. The support seems to have gone straight to Bernie.

Ahead of Iowa’s precinct caucuses, a Washington Post-ABC News national poll found that 12 percent of Democratic-leaning registered voters would back Warren in their state’s primary or caucus, down from 23 percent in October.

The Massachusetts Democrat has lost support among women aged 18 to 49, sliding sharply from 27 percent to 12 percent, The Washington Post reported.

The poll also revealed an increase in support for Sanders in the past few months, with 23 percent of Democratic-leaning registered voters backing the Vermont independent compared to 17 percent in the October survey.

So, she’s playing the “Woman Card.”

She posted a 4-minute video on social media basically saying that women win elections, so vote for a woman.

The reactions were pretty spectacular. 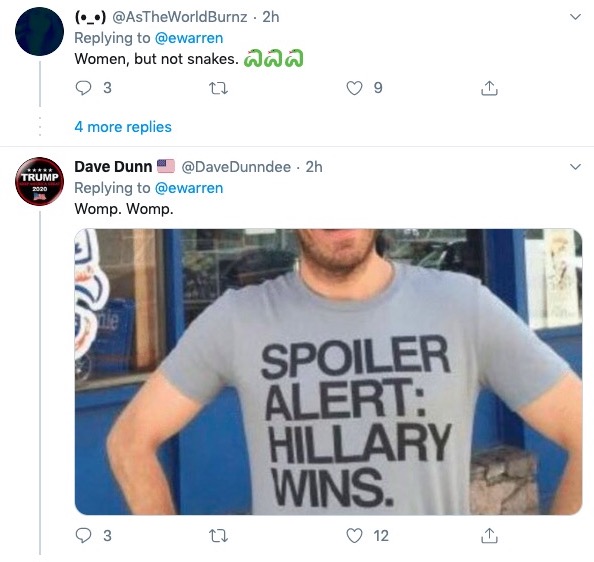 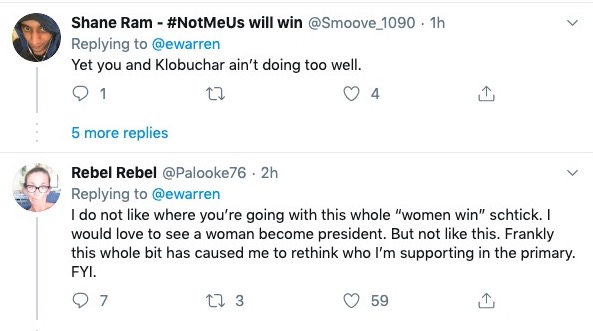 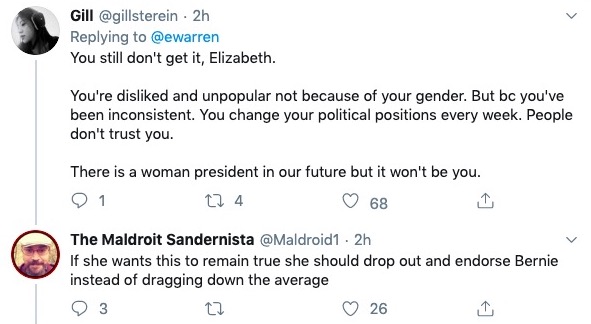 Jimmy James seems to have it precisely correct — statistics don’t care about your feelings, Liz.

Exclusive: Artur Pawlowski On Victory Over Canadian Nazis: We Are Lions, We Eat Hyenas For Breakfast (Video)
December 4th, 2021 Sons of Liberty Media