You don’t normally see this guy dropping f-bombs. But he was fired up today.

It all came down to the potential implications of the DOJ being weaponized against private citizens for political purposes.

Scott knows a thing or two about using the powers of persuasion to achieve his goals. Among other things, he is a trained hypnotist.

He understands that, in the right circumstances, one guy who knows how to work a crowd can bend others to his will… especially if there is some reason to accept that person as authoritative. He should know, he experienced it himself during his own jury duty.

For example, the foreman of a jury with a background in law has a natural ability to influence a jury by reason of his knowledge of law that combines his position of authority in the group with his perceived professional authority. Throw a political ax to grind against the defendant into the mix and you have a real potential for a miscarriage of justice.

While Pelosi and company are convinced that Trump and Barr are corrupt and need to be thrown out, Scott Adams was looking elsewhere for malfeasance.

And that was the spark that set off Scott Adams in his rant.

Coming in hot. There will be cursing. And coffee. #PardonRogerStone https://t.co/XZKP21kjbF

For those who aren’t going to play the whole video, here’s his tweet version.

I'd like to go on record in favor of any U.S. president speaking out against travesties of justice whenever and wherever they occur. Fuck your tradition. Fuck your decorum. Fuck your feelings. #PardonRogerStone

Cernovich dug up something interesting:

Rumors regarding the make-up of the jury that voted to convict Roger Stone floated around, but no reporter would publicly identify any jurors. One juror has revealed herself in a CNN column.

And THIS isn’t at all suspicious, is it?

No big deal just a picture of a juror on the Roger Stone case hanging out with the former DNC Chair.

Oh and she's scrubbing her social media in real-time after my reporting.

Be sure to check out these Tweets. pic.twitter.com/ddGQWcU0Uy

And Techno Fog — a top-notch source in all things Deep State and Russiagate related, made some interesting observations of the kind that open up perjury questions.

On that Roger Stone juror –

Of the utmost importance will be her responses to these juror questions on:

(1) Social media and the Mueller investigation

If she answered in the negative… things will get interesting.

Might this seem a little bit ’emotionally invested’ in the verdict?

Here is the Tweet from one of the jurors who voted to convict Roger Stone, from the same day. pic.twitter.com/p54zkoMDCB

It keeps getting ‘curiouser and curiouser’. 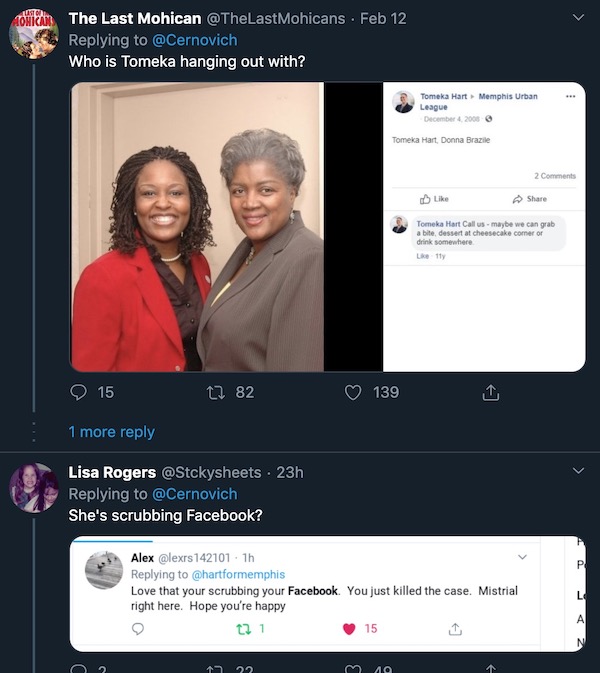 Of course, the fact that the prosecutors that stepped down are part of the Mueller team should itself raise questions about misuse of political power, especially with some of the Mueller team’s past histories of ethically dubious legal methods.