The fourth time’s a charm!

Probably because it’s not her brother this time.

Wait — is it the fourth time or the third? Someone’s gonna need to get Karl Rove over here with his whiteboard.

Or maybe just a corkboard with the pins and the yarn…

It’s all rather complicated.

Congresswoman Ilhan Omar(D-MN) has just announced on Instagram that she got married. Although she doesn’t identify the groom, the photo appears to be of her and her head fundraiser, Tim Mynett. The caption is also telling, “From partners in politics to life partners so blessed.”

The “Squad” member has been romantically linked to Mynett for several months, but both Mynett and Rep. Omar had denied the affair after Mynett’s estranged wife came forward saying that her husband was seeking a divorce because he was in love with Omar.

Rep. Omar and her husband filed for divorce in October just two months after Mynett’s wife made the affair public.

Congresswoman Omar had refused to confirm the affair, instead, she insisted that her private life was private.

It appears that now that both divorces have been finalized, it’s time to go public.

“From partners in politics to life partners, so blessed,” Omar captioned a black and white shot of her and her new husband canoodling with rings on their fingers.

While Omar, 38, didn’t identify her hubby, the photo appeared to be of Tim Mynett, 55, her chief fundraiser who she’s been romantically linked to.

This is one personal social media post she’s not going to delete… at least for now. 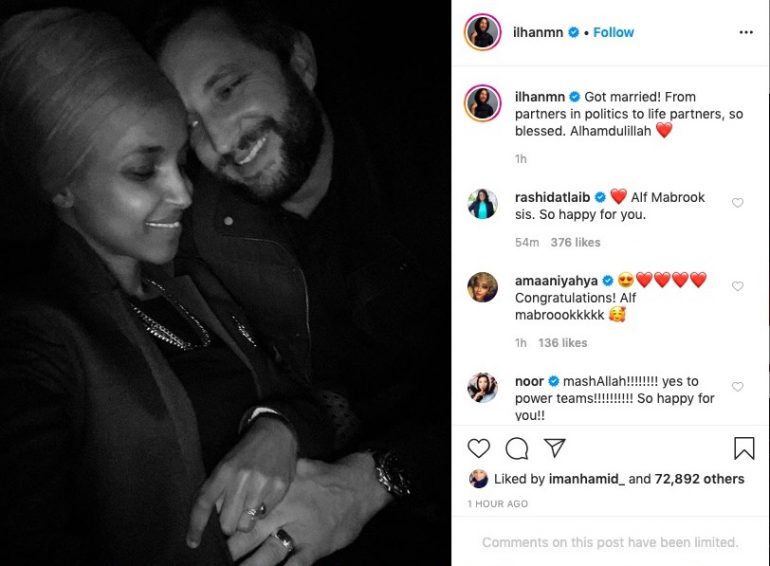 Conservatives on Twitter are having a field day with the news.

Ilhan Omar just announced she married her communications consultant. But his wife was lying about them having an affair. Of course. pic.twitter.com/EKntYtDoPU

Ilhan Omar announced she got married tonight. Thoughts and prayers for her brother. pic.twitter.com/i8BfO9MxFy

Ilhan Omar announces she just got married to her political strategist, who she denied dating after she was caught cheating on her husband with him and paying his firm $300,000 from campaign contributions. pic.twitter.com/Geyw1CgEFe

Ilhan Omar has married her political strategist, whom her campaign has paid hundreds of thousands of dollars. She denied dating him at first. But now that they're hitched she is being enriched by the money people donated to her campaign. Nice work if you can get it.

The issue isn’t who Ilhan Omar married, but that she is suspected of committing federal immigration fraud through a scam marriage

Hey, she’s getting better at this, at least it’s not her brother this time. https://t.co/xujEtkp4Gv

Well, let’s see how long this lasts… Rep. Omar doesn’t exactly have a stellar record when it comes to marriage.