NPR is a government-funded entity. That OUGHT to mean they are impartially sharing facts and events as they happen. Instead, they take sides and push narratives.

A recent story was one of their more egregious examples of bias.

Here is a screenshot of the story they ran (with a disclaimer). 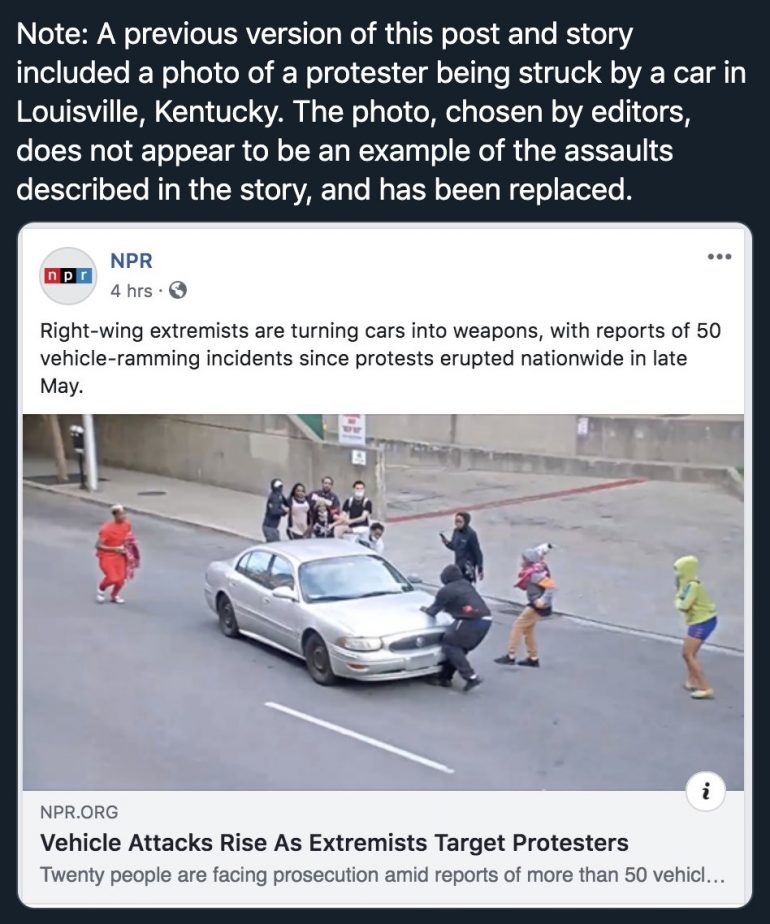 Here is their corrected version of that same story. 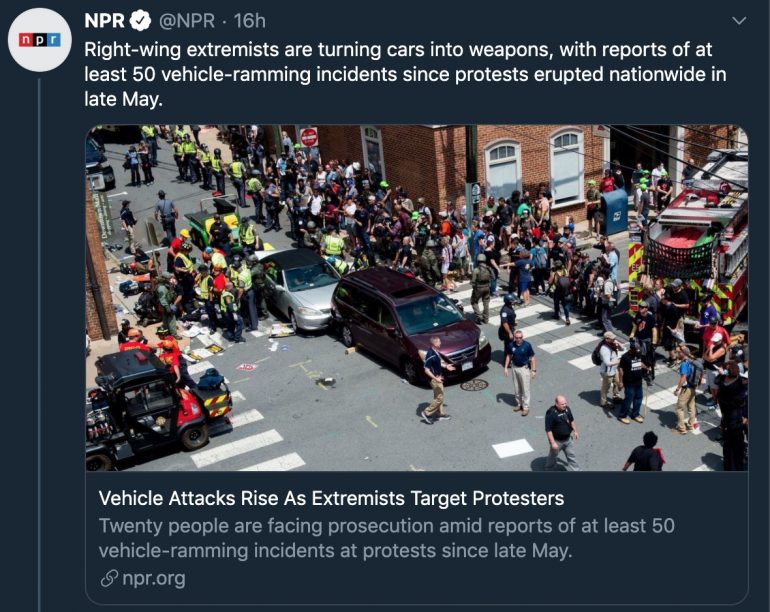 Where do we even begin?

First off, on what basis is NPR framing everyone who gets into conflict with agitated mobs with an established inclination toward violence as ‘Right Wing Extremist’? How do they characterize the ‘protesters’ that climbed up on an 18-wheeler, pulled the driver out of his cab, and beat the living hell out of him? Was the trucker an ‘extremist’? Where his attackers ‘protesters’?

By the NPR’s own ‘logic’, that must be what they are. How else could they run the story they went with?

Right-wing extremists are turning cars into weapons, with reports of at least 50 vehicle-ramming incidents since protests against police violence erupted nationwide in late May.

At least 18 are categorized as deliberate attacks; another two dozen are unclear as to motivation or are still under investigation, according to a count released Friday by Ari Weil, a terrorism researcher at the University of Chicago’s Chicago Project on Security and Threats. Weil has tracked vehicle-ramming attacks, or VRAs, since protests began.

…”The message they’re trying to send is, ‘You need to get out of the street and stop these protests,’ ” Weil said. “They’re trying to intimidate the most recent wave of BLM protesters, to stop their movement.”

The last rash of vehicle rammings occurred in 2015 and 2016, Weil said, when the “Run Them Over” meme was popularized in far-right circles in response to Black Lives Matter protests and demonstrations against the controversial Dakota Access Pipeline. —NPR

That’s ONE possible explanation, but it’s also a rather one-sided interpretation of events.

The story itself is a bait-and-switch. They open with a statistic about vehicle-pedestrian contact situations within the past month before basing the rest of their article about events from 3, 4, and 5 years ago.

The photo they originally used was one that completely disproved their premise. It was video of a hostile crowd surrounding a car, the car trying to back up and go around, but the crowd didn’t let the driver get away. So the car hit the gas to get free of the ring of hostile people. One ‘protester’ went flying. The entire incident was caught on film.

Here's a fuller video of what you're calling a "right-wing extremist attack" … a driver is harassed by a group of people, tries to get away, is then attacked by a larger group… and uses their vehicle to defend themselves and get away.

This story is leftist bullshit. pic.twitter.com/771gEebiqg

But the ‘fix’ for the story is no better. They use a photo of the guy from Charlottesville driving his car into the crowd. The only way that using a guy who was treated for schizophrenia and who idolized Hitler can be considered representative of the roughly 50% of Americans who lean to the political right is to take at face value the most extreme of the Left’s malignant histrionic hyperbole. Such claims are often made, but never challenged by supposed journalists.

Even that event in Charlottesville itself, the media deliberately cuts the ‘very fine people on both sides’ quote out of its context. Less than 60 seconds later, if you read the transcript, Trump himself makes it clear that he specifically excludes any bigots from his ‘very fine people’ comment.

But what do they care about facts? They already had their sound bite.