One thing’s for sure–it’s a helluva conversation piece!

Leftists and the morally preening NeverTrump Republican grifters just cannot understand why so many evangelicals support a former billionaire playboy who is on marriage number three.

Yeah, maybe on the surface it seems odd, but there are some good reasons that Christians dig Trump.

Here’s a handful of them:

And that’s just a selection.

America is a special place founded on Judeo-Christian values and no matter what the critics say, that is what has made our country the greatest and freest country in the world.

Although we have political squabbles that seem vital in the moment–and maybe they are–we know that our battles in this world aren’t really against flesh and blood, but against the rulers of the darkness of this age and spiritual wickedness in heavenly places. (Ephesians 6.10-18)

President Trump, through his policies, has been taking on that wickedness head-on.

Check out this spicy addition to the Doug Giles collection of Trump art… Trump vs. El Diablo 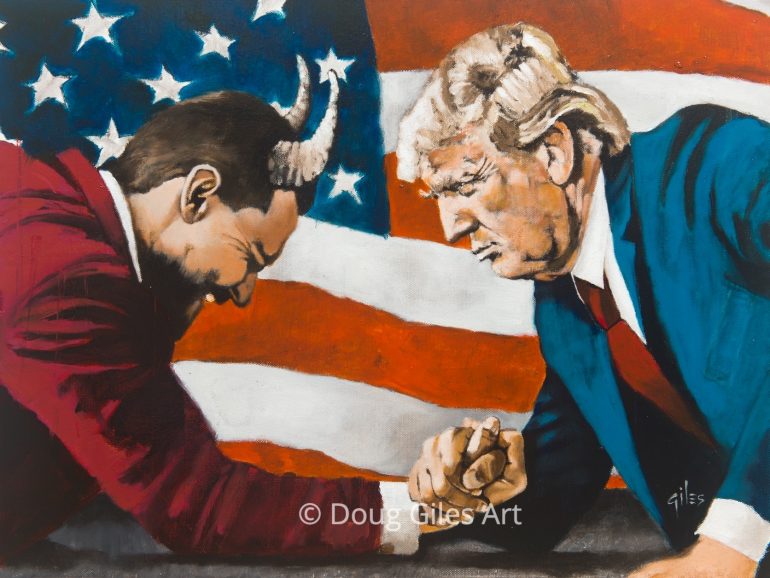 Get your copy here.

Choose the perfect size and medium for your home or office.

Now, this isn’t to say that Trump is on the level with Jesus in defeating El Diablo, but that Trump’s policies are consistent with Christian principles.

But I’m sure your liberal relatives won’t get it. They’re gonna vote for Joe because he’s a ‘staunch Catholic’ who supports an extreme abortion agenda and has committed to go after nuns to provide birth control as part of Obamacare because those are ‘Christian principles.’

Schaftlein Report | Were the election results “baked in” prior to election day?! (with Gabe Rench)
November 30th, 2020 Liberty Hub