You guessed it, Xi’s Red China has found a way to make their citizens suffer even MORE than most people normally do under his iron-fisted rule. More than they have under the miseries associated with the Wuhan Chinavirus. And three guesses who’s taking the brunt of it.

If you guessed Xinjiang and the Uighurs, you would be absolutely right.

When police arrested the middle-aged Uighur woman at the height of China’s coronavirus outbreak, she was crammed into a cell with dozens of other women in a detention centre.

There, she said, she was forced to drink a medicine that made her feel weak and nauseous, guards watching as she gulped. She and the others also had to strip naked once a week and cover their faces as guards hosed them and their cells down with disinfectant “like firemen”, she said.

“It was scalding,” recounted the woman by phone from Xinjiang, declining to be named out of fear of retribution. “My hands were ruined, my skin was peeling.”

The government in China’s far northwest Xinjiang region is resorting to draconian measures to combat the coronavirus, including physically locking residents in homes, imposing quarantines of more than 40 days and arresting those who do not comply.

Furthermore, in what experts call a breach of medical ethics, some residents are being coerced into swallowing traditional Chinese medicine, according to government notices, social media posts and interviews with three people in quarantine in Xinjiang. There is a lack of rigorous clinical data showing traditional Chinese medicine works against the virus, and one of the herbal remedies used in Xinjiang, Qingfei Paidu, includes ingredients banned in Germany, Switzerland, the US and other countries for high levels of toxins and carcinogens.

The latest grueling lockdown, now in its 45th day, comes in response to 826 cases reported in Xinjiang since mid-July, China’s largest caseload since the initial outbreak. But the Xinjiang lockdown is especially striking because of its severity, and because there hasn’t been a single new case of local transmission in over a week. — Independent

Even as Wuhan and the rest of China has mostly returned to ordinary life, Xinjiang’s lockdown is backed by a vast surveillance apparatus that has turned the region into a digital police state. Over the past three years, Xinjiang authorities have swept a million or more Uighurs, Kazakhs and other ethnic minorities into various forms of detention, including extrajudicial internment camps, under a widespread security crackdown. —AP

She was released from detention, and conditions have improved, but she is still under threat, even though she is confirmed to be COVID-negative, and has been regularly tested.

Once a day, she says, community workers force traditional medicine in white unmarked bottles on her, saying she’ll be detained if she doesn’t drink them. The AP saw photos of the bottles, which match those in images from another Xinjiang resident and others circulating on Chinese social media.

Authorities say the measures taken are for the well-being of all residents, though they haven’t commented on why they are harsher than those taken elsewhere. The Chinese government has struggled for decades to control Xinjiang, at times clashing violently with many of the region’s native Uighurs, who resent Beijing’s heavy-handed rule.

“The Xinjiang Autonomous Region upheld the principle of people and life first….and guaranteed the safety and health of local people of all ethnic groups,” Chinese Ministry of Foreign Affairs spokesman Zhao Lijian said at a press briefing Friday.

Xinjiang authorities can carry out the harsh measures, experts say, because of its lavishly funded security apparatus, which by some estimates deploys the most police per capita of anywhere on the planet. —-AP

Seriously, knowing how underhanded China has already been to the Uighurs, would you willingly drink this unidentified brown water? 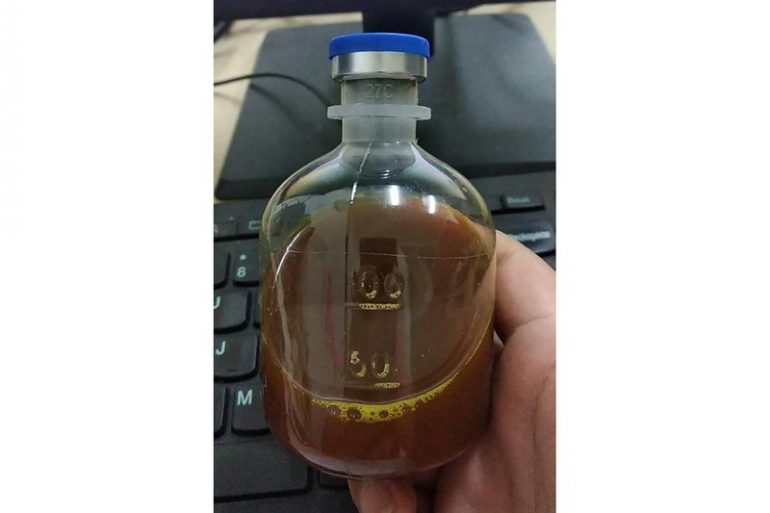 So, while Pelosi and other Democrats thump their chests about Trump being a ‘dictator’ and deride our legitimate police as ‘thugs’ and ‘Gestapo’ these same Democrats collectively turn a blind eye to what’s happening under Xi.

It must be because acknowledging what a real authoritarian is capable of would expose their complaints about Trump as childishly petty and peevish.