Faith doesn’t really matter to the journos…unless it can push their political agenda.

It’s quite clear that the majority of “journalists” have no real concept of basic Catholic doctrine and simply project what they think Catholic doctrine onto the subject of their articles. What is even more interesting is that their view of Catholicism shifts depending on who the subject they are reporting on is.

The mask has been ripped off of the so-called media elites in their coverage of both Joe Biden and Judge Amy Coney Barrett, one of President Trump’s top candidates to replace the late Ruth Bader Ginsburg on the Supreme Court.

S.E. Cupp wrote in the New York Daily News that the anti-Catholic bias has become rampant by journos and leftists everywhere.

“Trump’s likely RBG replacement, Amy Coney Barrett, is a Catholic extremist with 7 children who does not believe employers should be required to provide healthcare coverage for birth control. She wants the rest of American women to be stuck with her extreme lifestyle.”

That’s a now-deleted tweet from a documentary filmmaker named Arlen Parsa, which earned some backlash for what I can only assume is its rank and vicious anti-Catholic bigotry. After all, imagine replacing “Catholic” with “Muslim” or “Orthodox Jewish,” for example, and it isn’t hard to see why this so offended…

…Critics point to her affiliation with the People of Praise as proof of her backwardsness, comparing the sect to Margaret Atwood’s “The Handmaid’s Tale.”

Sandi Bachom, whose Twitter bio reads “Independent Frontline Journalist” and contributor to Getty and NowThis, tweeted, “Amy Coney Barrett belongs to a radical, extreme, Christofascist cult where the women are called handmaids and the men make all the decisions. Margaret Atwood says it was inspiration for the Handmaid’s Tale.”

Newsweek published an article with the same claim…

…but had to issue a correction because it was factually incorrect.

Correction: This article’s headline originally stated that People of Praise inspired ‘The Handmaid’s Tale’. The book’s author, Margaret Atwood, has never specifically mentioned the group as being the inspiration for her work. A New Yorker profile of the author from 2017 mentions a newspaper clipping as part of her research for the book of a different charismatic Catholic group, People of Hope. Newsweek regrets the error.

Here is Reuters stealth-editing their article on the Notorious ACB as noted by conservative reporter, Jerry Dunleavy.

I knew @Reuters would stealth-edit this religiously bigoted hit piece on ACB (written by @danieljtrotta & edited by @rosalbaob), so I archived it.

Note it’s not just the headline change, but the first paragraph has also been edited. 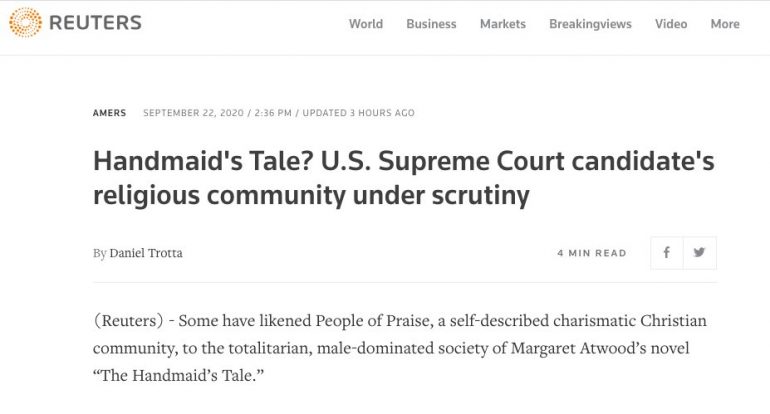 And here’s the edit: 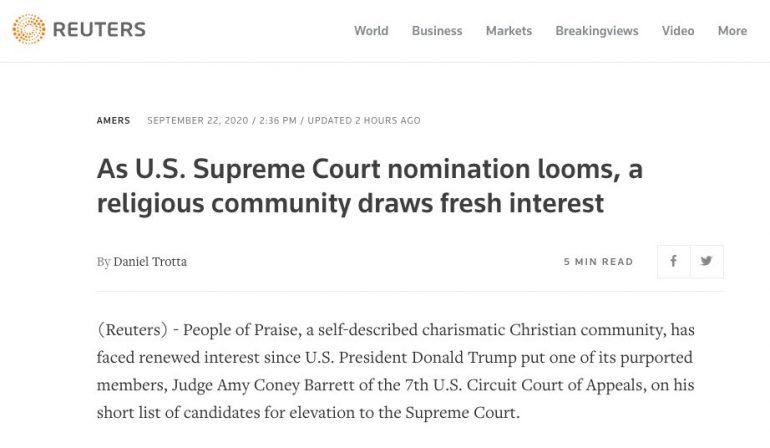 Edited first paragraph: People of Praise, a self-described charismatic Christian community, has faced renewed interest since U.S. President Donald Trump put one of its purported members, Judge Amy Coney Barrett of the 7th U.S. Circuit Court of Appeals, on his short list of candidates for elevation to the Supreme Court.

Contrast that to the coverage of Joe Biden’s Catholicism.

The New York Times published an opinion piece noting that if elected, Joe Biden would be the second Catholic president–the first was JFK.

NPR published an article about how Joe Biden’s faith shapes his politics.

When Joe Biden seeks to inspire or comfort, he turns to his faith. He speeches are woven with references to God, biblical language or the pope…

This wasn’t a one-off religious reference; this is how Biden routinely speaks.

What the hell are they talking about?!

Just because Biden peppers his speeches with Catholic-lite references that is what makes him devout?!

Do they not know about this phenomenon in politics called “speech writers”?

Religion deals explicitly with morality, and if that’s the case, why is one Catholic’s worldview “The Handmaid’s Tale” while the other’s–who has been denied communion for his failure to adhere to basic doctrine–lofty and revered?

[Also, as an aside, Leftists need to read more books. As far as I can tell, they have only ever read the Harry Potter series and The Handmaid’s Tale, which is just pathetic, really.]

Joe Biden does not ascribe to some of the main points of Catholic doctrine. The push for “social justice” doesn’t take precedence of the right to life.

Many Christians are pro-life, but the official position of the Catholic church on life issues often goes much further, extending to refusing to use birth control and extends from “conception to natural death.” This is not pro-abortion Biden’s position at all.

The same could be said of a slew of issues:

Dang. That sounds like the majority of the Democratic Party platform, doesn’t it?

Joe Biden ascribes to much of that and yet, he’s considered a “devout” Catholic whose faith has “shaped” his politics.

Well, she gets this from Democrat Senators during her Confirmation hearing:

Would Senators Dianne Feinstein (D-CA) and Dick Durbin (D-IL) grill their nominee for President this way? There’s no way that they would ever do that.

Because for Democrats, you can have your faith as long as it’s “private” and doesn’t affect your public views–unless you are selective with the doctrine of the faith you claim to adhere to and allow that to “shape” your politics, then it’s just fine.

I swear if Democrats didn’t have double standards, they wouldn’t have standards at all.

Pronoun Nonsense in the Navy and Beyond
The Black Sphere

Aaron Bean Endorsed by Marco Rubio for Congress
The Floridian