They are smashing and burning their way through the cities, with anarchistic messages and hammer-and-sickle imagery. But they’re just ‘protesters for justice’, right?

Judging by the propaganda these drones have sprayed on the war memorials they’ve been tearing down on Thanksgiving, it looks like these clowns didn’t read our Thanksgiving article, blowing holes through the Thanksgiving-is-evil propaganda they like to parrot.

That article available here:PRAGER U: The Origin Of Thanksgiving As A Holiday (VIDEO)

What they lack in understanding, they more than make up for in ego and arrogance.

On Thanksgiving, they went on yet another crime spree in Portland. (And, you guessed it, thye got off scot-free.)

Overnight on 26 Nov., antifa extremists in black bloc smashed up numerous businesses again in Portland to protest Thanksgiving. Police only arrested three adults & one juvenille. One of the militants in the group had a pistol. #PortlandRiots #antifa https://t.co/s1GM2OgTiZ pic.twitter.com/Bbgnqcq2cB

Chester Hester, 24, & Nicole Noriega, 38, were arrested at the #antifa anti-Thanksgiving riot where businesses were smashed in Portland. They were both charged w/10 felony counts of criminal mischief but were released without bail. https://t.co/YcKUPCitWs https://t.co/MBP9Spa9R4 pic.twitter.com/vqgdO2MqRi

Videos and images showed red paint sprayed onto the column located in the Lone Fir Cemetery with the words: ‘F**k USA.’

A statue that was mounted on top of the structure was also toppled and seen on the ground covered in red paint.

The memorial, which was erected in 1903, honors soldiers of the Civil, Spanish-American, Mexican, and Indian wars, according to the cemetery’s website. –DailyMail 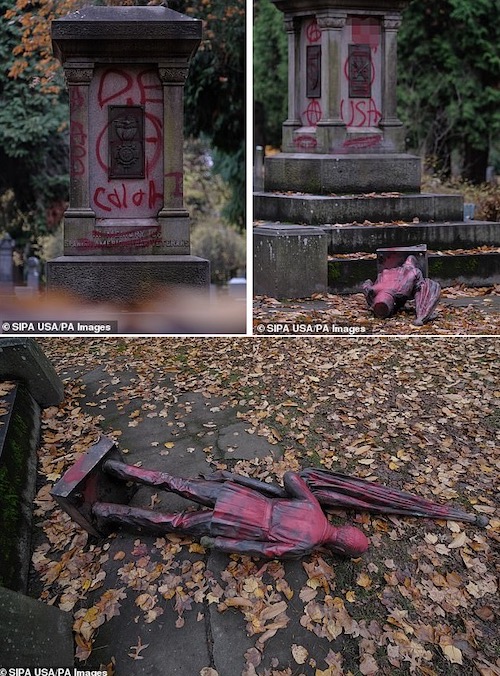 Rioting is just fine. Just so long as they weren’t attending a large Thanksgiving dinner before that, eh?

Yeah, having these people immediately back on the street without consequence couldn’t have ANY negative effect on society.

Meanwhile, in Paris, more of the same.

Maybe Nadler can explain why this ‘imaginary’ group is so well-financed and highly organized?