Every single one of the 73 million people that voted for Trump should have a copy of this in their home.

Donald J. Trump was elected in 2016 because he was a counter-puncher. He didn’t sit back and let the Democrats and the Media (D) steamroll over him the way that other Republicans did.

There ain’t no way that he’s backing down now!

In 2016, 63 million Americans voted for Trump, after 4 years of constant Media (D) harassment, Obama and Biden staging a soft coup, the Russia Collusion Hoax, a sham Impeachment, and all the other B.S. tossed at him, 10 million more Patriots cast their ballots for him in 2020.

Democrats decided to use the pandemic as an excuse to fiddle around with the way that ballots are cast and remove guardrails to prevent illegal voting… but you’re not allowed to ask any questions about that.

Now, the people who called themselves “The Resistance” for 4 years, who fed off of every single salacious and damning rumor spun into a massive scandal by a hysterical Rachel Maddow, and had President Trump go through an impeachment trial in an election year for political reasons, those people are now upset that he won’t concede an election that hasn’t been officially called yet and that he has launched lawsuits to preserve the integrity of the election because of illegal activity against the GOP in multiple states.

There’s a perfect response to that, and it’s called “Defiant Trump.” 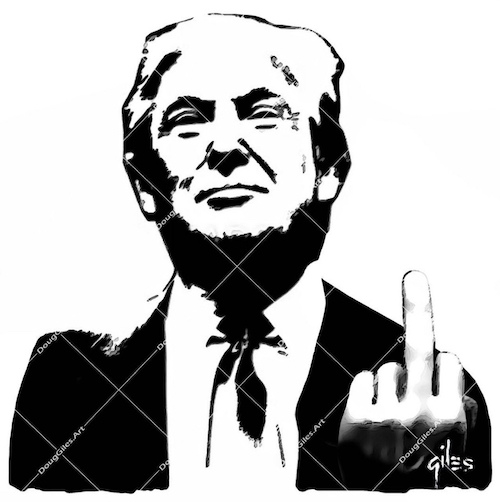 First time customers get 20% off and FREE shipping!

We have prints ranging in size from small to T-Rex wall monsters. This is the perfect gift for the rowdy MAGA patriot.

18X18″ giclee on stretched canvas signed and numbered Limited Editions. Only 100 will be made available.

Rocks are now RACIST? ARRRRGgggggggg!
November 28th, 2020 The Real Side With Joe Messina

Carter Page Is Suing The People Who Spied On Him For $75 Million
November 28th, 2020 The Mental Recession