With half the world coalescing around the notion of wearing the masks as a sign of — if nothing else — moral purity in a world where COVID reigns supreme, you’d think that the Don Lemons of the world have some sort of evidence showing they really ARE the moral giants, towering over a Liliputian world of MAGA peeps.

He wouldn’t make these outlandish claims about science and super-spreaders without good statistical data to support him, would he?

But there’s a problem with that premise. Even if CNN doesn’t take an interest in the data… what if someone else does?

In Florida, for example, most counties have so far bravely refused to implement mask mandates while others, usually in high population centers, have done so. Justin Hart and the team at Rational Ground (follow them on Twitter here – it’s worth it) just released a comprehensive data analysis of masked vs non-masked counties in the state. A total of 22 of 67 counties in the state have implemented a mask order at some point during the period of May 1 through December 15. It may not sound like many, but these include almost all of Florida’s largest metro areas. To be more than fair, if an area added a mask order at some point during the outbreak, the study’s authors gave a 14 day period to allow time for cases to begin subsiding. “Cases were summed for both mandate and non-mandate jurisdictions and adjusted per 100,000 people for days the mandates were or were not in effect,” wrote the authors, describing the methodology used.

If masks did even close to as advertised, one would expect to see the counties that went maskless to be absolute dumpster fires next to the counties that implemented mandates, right? At the very least, the numbers should favor the masked areas by more than a percentage point or two. So, how did it go? Yep, it was the Mask Cult’s worse nightmare:

In other words, counties with mask-mandates in place actually did WORSE than those that refused to implement them. (Yeah, color me shocked.) The authors even accounted for population density in their analysis, suggesting that it didn’t have an impact on the numbers because four of the 12 most populous counties in Florida never had a countywide order. “When the eight DID have an order in effect, there were 64 cases per 1,000. In periods 11 of 12 DID NOT have one, there were 40,” they wrote. —Townhall

Just an outlier, is it?

“But that’s just Florida,” you say. “They’re weirdos anyway. Surely masks have worked in the rest of the country.” Well, I’m glad you asked! The good folks at Rational Ground went on to compare national numbers, pitting the states that resisted the urge to impose a statewide mask mandate against those that masked up. How did those compare? 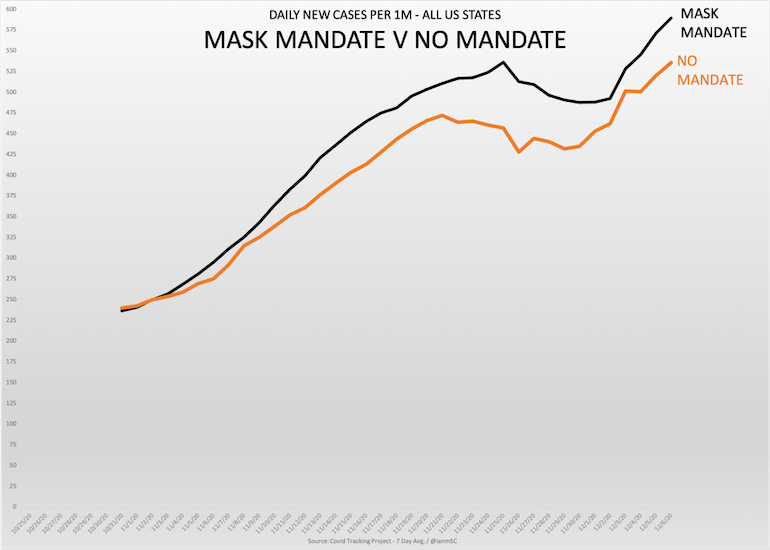 So there you have it, incontrovertible data evidence that mask mandates do little to nothing to stop or even slightly curb the spread of COVID-19. If masks were the answer, wouldn’t you expect to see a drop in cases not long after mask mandates are implemented? At the very least, wouldn’t you expect to see cases level off and STAY leveled off? What you would NOT expect would be what has actually happened, for cases to spike as they have done since November seemingly all across the country, regardless of whether or not a mandatory masking policy was in place. —Townhall

First, it wasn’t a serious illness and didn’t show signs of person-to-person spread.

The experts were wrong.

First, the public wasn’t supposed to wear masks because they wouldn’t help us the way they help healthcare professionals.

That was Fauci — who just admitted that he was lying to us about herd immunity probabilities. But now? Now, masks are the be-all-end-all.

First, we were supposed to ‘slow the curve’ for fifteen days so that hospitals didn’t get swamped — now we’ve been shut down for the better part of a year… with a chance that we’ll still be doing this after fifteen months, by the time that all these vaccines get rolled out.

Isn’t it crazy how, for some reason, the absolute confidence in the authoritative dictates of the experts isn’t taken as gospel truth?

CNN’s ‘Cult Expert’: All of America Needs Deprogramming Because of Trump
January 19th, 2021 The Mental Recession

Leading The People To Empty Promises: ‘Q-Anon’ Just Another Psyop To Keep You Distracted
January 19th, 2021 Sons of Liberty Media