This refusal to adjudicate a question of conflict between States could only serve to inflame these unheard and unanswered questions.

If the case had been heard, and thrown out on its merits, that would be one thing. At least we could go home and mutter about whether the right call had been made or not.

But the question we’re left with now — where several specific instances of breaches of the Constitution have been called out — including breaches similar to those cited in Bush v. Gore — we are left with a different question.

Is the Constitution still anything more than a formality to which token allegiance is offered?

Trump made his thoughts known in the usual way… 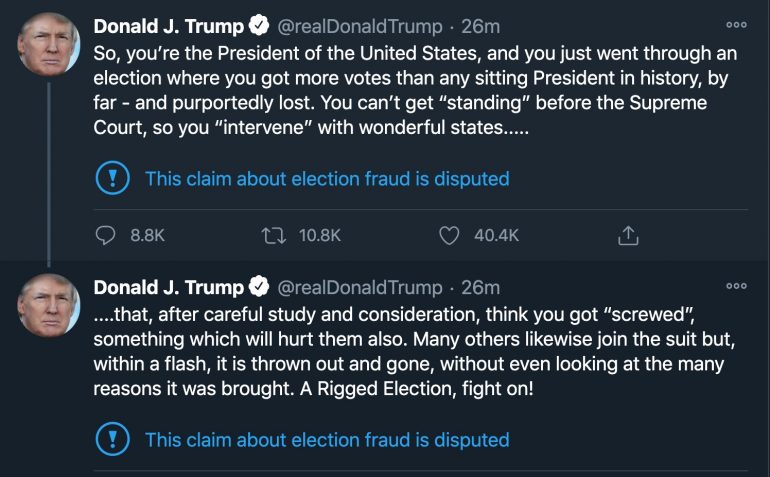 Sure, the news sucks. If it had been heard on its merits, there were some very specific points about violations of the Constitution that would, at the very least, have made for interesting decisions. Too many questions are left unasked and unanswered in the one court of the land with the authority to consider them.

Here’s some pretty solid commentary on what’s been going on with a couple of rowdy and mouthy guys who are just as fed up as the rest of us. We’ll continue with the particulars after their video, butif you need to get up to speed on the more general details of what’s happening, they’ll get you there, and put a smile on your face in the process.

Seven justices — including the three Trump appointed — refused to hear the case, which neither Alito nor Thomas believed that SCOTUS had the authority to refuse in this instance, being the ‘court of first impression’ for this dispute.

Well, so much for that ‘without fear or favor’ aspect of their oath. Seems like they caved to public pressure of actively framing Joe as the ‘winner’ instead of just a candidate waiting to hear the result.

News agencies are also misreporting the 2 dissenting judges’ wording, taking it to mean they would have ruled against him.

That isn’t what they said. How would a genuinely impartial judge even know that unless he was deciding his ruling before the case itself was heard? They DID say they wouldn’t have given any remedy, but as Mark Levin points out, that indicates they wouldn’t have offered any emergency relief before the fact. It says nothing about their final ruling, as they never had the opportunity to make one.

What does this mean for the fight to come?

The fight will continue. What shape that fight will take remains to be seen.

CNN’s ‘Cult Expert’: All of America Needs Deprogramming Because of Trump
January 19th, 2021 The Mental Recession

Leading The People To Empty Promises: ‘Q-Anon’ Just Another Psyop To Keep You Distracted
January 19th, 2021 Sons of Liberty Media