Ilhan Omar has a longstanding habit of excoriating people she doesn’t agree with.

This time, it was a case of friendly fire. It was not just a conflict within the Democrat fold. We’ve seen those before. It was a cat-fight within the Squad itself. 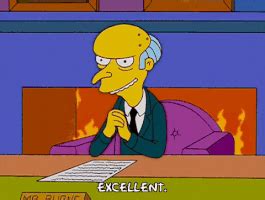 And what was the conflict about? The vaccine, of course.

Ilhan was blasting lawmakers for getting a shot if they were young enough that they were not in a significant risk category.

And this time, frankly, she’s making a valid point. Not every elected officeholder is in the high-risk category. 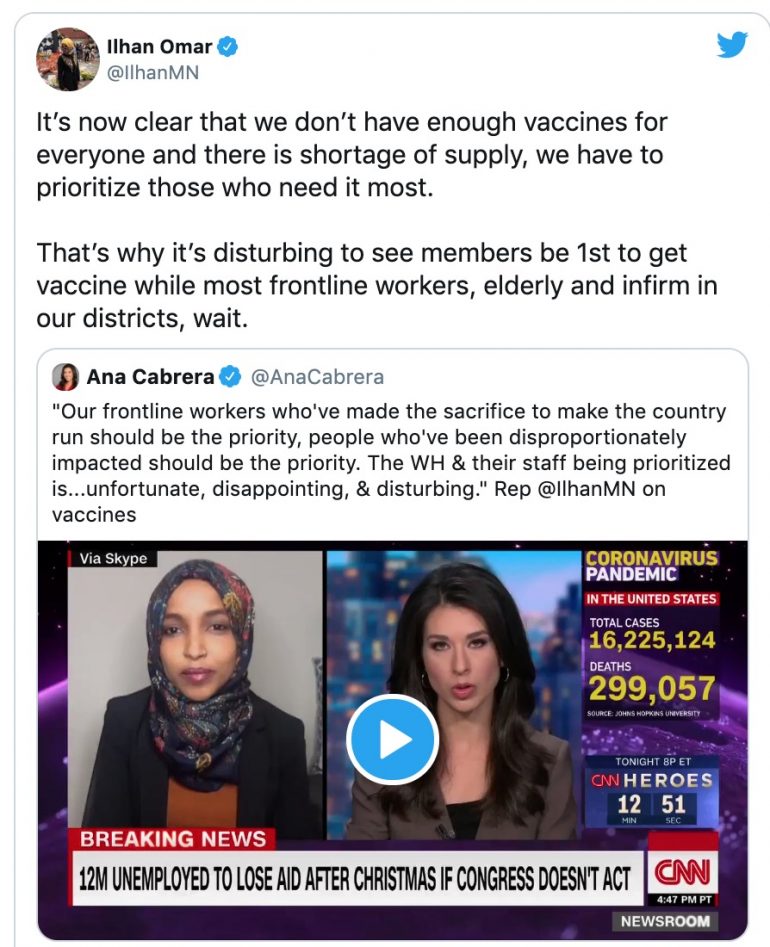 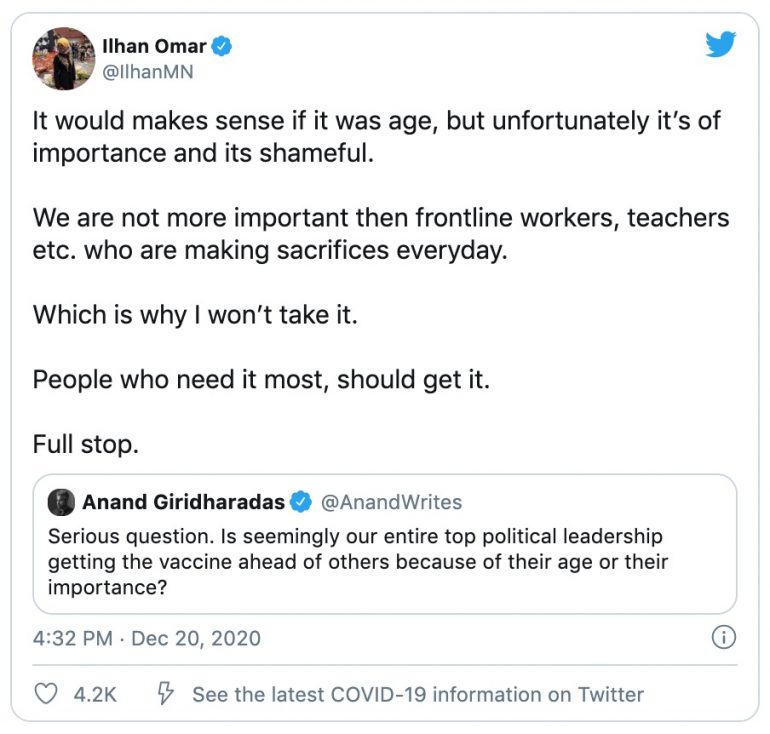 Seeing as she just received the vaccine herself, AOC found herself caught in the friendly (?) fire. 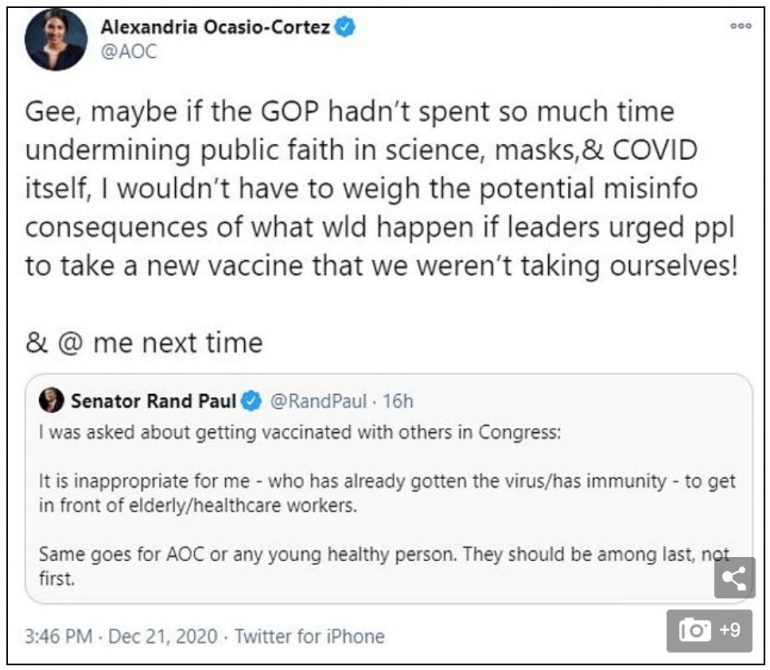 Someone who often snipes other Twitter users from the shadows has no right to demand that she receive the courtesy of being tagged in a criticism. That’s just the petty part of her response. The rest is outright lies.

The criticism she’s addressing here is the same criticism she got from both Ilhan Omar and Tulsi Gabbard. For once Ilhan was hitting someone with a good faith criticism.

Omar, whose father died in June due to COVID-19 complications, was joined in her criticism by Rep. Tulsi Gabbard.

“I planned to take the vaccine but will now stand in solidarity with our seniors by not doing so until they can. I urge my colleagues in Congress who are under the age of 65 and healthy to join me,” Gabbard said. –MSN

As for urging people to take the vaccine… are you serious? 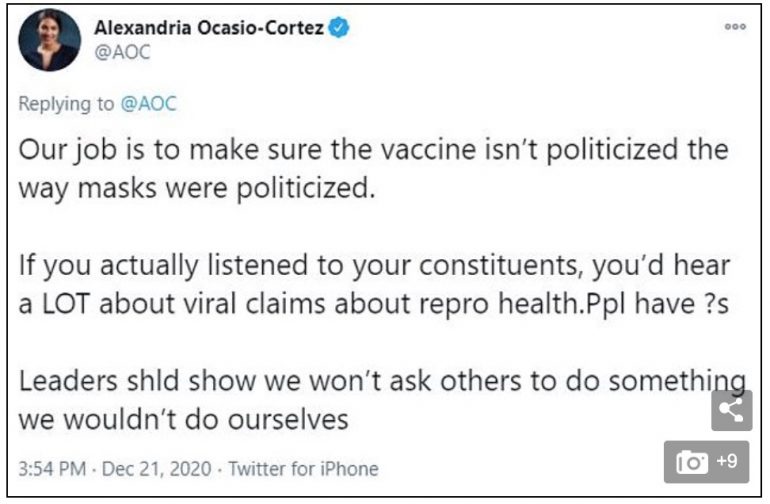 The vaccine WAS politicized, and not by the Republicans.

If undermining confidence in the vaccine — brought to you by the initiative of Operation Warp Speed (have you thanked Mike Pence yet) — is anti-science, than you need to point that skinny finger at a whole lot of folks with a (D) after their names, miss.

Does the name Kamala Harris ring a bell? In the debate leading up to the election she said, “But if Donald Trump tells us we should take it, I’m not taking it.”

Or that guy who spent October calling lids from his basement. How has he been contributing to public confidence in the vaccine?

Presumed Democrat presidential nominee Joe Biden this week indicated that U.S. President Donald Trump’s rush to develop a coronavirus vaccine in record time may not yield a safe and effective product that the public can trust.

“People don’t believe that he is telling the truth [about the safety of the vaccine candidates],” Biden asserted. “Therefore, they’re not at all certain they’re going to take the vaccine.”

“It’s not likely to go through all the tests and the trials that are needed to be done,” he added, referring to the potential vaccine. –Breitbart

How about the self-styled ‘heroic’ defender of New York state?

But while Cuomo griped publicly about the Trump administration, his team spurned an offer to meet with Azar late last month, who wanted to hear Cuomo’s concerns, two sources said.

Cuomo has claimed a vaccine would need to undergo a second round of checks in New York because efforts to fast-track it had been “politicized” and suggested it was “bad news” that the treatment wasn’t being distributed under an administration led Joe Biden, who Cuomo has described as a friend and who is currently the president-elect.

In a call with The Post on Monday, Cuomo’s staff said the governor was frustrated because there were “many unknowns” after the governor sent an Oct. 15 letter to President Trump asking how the vaccine would be effectively distributed to the whole state, particularly poor communities of color.

Trump directed Azar’s team to immediately reach out to Cuomo when they received the letter, offering a one-on-one meeting with Azar and the heads of Operation Warp Speed — which Cuomo or his team declined. FoxNews

Cuomo went on to announce his plans to block the vaccine rollout plan.

But Republicans need to be instructed on how to handle this vaccine rollout and help the public find confidence in the vaccine.

Priority should be given on a basis of need. Those with minimal risks or comorbidities can wait until the at-risk populations have been given their opportunity.