Q: How much power do leftists think the government should have?
A: More (Always.)

After years of accusing those of us who want LESS red tape, and LESS centralized government power, of being somehow ‘authoritarian’, what do we see in the very first week of the Democrats getting their ambitious little hands on the levers of power?

We see their big tech and media accomplices (who helped drag his carcass over the finish line with almost no help from the candidate’s part) singling out examples of Orwellian wrongthink for public disavowal, public denunciation (2 minutes of hate) and anyone who refuses to accept their speech codes get unceremoniously thrown off the internet.

That was before Biden even took office.

Let’s introduce what followed his swearing in with some damning words from Biden’s own mouth. The context here is admittedly different than the original, but the ultimate implication remains the same. 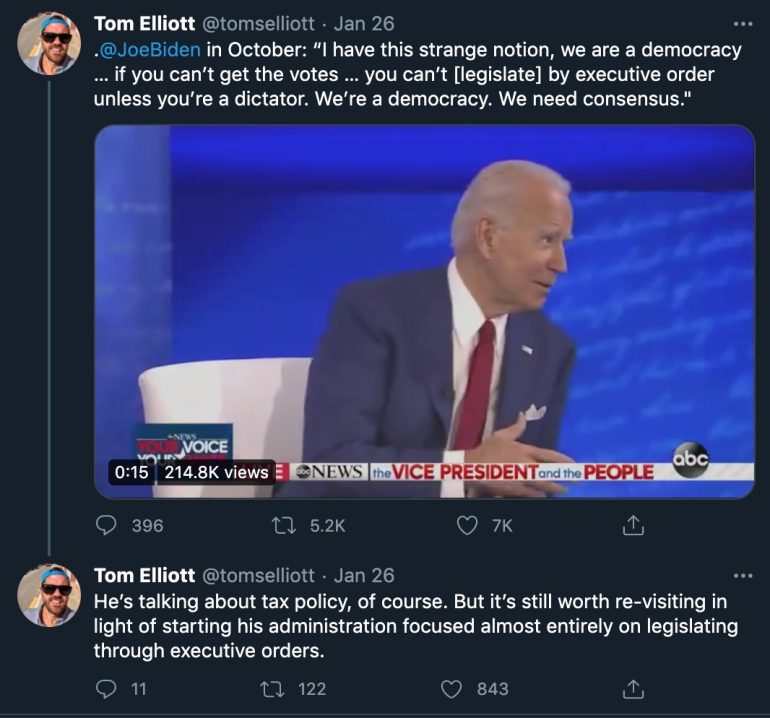 The link to that clip is here.

Alright. So only a dictator rules by fiat, right?

Skip ahead a few months to January when he is safely sworn in. What do we see?

President Joe Biden has issued more executive orders in his first week in office — not yet complete, as of this writing — than any of his 45 predecessors.

…The historical norm for most presidents appears to be no more than a few executive orders, if any, in the first week. The American Presidency Project at the University of California Santa Barbara confirms that no other president has issued as many as Biden — not even Franklin Delano Roosevelt, whose energetic first 100 days set a new standard for activity. —Breitbart

Or, if you prefer his OWN terminology, a ‘dictator’.

Interesting. But remember the question with which we opened this article.

How much power do Democrats think the government should have? More.

Now that it looks like their hopes of killing the filibuster have been dashed, Chuck You Schumer is looking for other ways to bypass any of the exact same resistance tactics they themselves initiated for the past four years.

They want total control, and politicians running roughshod over citizens’ rights for the past year in the name of ‘Coronavirus’ seems to have given the totalitarian hellscape that is his Machiavellian imagination some inspiration.

Schumer told MSNBC’s Rachel Maddow on Monday that Biden should declare a climate emergency and followed up on Twitter. Other Democrats have made similar calls in the past but not one as senior as Schumer.

“Now, Trump used this emergency for a stupid wall, which wasn’t an emergency,” Schumer said. “But if there ever was an emergency, climate is one. So I would suggest that they explore looking at climate as an emergency, which would give them more flexibility.”

…Schumer explained that if Biden declared an emergency he could “do many, many things under the emergency powers of the president that wouldn’t have to go through … that he could do without legislation.” –NewsWeek

Why operate within those pesky boundaries of Constitutional checks and balances in a razor-thin mandate when there is so much power to be had by simply coloring outside the lines?

Imagine everything that could be accomplished if he just did ignored the barriers of his Article II limitations and just did everything by Fiat like the way proper Emporer OUGHT to?

And while we’re at it, we’ll wrap ourselves in the flag and accuse Trump of threatening all of our most cherished institutions and acting like a … what was the word again?