Disturbing new video shows the carjacking that caused the death of an UberEats driver in Washington on March 23.

Mohammad Anwar, 66, of Springfield, Virginia came to the U.S. in 2014 from Pakistan. He delivered food to support his family. On Tuesday, March 23, he was doing his job making deliveries for UberEats in Washington, D.C., when two teen girls, aged 13 and 15, tased him in an attempt to steal his Honda Accord.

Carjackings by teens have been on the rise in D.C. in the past year with so many high schoolers not in class due to school closures.

The 90-second video was taken by a witness to the events and shows just how quickly things became deadly. The recording starts with Anwar saying, “They’re thieves. This is my car!” as he was trying to pull one girl out of the driver’s seat.

The teen then hit the gas with the driver’s side door open and Anwar holding on speeding down the 1200 block of Van Street SE.

Shortly after speeding off, the driver’s side of the car smashes into a metal fence crushing Anwar between the car door and the vehicle itself.

The person filming is heard saying, “Call the cops! They’re stealing his car.”

It then speeds out of view around a corner when a loud crash is heard. The bystander then runs to see what happened and the car is on its side, Anwar has been thrown from the vehicle and is lying motionless facedown on the sidewalk. The girls climb out of the passenger side window and one is heard saying that her phone is still in the car. She doesn’t seem to pay any attention to the motionless Anwar.

The girls tried to run away, but two National Guardsmen detained them until the police arrive and kept bystanders from the wreckage.

Appalling footage of the carjacking near Nationals Park in Washington D.C. on Tuesday that resulted in the death of Pakistani immigrant & Uber Eats driver Mohammad Anwar. The teenage girls who police say used a Taser to steal the car face murder charges.pic.twitter.com/mOPnrLBf0t

It’s unlikely that the race of the perpetrators and the victim will be widely reported by the corporate media. They don’t tend to report that when it doesn’t fit their narrative.

Here is the photo that we used as the featured image for this article showing the wrecked car and the body of Anwar lying on the sidewalk blurred out in the top right of the image. 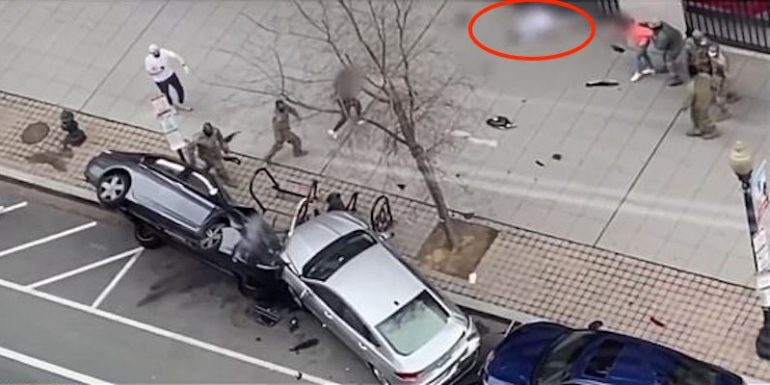 Anwar was eventually rushed to a hospital but could not be saved. He was ejected onto the sidewalk and sustained fatal injuries, including head trauma and broken bones.

The Metropolitan Police Department described the suspects in the felony murder and armed carjacking as a 13-year-old girl from Southeast DC, and a 15-year-old girl from Fort Washington, Maryland. They have not been named because they are juveniles.

Family members said Anwar immigrated to the US from Pakistan in 2014 and worked in food delivery to provide for his wife, three adult children and four grandchildren.

‘The family is devastated by this senseless crime,’ relatives said in a statement. ‘Mohammad Anwar was a father, a grandfather, a husband, a brother, and uncle beloved by many here in the United States and in Pakistan, his birth country.’
Source: Daily Mail

Auto theft is a crime of opportunity. Follow these steps to reduce the risk of your vehicle becoming a target.

That is grotesque and one of the most tone-deaf things to post in the wake of a senseless tragedy.

CNN is currently being ripped on social media for using the word “accident” in their reporting.

I watched the footage. The word “accident” has no place here. https://t.co/NbSAuIlQmA

Murders are accidents that lead to fatal injuries.

#GeorgeFloyd was a career criminal who was turned into a martyr, got four funerals & tens of millions $$$ in donations

While CNN continues to get pummeled for their word selection, it’s important to note that the DC police called it an accident.

Police department called it an accident. Can’t legally call it a homicide until the police conclude that or CNN can get sued. I think we can all agree these girls need to be tried as adults and pay the price behind bars. Disgusting.

That said, how many articles and reports did you see that called the Atlanta shooting an “Anti-Asian” crime? 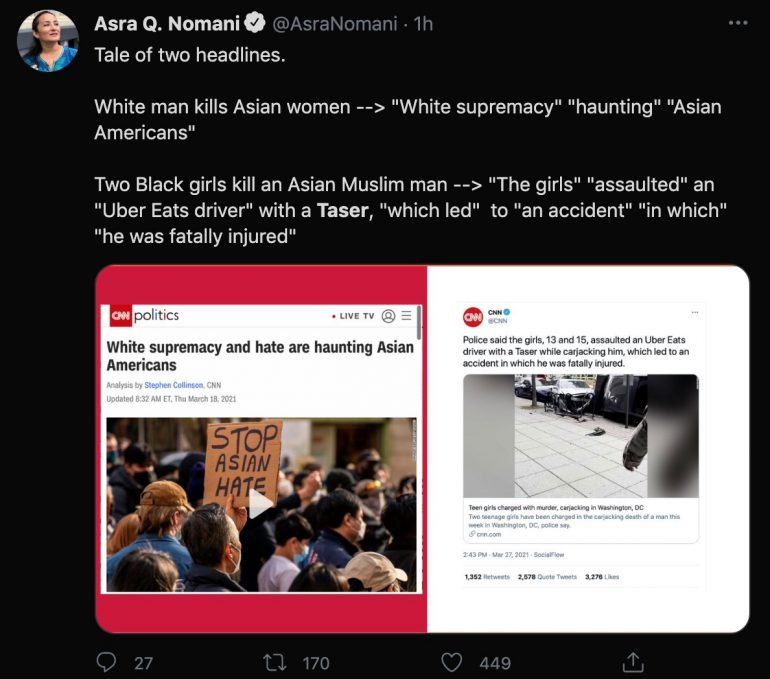 Is this also a hate crime?

While we are told that the United States is a terrible, racist country, and those on the right are the worst offenders, the GoFundMe campaign set up by Mohammed Anwar’s family to have a proper Islamic funeral for him has already raised over $440,000 at the time of writing — more than 4 times the original goal.

It’s being tweeted and retweeted by former Trump administration officials.

Former FCC Director Ajit Pai also tweeted about the GoFundMe campaign as he shared the video.

This was a senseless crime committed by selfish teens who had nothing better to do because schools are still closed a year into this pandemic. An innocent man is now dead.

If you can with the GoFundMe to Help the Anwars Find Peace, please consider doing so.