It’s one thing to wring your hands over the treatment of foreign children as they enter America. It’s quite another to see children in danger and take positive action.

Congrats, Joe and Kamala, not only are you on the ‘wrong side of history’, the same Alex Jones your side so gleefully had canceled just proved that HE is on a more secure moral high ground than the leadership of your whole damned administration combined.

It doesn’t really matter WHAT you think of Alex Jones either as a person or as an online persona.

On this particular day, and in this clip with a load of children dangerously loaded into a van by an adult from some unnamed organization, an adult who refused to identify himself, Jones has shown himself to be the kind of hero we would hope EVERY American would step up and be in this situation.

He stopped them from driving off, and he called the police. Police removed the tykes from the back of the van. 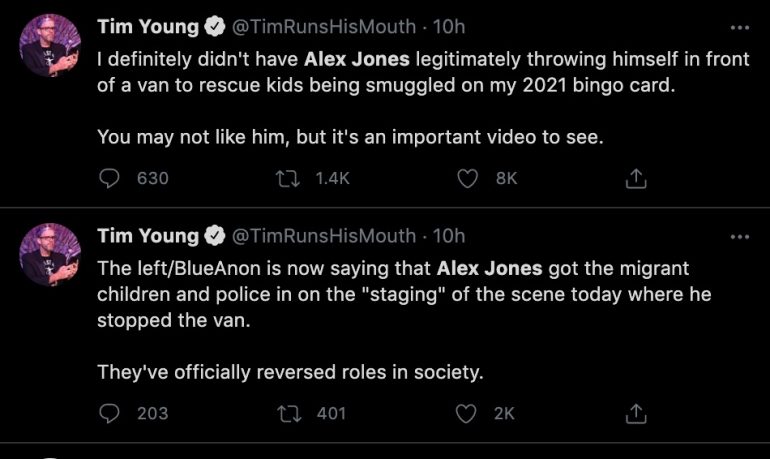 It doesn’t take much imagination to know what could have gone wrong in this situation, even if turns out he did have lawful custody of that vanload of little ones.

If Joe and Kamala won’t listen to reason, maybe they can listen to shame.

Alex Jones just made them look morally bankrupt and uncaring.

Is it because their administration is racist, incompetent, uncaring, or power-hungry?

Whatever answer they go with, there goes the left’s favorite narrative of being the defenders of the little guy and the vulnerable.

Who could be littler and more vulnerable than the kids in this clip?

Aside from babies, whether outside or inside the womb, that is?