Israel has a recognized terrorist group drop thousands of missiles on the heads of Jewish Communities, and ISRAEL is the one being investigated for war crimes?

Even Joe Biden accepted that Israel had responded to the attacks of an aggressor, and had picked their targets in a measured and reasonable way. Even that controversial airstrike in a building occupied by media was long since reported to have known that Hamas was using that building for strategic purposes. In other words, the media knew and understood they were being used as human shields.

Despite all of that, warning was given to the building that an airstrike was imminent, and nobody died.

The watching world may have wondered why, after such apparent setbacks as Hamas appears to have suffered at the hands of Isrealis in this conflict, that they seemed to declare victory? Could it be because they were looking for propaganda win, not a military one? Something that could leverage and mobilize the world against Israel, so that the ‘international community’ could fight there battles FOR Hamas?

Is THIS the ‘win’ they were hoping to secure?

The United Nations Human Rights Council voted 24-9 Thursday to launch an investigation against Israel for alleged war crimes, including during the recent war against Hamas in the Gaza Strip, and called for an arms embargo against the Jewish state.

…It marks the first time that the UNHRC created a permanent fact-finding mission with respect to any UN member state. Israel’s Foreign Ministry immediately stated that it had no intention of cooperating with the probe.

A UN watchdog group, headed by Hillel Nueur pushed back against this policy. Here is part of a thread (click here for the rest, including a short video) 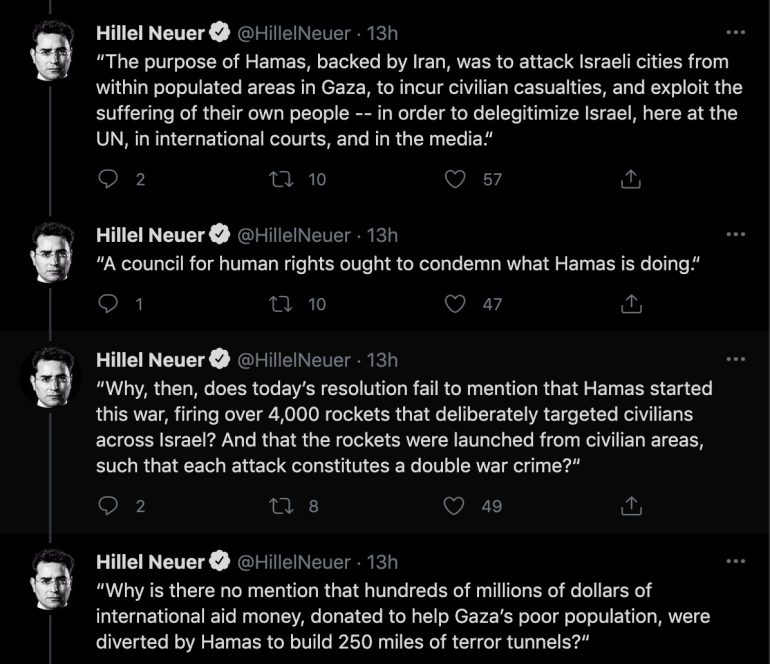 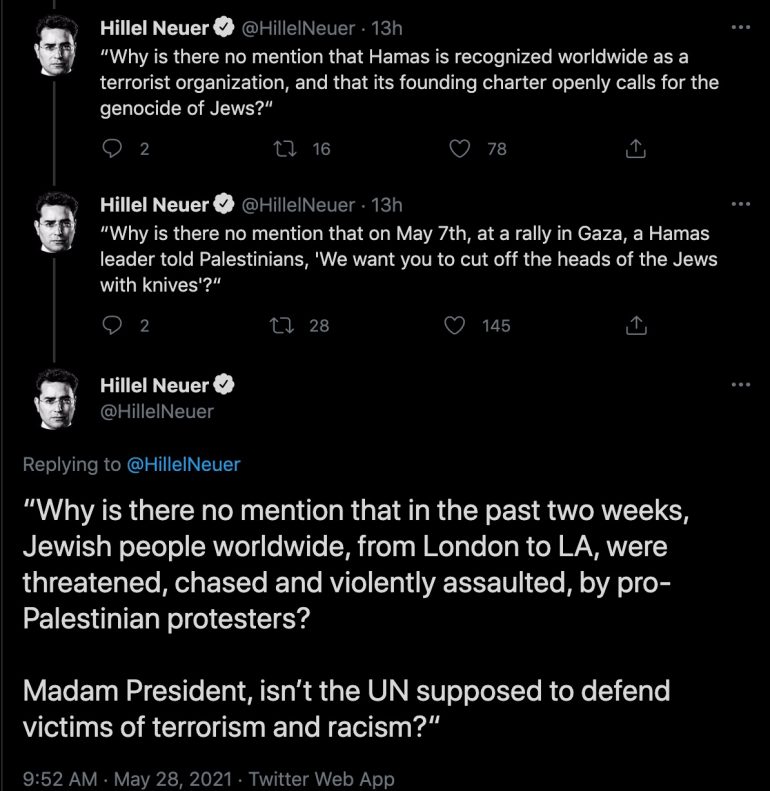 Meanwhile… in America, we learn that one of the BLM co-founders once called for the actual end of Israel. The trained Marxist has intuitively sided with the recognized terrorist group… one can only imagine what implications that dynamic might have for the culture of the group itself.

Cullors, who recently announced her resignation from the Black Lives Matter (BLM) Global Network Foundation, explicitly called for “the end” of Israel at the event:

“Palestine is our generation’s South Africa, and if we don’t step up boldly and courageously to end the imperialist project that’s called Israel, we’re doomed.”

“We could have a whole conversation about the settlements that we witnessed and the stories of murder and death at the hands of Israelis and Zionists,” she adds before describing Palestinian solidarity as “crucial” to the BLM movement. —NationalPulse

Come to think of it, there are some elected Democrats who sound just like her, aren’t there?

Does that make those Democrats terrorist-loving antisemetic bigots?