Gee, who could have possibly seen this coming?

It’s almost like the change in policy at the border had something to do with the increase in people crossing the border illegally.

Sure, the pandemic played some role in the lower number last year, but the Presidents of Mexico and Guatemala have both said that the Biden-Harris admin’s changes in border policies from what they were under Trump have encouraged people to try to migrate illegally.

The numbers are staggering.

Illegal border crossings have exploded by 674 per cent in a year, with 180,034 recorded in May – the fourth consecutive monthly rise.

Newly-released figures from U.S. Customs and Border Protection show the number of migrants rocketed by more than six-fold from the 23,237 who crossed from Mexico into the United States in May 2020.

Last year’s number was far lower than usual because of the COVID-19 outbreak, but this year’s figures still spell worrying news for Joe Biden, with 2021 on-track to record the highest number of illegal border crossings since 2006.

The visual is even more staggering. 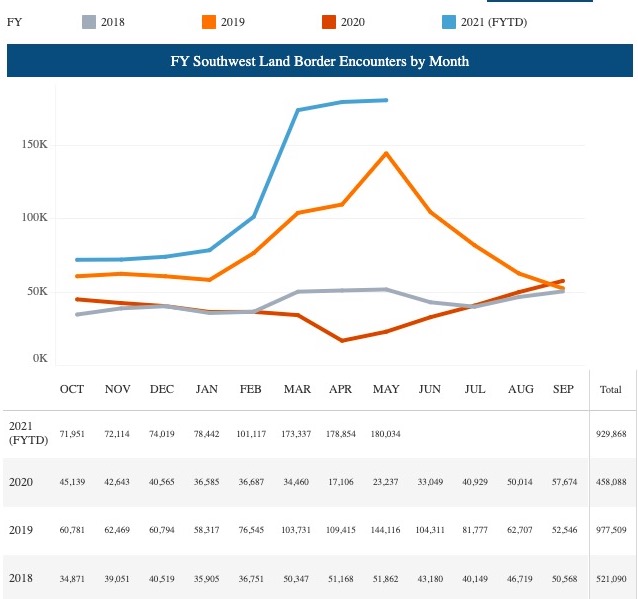 These aren’t people seeking asylum because of disasters as VP Kamala Harris has claimed. They’re economic migrants looking for a better life. The vast majority are rejected because they don’t actually qualify for asylum.

And if asylum claims are based on “looking for a better life” then the entire world would be at America’s doorstep. Oh, wait…that’s already happening.

More than 40% of the illegal border-crossers are coming from Mexico and the Northern Triangle countries of Guatemala, Honduras, and El Salvador, but there has also been an increase in people coming from Ecuador, Venezuela, Cuba, Haiti, and other parts of the world as well.

CBP also said that a majority of those who crossed the border were already expelled due to Title 42, which allows the U.S. government to quickly remove people using the COVID-19 pandemic.

CBP also pointed out, according to Fox News, that Title 42 is leading people to try to cross the border more than once, which could also factor into the high numbers.

Axios reported Tuesday that premlinary CBP data from the fiscal year 2021 showed that illegal crossings have been the most since 2006 – with four months still to go.
Source: Daily Mail

The New York Times explains that “Title 42, allows border agents to turn away migrants at the southern border without giving them a chance to apply for protections in the United States. The order justifies the expulsions as a health measure to prevent the coronavirus from spreading in holding facilities.” Of course, this move is being criticized as “inhumane” by Open Borders advocates.

Even with that happening, the facilities are still overflowing and people are still being moved all over the country.

Heck, they might even be moved to another country — Canada.

Reuters reports that Canada’s Immigration Minister says that the country is prepared to “help out” by taking in a bunch of Central American migrants.

Canada is prepared to take in some Central American migrants to help the United States, which is grappling with an influx of migrants at its southern border with Mexico, Canadian Immigration Minister Marco Mendicino said. In their first phone call since President Joe Biden’s administration was sworn in, Mendicino and U.S. Secretary of Homeland Security Alejandro Mayorkas last week discussed issues including Central American migration – an area where the Biden administration is struggling to gain control.
Source: Reuters

So, now the problem is so bad that the U.S. might send migrants off to Canada — but it’s not a “crisis” according to the White House or the Corporate Media.

What we could really use is some leadership and policies that work, but unfortunately, that was voted out of office in November 2020.