Oh, look at that! The “Blame America” crowd has found a way to blame America for the Cuban Communist Regime’s disgusting suppression of their own people. Shocker.

After days of silence, the “Democratic Socialist” Congresswoman from Brooklyn’s 14th Congressional District finally spoke out about the anti-communist protests in Cuba… but she found a way to blame America.

After just two short sentences condemning the current Cuban dictator’s actions, Rep. Alexandria Ocasio-Cortez says that it’s really the fault of the decades-long U.S. embargo that is causing the Cuban people to suffer, not the totalitarian communist regime. She called the U.S. embargo “absurdly cruel” and said that “the cruelty is the point.”

…AOC’s response to the crisis in Cuba mirrors a Black Lives Matter statement on Thursday, which blamed the ‘cruel and inhumane’ US for the current unrest in Cuba and praised the Communist regime for its ‘solidarity’ with oppressed people.

BLM accused the US of causing the instability with its embargoes which have caused ‘pain and suffering’ for Cubans for 60 years in the message which was branded ‘worse than embarrassing’.

The Bronx Congresswoman tweeted after she and former presidential candidate Bernie Sanders came under fire for their lack of public response to anti-government protests that began in Cuba over the weekend.
Source: Daily Mail

In her statement, she wrote:

We are seeing Cubans rise up and protest for their rights like never before. We stand in solidarity with them, and condemn the anti-democratic actions led by President Diaz-Canel. The suppression of the media, speech and protest are all gross violations of civil rights. We must also name the U.S. contribution to Cuban suffering: our sixty-year-old embargo. Last month, once again, the U.N. voted overwhelmingly to call on the United States to lift its embargo on Cuba. The embargo is absurdly cruel and, like too many other U.S. policies targeting Latin Americans, the cruelty is the point. I outright reject the Biden administration’s defense of the embargo. It is never acceptable for us to use cruelty as a point of leverage against everyday people.

We stand in solidarity with the Cuban people and condemn the suppression of the media, speech and protest.

We also call for an end to the U.S. embargo and additional Trump-era restrictions that are profoundly contributing to the suffering of Cubans. pic.twitter.com/Fw6Quv5TAN 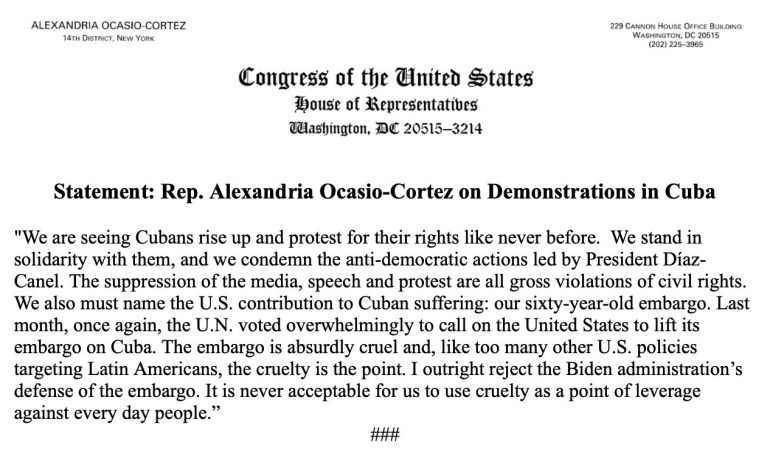 AOC seemed to have been somewhat inspired by the Black Lives Matter organization’s statement on Cuba that was released late on Wednesday.

They take more direct aim at the U.S. in their statement, but as a lawmaker, AOC can’t quite get as bold as her ideological comrades.

Black Lives Matter condemns the U.S. federal government’s inhumane treatment of Cubans, and urges it to immediately lift the economic embargo. This cruel and inhumane policy, instituted with the explicit intention of destabilizing the country and undermining Cubans’ right to choose their own government, is at the heart of Cuba’s current crisis. Since 1962, the United States has forced pain and suffering on the people of Cuba by cutting off food, medicine and supplies, costing the tiny island nation an estimated $130 billion.

Without that money, it is harder for Cuba to acquire medical equipment needed to develop its own COVID-19 vaccines and equipment for food production. This comes in spite of the country’s strong medical care and history of lending doctors and nurses to disasters around the world.

The people of Cuba are being punished by the U.S. government because the country has maintained its commitment to sovereignty and self-determination. United States leaders have tried to crush this Revolution for decades. Instead of international amity, respect, and goodwill, the U.S. govenrnment has only instigated suffering for the country’s 11 million people — of which 4 million are Black and Brown.

Now, we look to President Biden to end the embargo, something Barack Obama called for in 2016. This embargo is a blatant human rights violation and it must come to an end.

Black Lives Matter has released a statement on Cuba: pic.twitter.com/NgnT1o1oZE 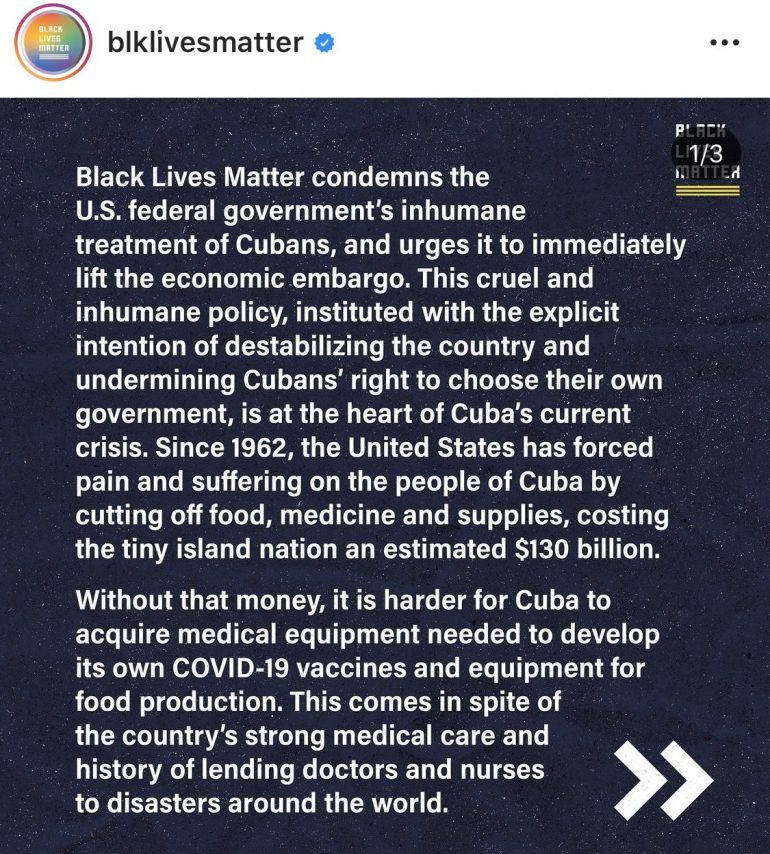 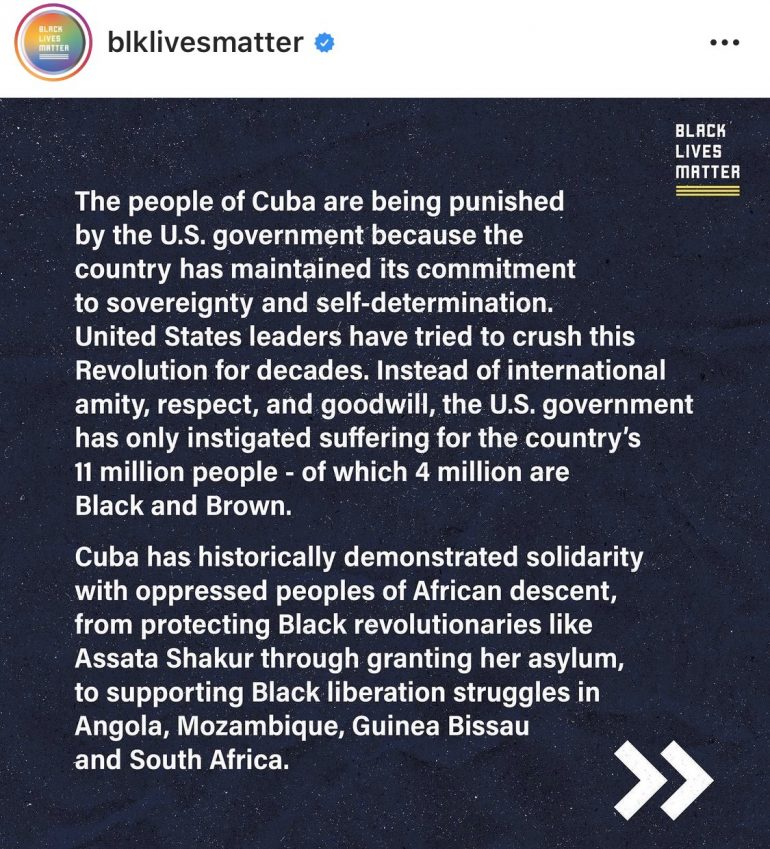 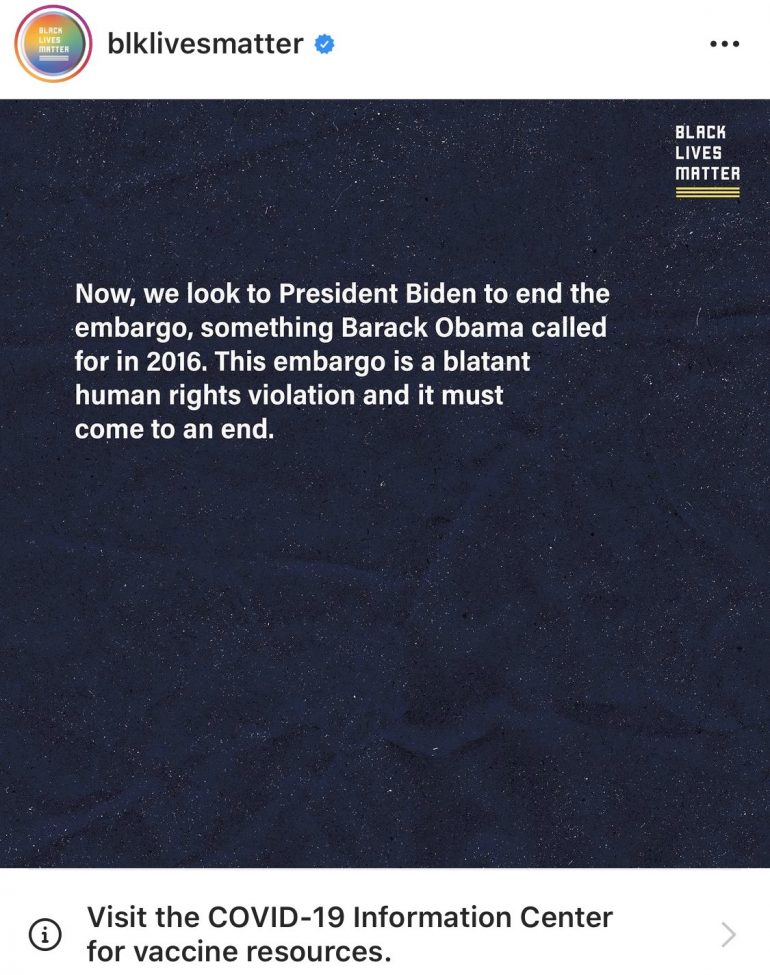 What a load of anti-American B.S.!

Perhaps the best part is where Black Lives Matter exposes exactly who they are in their praise of Cuba granting asylum to Assata Shakur, a domestic terrorist and convicted cop-killer, who has been a fugitive from justice for over 45 years.

You can see that AOC and BLM used similar language in their statements. That is very interesting.

Aren’t these the same people that support the “Boycott, Divestment, and Sanctions” (BDS) movement against Israel? And they’re calling the U.S. embargo “cruel” and a “human rights violation”? Didn’t AOC say that “the cruelty was the point”? It looks like they accidentally said the quiet part out loud in their condemnation of official U.S. foreign policy against a hostile regime and the leftist mob going after the only functional democracy in the Middle East that just happens to be a Jewish state. Oopsie.

But then, you shouldn’t be surprised that rabid leftists accidentally expose their own “cruel” — their word, not mine — motivations when critiquing policies that they disagree with. It’s funny that they even do it when the policies were, historically, bipartisan. The embargo was enacted by President Eisenhower and expanded by JFK.

Ah, but this is the key problem with progressivism… it is never satisified. Even the leftwing views of 60 years ago must be considered “conservative.”

Let’s not forget that the Castro regime was boldly anti-American and overtly hostile. Does anyone on the left remember that whole Cuban Missile Crisis thing?

AOC and BLM activists also apparently don’t realize that the U.S. embargo actually allows humanitarian relief with things like food and medicine. Cuba is a greedy, corrupt one-party state that suppresses any dissent, and the pandemic has hit their tourism industry hard which is exacerbating the ongoing problems there.

It should be no surprise that the people who praise socialism and communism — and want to bring that to America — don’t want to condemn the atrocities and human rights violations in places run by their ideological allies. After all, it might make people consider what it is that they’d be getting in a “Democratic Socialist” America.