When those who are supposed to be protecting the nation from threats are, themselves, engaged in a game of misdirection what would you EXPECT is going to happen?

What if ‘official sources’ are so busy telling us what we’re supposed to believe about racial strife in America, they have neglected to tell us what is actually going on?

If you only got your news from Biden’s administration, his servile media, and the information overlords over in Silicon Valley, you might just as convinced as AOC that an evil army of Neo-Nazi skinheads lurks around every corner ready to burn and pillage everything upon which this nation was built.

You might ALSO have come believe that this shadowy group of dangerous, violent bigots have entirely cornered the market on racially motivated violence.

That narrative is so pervasive that one CNN employee began researching the demographics of those perpetrating anti-Asian violence, until he realized that those figures told the ‘wrong’ narrative. Uncomfortable with the implications, he quickly buried what he found. He said so himself in this video: PART 3: Project Veritas Shows CNN Is Deliberately Stoking The Fires Of Racial Strife (VIDEO)

Let’s see how these narratives stack up against actual events. Here we have a case of actual antisemitism in which a Rabbi was attacked with a knife in broad daylight. Fortunately, he lived through the ordeal.

Awad allegedly stabbed Rabbi Shlomo Noginksi eight times on the street outside Shaloh House, a Jewish Day School and synagogue on Chestnut Hill Avenue in Brighton, at around 1.19pm on Thursday afternoon.

Rabbi Noginski, who is a teacher and rabbi at the Shaloh House, was reportedly sitting outside talking on his cell phone when the suspect launched his attack on him.

The rabbi’s family and community leaders believe he was targeted in the attack because he is Jewish, reports Fox News. –DailyMail

Just a quick glance at his photo is enough to tell us that the attacker doesn’t neatly into the left’s favorite ‘white supremacist’ narrative. 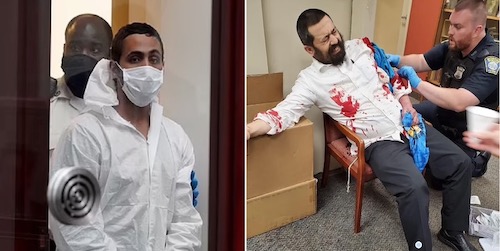 The accused attacker is, obviously, the guy on the left. The photo on the right is of a good guy cop helping the rabbi back together.

Dov Hikind, a former New York state assemblyman and founder of the grassroots coalition Americans Against Antisemitism, told Fox News he spoke with Rabbi Noginski’s brother, who said the rabbi is expected to undergo surgery for eight stab wounds.

Hikind said the rabbi’s family believe he was targeted because he is Jewish.

Hikind said anti-Israel rhetoric has contributed to a rise in anti-Semitic attacks and singled out Democrat Representatives Ilhan Omar, Alexandria Ocasio Cortez, Ayanna Pressley and Rashida Tlaib for their comments.

A knife and gun were allegedly found in a nearby alley where police arrested Awad, reports WCVB. —DailyMail

If this writer were a betting man, he would be willing to bet a steak dinner that Mr. Awad has never once received the sort of targeted Facebook messages Zuckerberg has been hitting Republicans and ‘white supremacists’ with about the dangers of being caught up in extremism.

What follows is just a partial list of some of the stories that, if the media gave them a fair hearing, would totally undermine their stated intent of pounding a narrative of racial division deep into the American psyche.