Imagine the Eye of Sauron were staring up at you from the ocean. Now make it bigger and turn it into a raging fire boiling the sea. Now you’ve got an idea of what we’re dealing with here.

And as scary as THIS image of fire and destruction is… 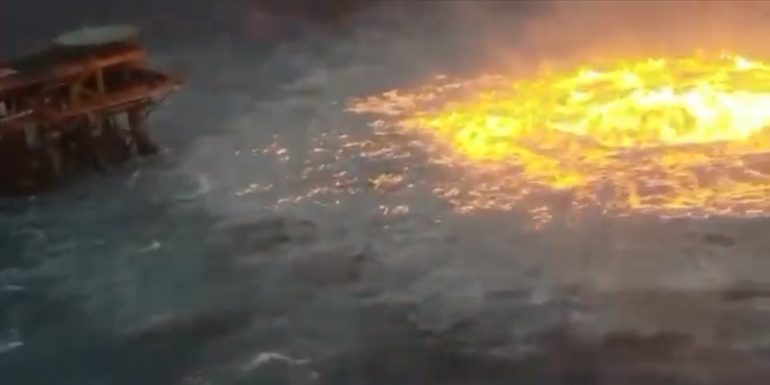 That’s the scale of what we’re dealing with. Here is some airial footage both daytime and night time for a better sense of what exactly is going on.

The cause hasn’t yet been determined. And the fact that it was natural gas, rather than oil, means we don’t need to deal with the issues we normally associate with oil spills.

The bright orange fire west of the Yucatan Peninsula was sparked by a leak from an underwater pipeline, according to Mexican state oil company Pemex.

It took more than five hours to fully contain the blaze, which broke out near a Pemex oil platform at around 5:15 a.m., authorities said. No injuries were reported.

Company workers used nitrogen to control the inferno, which resembled molten lava swirling on the water.

Dramatic footage of the incident was trending on Twitter Friday, with users dubbing it an “eye of fire,” due to its circular shape. –NYPost

The guys whose job it is to put out a fire like that? Dayum. That’s badass.