President Biden now has the blood of 11 Marines and a Navy medic on his hands as well as dozens of civilians desperately trying to get out of Afghanistan before August 31.

UPDATE: The death toll was updated to 13 Servicemembers killed after this article was published.

US official says that number has now increased to 13 US troops killed.

ISIS followed through with several suicide bombings on Thursday. Two bombs went off outside of Hamid Karzai International Airport where thousands of people have gathered to try to leave the country as the Taliban takes over.

One bomb went off at the Abbey Gate on the south side of the airport, and another at the Baron Hotel next to the airport.

There had not been a death of a U.S. servicemember since February 2020.

The White House was silent for hours.

At the time of writing, more bombs were being reported.

The US is vowing to continue its Afghanistan evacuation mission despite ISIS suicide bombers killing 12 troops on Thursday, and amid ‘active’ additional threats of further attacks but President Biden is yet to address the attacks, leaving it up to the commanding general on the ground in Kabul to brief the world’s media on Thursday.

Two suicide attacks at Kabul airport on Thursday killed 11 Marines and one Navy medic along with dozens of Afghans. The first bomber was wearing a vest and was being searched by troops when he detonated. The second was a car bomb attack.

It’s unclear how the suicide bomber in the vest got through Taliban checkpoints and close enough to the Marines t kill them.

President Biden has still not commented on the deaths, the first American lives lost since his disastrous evacuation effort started on August 14, but on Thursday General Kenneth F. McKenzie, the commander on the ground, spoke to reporters.
Source: Daily Mail

The Brits were also reporting on the devastating attacks with some horrifying images:

Gen. McKenzie of U.S. Central Command gave a briefing and confirmed the deaths of U.S. troops.

The attack was followed by “ISIS gunmen who opened fire on civilians and military forces. At this time, we know that 12 US servicemembers have been killed in the attack.” pic.twitter.com/pNtaF8xf22

During the presser, Gen. McKenzie says that the United States is “working with the Taliban.” It’s rather jarring to hear.

It’s bizarre listening to the commander of CENTCOM say we are relying on the Taliban to protect us and we are sharing intelligence with them.

Four US Marines killed, half a dozen severely wounded in the Kabul terror attack.

Biden has blood on his hands.

#BREAKING A blast just took place in Ahmad Shah Baba Mina, 12th PD of Kabul city. This is the fourth blast in one day coupled with an ongoing firefight in the west of the city.#Afghanistan

POLITICO is reporting that U.S. officials in Kabul essentially gave the Taliban a “kill list” of Americans and Afghan allies.

U.S. officials in Kabul gave the Taliban a list of names of American citizens, green card holders and Afghan allies to grant entry into the militant-controlled outer perimeter of the city’s airport, a choice that’s prompted outrage behind the scenes from lawmakers and military officials.

The move, detailed to POLITICO by three U.S. and congressional officials, was designed to expedite the evacuation of tens of thousands of people from Afghanistan as chaos erupted in Afghanistan’s capital city last week after the Taliban seized control of the country. It also came as the Biden administration has been relying on the Taliban for security outside the airport.
Source: POLITICO

This is the same kind of thinking that had Biden give Putin a list of things that shouldn’t be hacked at the G7.

The United States of America was relying on the Taliban to secure checkpoints.

“It’s like Biden is in a fugue state. Paralyzed. Totally MIA over rapid changing news” – per WH official

POTUS 45 issued a statement on the loss of a dozen U.S. Servicemen before the sitting President said a word.

“Melania and I send our deepest condolences to the families of our brilliant and brave Service Members whose duty to the U.S.A. meant so much to them. Our thoughts are also with the families of the innocent civilians who died today in the savage Kabul attack,” it said.

“This tragedy should never have been allowed to happen, which makes our grief even deeper and more difficult to understand,” read the statement. It ended, “May God Bless the U.S.A.” 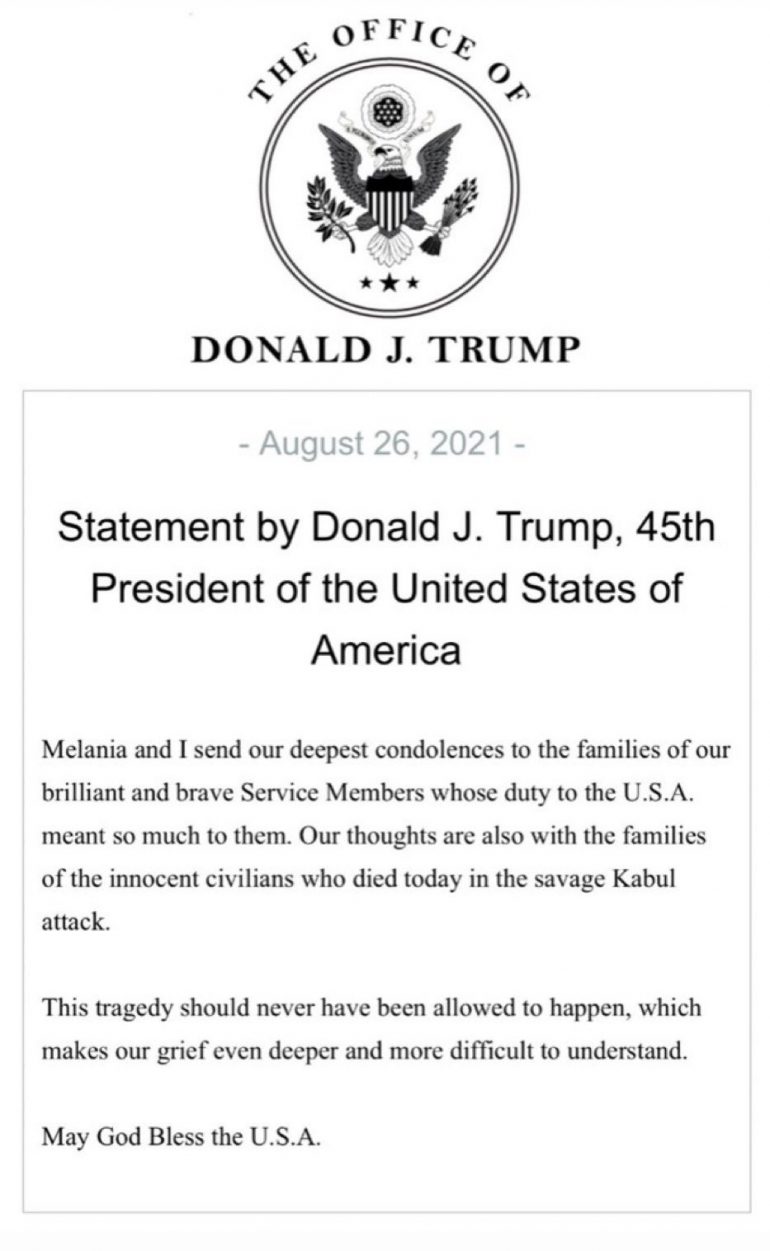 The current President of the United States was silent all day, as was the White House Press Secretary.

The President has blood on his hands.