With questions about abortion coming before the Supreme Court, the left is closing ranks to protect their very favorite sacred cow.

Why wouldn’t they? Planned Parenthood dumps untold millions into races that help get Democrats elected. If that income stream ever dries up, so will their cut of it.

Not to worry, their buddies in the media will come to their rescue with a … clown?

Even the setup for this bit was heavy-handed.

Using SNL’s tried-and-true ‘news’ bit, they had the guy in the suit introduce the story, talking about the case being heard in the Supreme court. It was introduced as the ‘controversial Texas law that essentially bans all abortions after just six weeks. Here to cheer us up, well this can’t be right, is Goober the clown who had an abortion when she was just 23.’ *applause*

To ‘cheer us up’ from the fact that SCOTUS is hearing a case.

Goober the Clown
(who had an abortion when she was 23) pic.twitter.com/1rFv6UrPGu

Yikes. No wonder so many people have a fear of clowns.

Here’s just a little more of the, uh, ‘witty’ dialogue you can expect to hear if you click on the video…

Well really I don’t, but people keep bringing it up, so I’ve got to keep talking about freaking abortion. But it’s a rough subject so we’re gonna do fun clown stuff to make it more palatable. (spins bowtie).

…’and I wish I didn’t have to do this, ’cause the abortion I had at 23 is my own personal clown business but that’s all some people in this country want to discuss all the time even though clown abortion was legalized in Clown v. Wade in 1973…’

If none of that was creepy enough for you, just wait until she gets started about ‘clown-cest’.

‘Some’ people can’t stop talking about abortion? She’s saying that in NYC, right? What, she doesn’t remember THIS…? 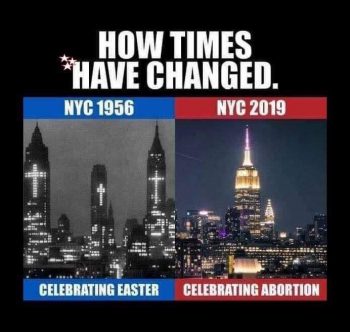 Most of the American public, including Democrats, have a negative opinion of third-trimester abortions. That hasn’t stopped them from doing their damndest to push culture from the ‘safe legal and rare’ of Bill and Hillary Clinton in the 90s to ‘shout your abortion’, and wanting it legal at any time for any reason.

Pro-abortion activists have become so emboldened that they aren’t even arguing that it is not a baby anymore… they are saying it doesn’t matter if it’s a baby, it only matters if the mother doesn’t want the baby.

And some of us even remember that Governor Northam ducked an infanticide scandal by having his yearbook photos suddenly released as the lightning rod that attracts the public attention. Gov. Northam Dodges Infanticide Scandal, Gets BBQ’d For Racist Yearbook Pics

SOMEBODY sure is talking about abortion.