Marxism, we must remember, is an expressly revolutionary movement. It is intent on calling people out of what they have known and ‘forward’ into a radical and uncertain future.

But getting people to embrace such a future requires some preparation. The public will have to be trained to embrace the new vision and reject their past.

Projects like that require a heavy dose of propaganda to ‘reimagine’ the things we think we know, whether that is the glories of a country you want to subvert (think: 1619 Project) or the failures and excesses of the regime that promises to deliver a utopian dream.

Erasing (or at least scapegoating) any failures and excesses of the Party are an important part of that revolutionary spirit, this is why so many Communist countries quickly devolve into police states where relatives will betray one another to the secret police. Children are taught in school that loyalty to the State is even more important than loyalty to your own relatives.

While corporations like Hollywood, Nike, NBC, Disney, and the NBA were too busy counting their money to notice, Xi has shifted China into a far more aggressive stance towards its neighbors. It used the distractions of the pandemic to complete the Communist takeover of Hong Kong despite treaty agreements that had been in place stating that China would respect Hong Kong’s democratic traditions until a specified date in the future.

That’s what the protests in 2019 were all about — the same protests for which the NBA shamelessly tried to suppress any signs of support — even what that support was shown by Americans on THIS side of the ocean! (See the end of this article for a variety of story links documenting China’s aggression in Hong Kong and the corporate playing willing accessory to the crime.)

Hong Kong has lost their liberties, and China is eyeing Taiwan next. Now that Xi’s Party HAS control of Hong Kong, they are planting a boot firmly on the neck of any dissident, which includes the arrest of anyone who protested the lawless CCP takeover while Hong Kongers were protesting that same lawless takeover.

Predictably, the CCP is destroying a Hong Kong monument to their own bloody history… the now infamous Tiananmen Square Massacre in 1989.

A massive monument to a bloody massacre … is now simply gone

The University of Hong Kong was one of the few places in China where the truth of the massacre dared be spoken so boldly in a public space. It once stood 26′ tall… and now it’s gone. It was quietly packed away in the dead of night. 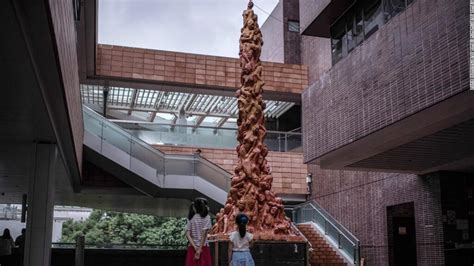 It was one of those monuments, like holocaust memorials, that captures the power of our imagination to awaken our moral conscience. Here’s a closer look. 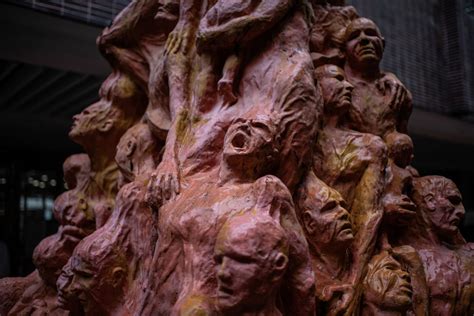 Reports started circulating on social media late Wednesday that security guards had erected plastic sheets and barricades around the statue and that construction work could be heard going on. Videos on social media showed the top being wrapped up and carried away, while the base was removed by crane.

Since its 1997 handover from British colony to semi-autonomous Chinese territory, Hong Kong had been one of the only places in China that openly marked the events of June 4, 1989—when tanks rolled into Beijing’s Tiananmen Square and left what is believed to be hundreds, if not thousands of protesters, dead in a violent crackdown by the Chinese Communist Party.

More than 180,000 people were estimated to have gathered in Hong Kong’s Victoria Park in 2019 to commemorate the 30th anniversary of the crackdown. But following massive anti-government protests that year, Beijing has tightened control over Hong Kong. Caught up in the clampdown: Commemorations of the Tiananmen massacre.

…Jens Galschiøt, the Danish sculptor who made the statue, said in a statement that he was shocked by its removal, and that he’d been trying to contact the university for several weeks to move the sculpture. “It is a disgrace and an abuse and shows that Hong Kong has become a brutal place,” he said. —Time

Those of us old enough to remember the Tiananmen Massacre associate it with this famous photo of ‘Tank Man’.

Most of us saw the close-up photo:

Or possibly this one: 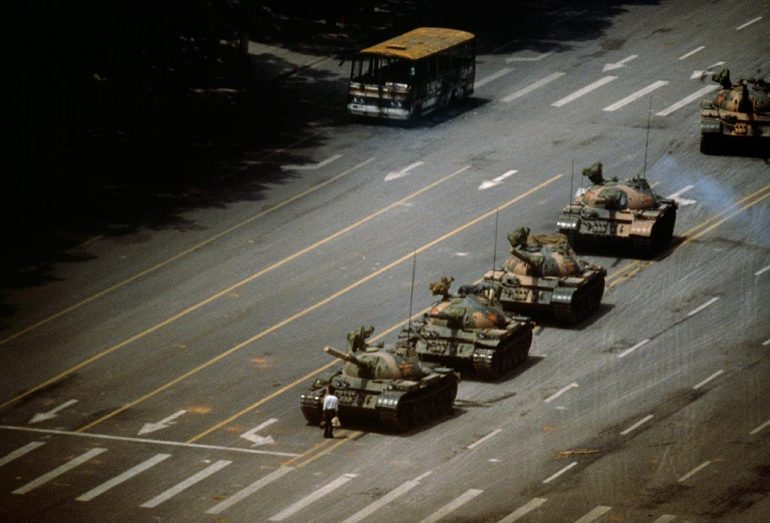 It makes sense that those would be the ones we know because it emphasizes the brave and defiant unarmed student history knows only as ‘Tank Man’ pushing in all his chips as he took a defiant stand against an undeniably superior force.

But zooming in for that photo comes at the cost of some important and helpful context — a context that shows just how brutally China was willing to repress these student protests.

Standing in the path of four tanks is gutsy enough for him to become the stuff of legend. But it was never ‘just’ four tanks he was blocking.

Here’s a wide-angle shot of the same guy standing in front of the lead tank — you can barely see him there in the bottom-left corner. 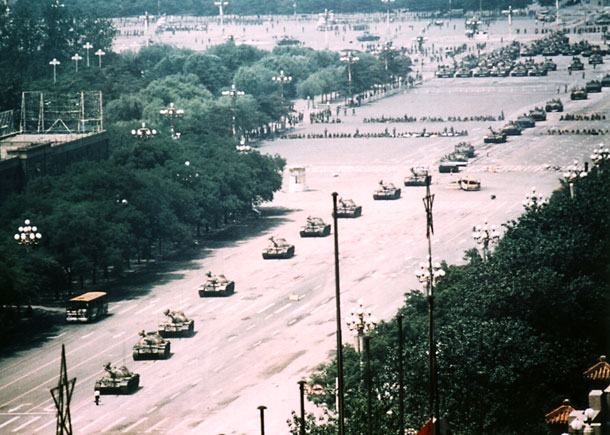 This is direct evidence of a MASSIVE show of military force. And it was no empty threat. BBC wrote an article about the CCP’s response to that peaceful student protest:

The Chinese army crackdown on the 1989 Tiananmen Square protests killed at least 10,000 people, according to newly released UK documents.

The figure was given in a secret diplomatic cable from then British ambassador to China, Sir Alan Donald.

The original source was a friend of a member of China’s State Council, the envoy says.

…The envoy wrote: “Students understood they were given one hour to leave square but after five minutes APCs attacked.

“Students linked arms but were mown down including soldiers. APCs then ran over bodies time and time again to make ‘pie’ and remains collected by bulldozer. Remains incinerated and then hosed down drains.

“Four wounded girl students begged for their lives but were bayoneted.” —BBC

What does this monument removal tell us about the CCP?

When we remove monuments, we have made a decision that what they commemorate or communicate no longer has anything valuable to teach us through either heroic example or cautionary warning.

Xi’s party is not just sweeping the murder of thousands of dissidents under the rug, so to speak, but they are explicitly rejecting the idea that CCP has anything left to learn from the ‘Pillar of Shame’.

Are they signaling that they approve of that jackbooted crushing of dissidents and would be willing to do it again?

If so, our ‘woke’ Fortune 500 boardrooms need to do some serious soul-searching about doing business with a tyrant who could be this century’s analog to Adolph Hitler.

In a world that so desperately needs people like ‘Tank Man’, there are precious few of them left.

Hey Leftists: Will You Make Your Voices Heard For The Oppressed Citizens Of Hong Kong?

WATCH: President Biden Won’t Speak Out Against China’s Genocide And Other Abuses Because Those Are ‘Cultural Differences’