Democrats love nothing better than cherry-picking quotes they can take out of context to destroy their opponents. They’re trying it again here, but in context, it refutes the point they want to make.

You may have come across a very short clip of Trump on stage with O’Reilly where he said he got the booster, and someone in the audience boos him saying that. Naturally, that is the story and framing the left wants to highlight.

Here’s a sample of how legacy news outlets covered that moment… notice the emphasis is on the boos from the crowd. 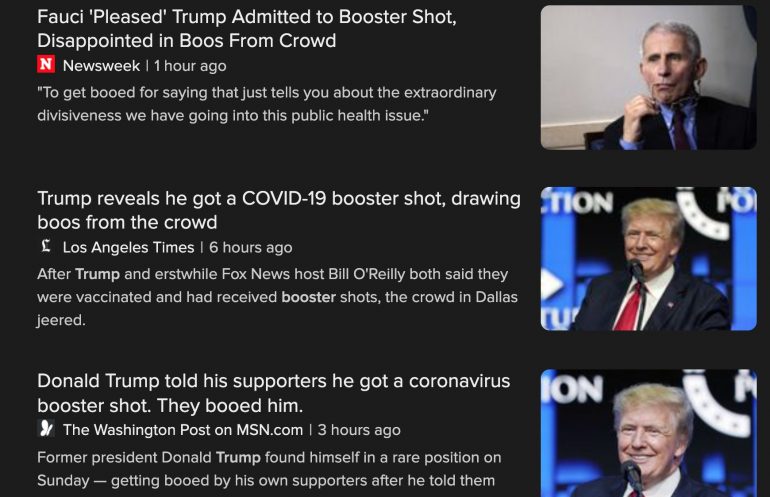 But the way they’re portraying it is not how it actually played out. They include the very brief clip of O’Reilly asking Trump about the booster, and Trump reacting to people in the crowd who booed after he said he had.

They do NOT play what Trump said immediately before that. They don’t dare play that because it refutes several of Biden’s favorite talking points. But we’ve got it here for you.

Let’s start with a transcript of what he said, and then blow away Biden’s favorite talking points after that.

…but look, we did something that was historic. We saved tens of millions of lives worldwide. We, together, all of us. Not me, we.

We got a vaccine done — three vaccines done — and tremendous therapeutics like Regeneron and other things that have saved a lot of lives. We got a vaccine done in less than 9 months that was supposed to take from five to nine years. Because of that vaccine, millions and millions of people — I think this would have been the Spanish Flu of 1917 where up to 100 million people died — this was going to ravage the country far beyond what it is right now.

Don’t let them take it away. Don’t take it away from ourselves. You’re playing right into their hands when you sort of like ‘oh the vaccine’. If you don’t want to take it, you shouldn’t be forced to take it, no mandates. But take credit because we’ve saved tens of millions of lives.

Take credit. Don’t let them take that away from you.

O’Reilly begins talking but doesn’t get a chance to make his point as Trump turns to the audience, asking: do you agree with that?

O’Reilly: Both the President and I are vaxxed, and — did you get the booster?

Then came a small smattering of boos from the crowd that you can compare to the cheers above yourself. That comparison is an important point of context left out by Trump’s critics. (1:17)

Now, you’ve seen the cheers AND the boos, and heard which of them is louder. Are the critics pouncing on the booing characterizing this fairly, or are they pushing their own biases?

We could do this all day, but let’s stick to three central ideas.

1. Biden loves to take credit for a vaccine that was administered to him when he was still a private citizen… and pretends like the COVID recovery plan started from scratch on his first day of office.

2. Anti-mandate and anti-vax are NOT the same thing.

With Biden’s past history of plagarism, it should surprise none of us to learn that he wanted to slap a new label on Trump’s ideas and immediately take credit for them.

In his first prime-time address Thursday night, Biden praised his administration for taking a “war footing” when it comes to combating the virus, assuring that every American will be eligible for a vaccine starting May 1.

…“There were already a million vaccines being administered into people’s arms every single day when Biden was sworn in, 36 million doses had already been distributed,” Hannity said.

He continued, “Joe, you want unity? Why don’t you just thank Donald Trump? You want us all to get along, you say. No Trump, no vaccine, Joe. Stop trying to take credit for something, frankly, you had nothing to do with. Nothing.” —NewYorkPost

Biden the authoritarian vs. Trump the leader

For four years, we heard about the ‘authoritarian tendancies’ of Trump. But here we see yet another example of Trump treating the public as worthy of trust and respect. He relies on persuasion rather than bare-knuckle expressions of brute force to bend American citizens to his will.

Does Trump believe the vaccine is a good thing that helps people? He does.

Does he want mandates for those who don’t want to take it? He does not.

How does he think a leader should reconcile the two? His approach has been to speak highly of the vaccine and why he thinks it’s a good thing. Because that’s how persuasion works.

Parents may be able to compel children to eat their vegetables. But that’s not the approach a real leader should use with citizens whose freedoms he claims to respect.

‘Us’ And ‘Them’ Demonization

If you read Biden’s latest WH release on COVID, you would think that America consits of good guys and bad guys. It’s more than just implied that the good guys are dutiful citizens who unflinchingly obey all of Little Lord Fauci’s edicts. The bad guys in the story are those who do not.

Mr. ‘Soul of the Nation’ who pays lip service to America not being red or blue but purple never misses a chance to sow political division — despite running on a promise to be the guy who does not.

If you listen to Joe, the Democrats, and their dutiful media echo chambers, you might assume that everyone except uneducated Trump voters are lining up to get the vaccine.

As usual, reality is far more complicated and nuanced than that.

For instance, here is one breakdown by demographics that is awkward for Biden. This poll was printed in August. The numbers may have shifted, but it’s still good for shining light on the trends. Either Trump’s Republicans have much more pull with minorities than his racism lie would have us believe, or they’re lying about this being a red/blue issue. 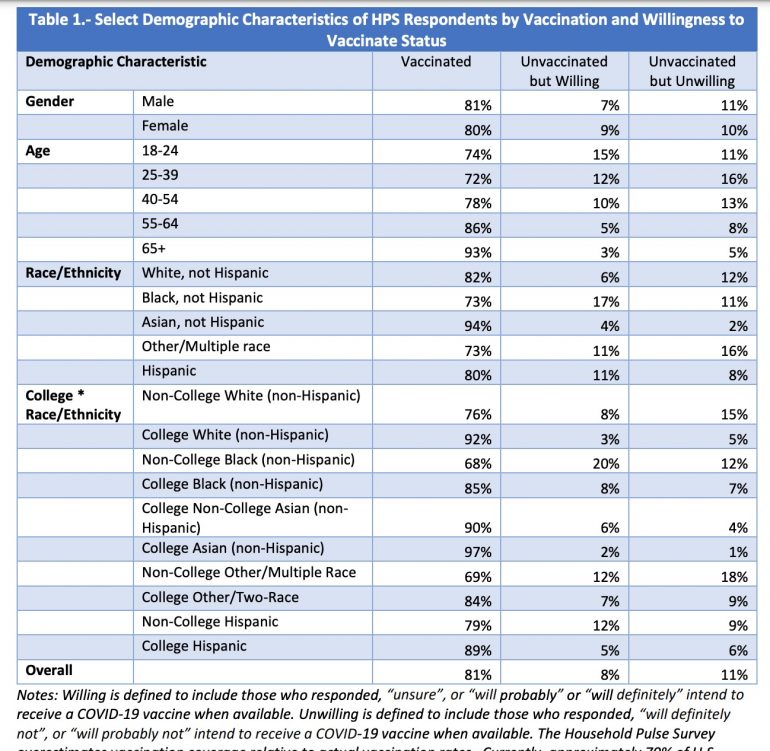 As for the ‘vaccine-hesitant-knuckle-dragging Trump supporter’ trope? It has critical flaw, namely the HIGHLY educated who have been skittish about the vaccine.

Do you remember THIS statistic from the summer?

People with a PhD are the most hesitant when it comes to getting the Covid-19 vaccine, according to a paper by researchers from Carnegie Mellon University and the University of Pittsburgh.

Researchers surveyed just over five million US adults in an online survey, with 10,000 reporting that they were educated to PhD level.

The report showed a surprising U-shaped correlation between willingness to get a Covid vaccine and education level – with the highest hesitancy among those least and most educated.

This O’Reilly clip is making the rounds because it was intended to make Trump voters look like ignorant rubes.

But for anyone paying attention, it shows something else.

It tips the hand for how quickly the left is running out of ideas as they try to close ranks around Biden and throw out every distraction they can to deflect attention from his steady stream of failures.

Did you notice all the talk about his new puppy — right when Manchin blew his signature policy straight to hell? Did you think that was a coincidence?

No, it wasn’t. And neither was this.

Check out the latest painting in Doug’s MAGA series… “FJB“.