CNN’s Anderson Cooper tried to rein in Cohen as he blasted the outgoing mayor of NYC while the new mayor was being sworn in.

You can’t ring in the New Year without some drunken rant on CNN.

WATCH: Don Lemon Gets Very, Very Drunk Ringing In The New Year On Live CNN Broadcast
WATCH: CNN Host Gets WASTED on Air, Makes TOTAL Ass Out Of Himself!

Well, he still did that this year. He had a disturbingly awkward question about black people (language warning) and decided to try some drunk dancing, and then there was whatever the hell this abomination is… 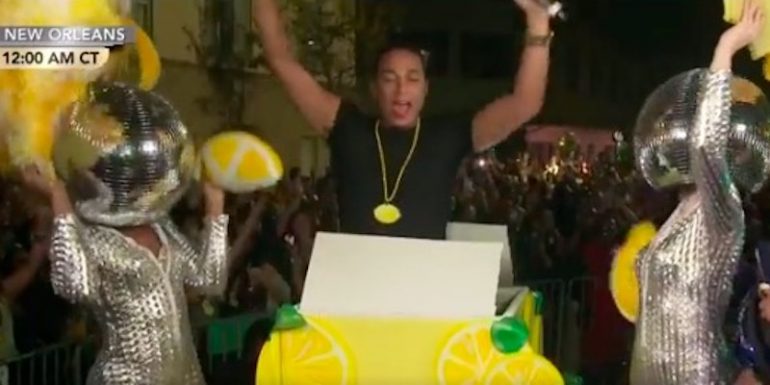 "Here's to a much better 2022." CNN’s @donlemon, @AlisynCamerota and comedian @dulcesloan ring in the new year from New Orleans. #CNNNYE pic.twitter.com/RzMB5ng0UL

Don Lemon and tequila is a recipe for cringe on TV.

But it wasn’t Don Lemon’s inebriated antics that were making major headlines on January 1, 2022 — it was the drunken rant of Andy Cohen, CNN’s replacement for Kathy Griffin as New Year’s Eve co-host.

After the ball dropped and he’d had a few libations, Cohen went off on a rant just minutes after midnight blasting how awful Bill de Blasio was as mayor of New York.

“Let me tell you something,” began the clearly drunk Cohen immediately after downing a shot on-air alongside co-host, Anderson Cooper.

“…doing his ‘victory lap’ dance after four years of the crappiest job as the mayor of New York,” continued Cohen.

But Cohen was undeterred, “The only thing that Democrats and Republicans can agree on is what a horrible mayor he has been. So, Sayonara, sucka!”

Cohen continued by predicting that he would be there next New Year’s Eve, and will be thrilled to not have to look at de Blasio dancing “as the city comes apart.”

The Latin phrase, “in vino veritas” — “in wine, there is truth.”

The drunk dude’s got no effs left to give, so he’s just gonna say it like it is.

Come morning, however, Cohen apparently checked why his name was trending on Twitter.

But this wasn’t the first time that a completely plastered Cohen had ranted about de Blasio on CNN’s New Year’s Eve special… he did that last year, too.

Cohen’s rant stopped as Eric Adams was sworn in as Mayor of NYC.

Let’s hope that Adams can clean up the s-hole that de Blasio has allowed NYC to become.

The thing about Cohen’s rant is that… he’s not wrong.

Even Democrats can see what a disaster Bill de Blasio has been. It only took 4 years to completely erase the legacy of 8 years of Rudy Giuliani that was followed by 12 years of Micheal Bloomberg simply not royally effing things up.

And now, even though random, violent attacks are happening frequently in the Big Apple by the people being let out of detention because of “bail reform”, NYC has now got the Vaccine Gestapo checking the “papers” of a 5-year old in an Applebee’s.

To sum up, Andy Cohen is right on this.

New York is going to be much better off without Bill de Blasio as mayor.