A few days ago in Las Vegas, a man wearing a green t-shirt saying “Can’t Fix Stupid” punched a Michael Jackson tribute artist in the face as he was performing. The performer wasn’t going to let it slide.

What that man in the green shirt didn’t know was that the MJ impersonator isn’t what he seemed — he is also a professional wrestler with the Future Stars of Wrestling named Santana Jackson.

Jackson said that he was surprised by the attack and that it was completely unprovoked. The guy in the green shirt clearly wanted a fight, and Jackson was trying to deescalate the situation trying to avoid a physical confrontation. That clearly wasn’t going to happen. Jackson managed to keep his cool and take control of the situation by quickly dropping the guy to the ground and holding him in a headlock.

The fight after Jackson was initially punched was captured on video and quickly went viral on Twitter.

Ironically, Jackson was dancing to MJ’s “Smooth Criminal” when the man walked up and hit him in the face.

“You’ve been hit by — you’ve been struck by a smooth criminal.”

Despite the online praise, Jackson clarified that he was ‘not trying to hurt this guy just trying to restrain him from swinging at me.’

‘Please know I don’t think fighting is the answer so try to avoid a fight if u can. Stay safe,’ the singer added.

Jackson is a member of the MJ Live Show, a Las Vegas-based tribute concert to the late pop star. Per the organization’s website, he is one of the globe’s ‘top Michael Jackson tribute artists’ and is ‘committed to bringing the magic of Michael Jackson to audiences around the world.’
Source: Daily Mail

TMZ interviewed Santana Jackson after the incident and he gave more details about what exactly happened a few days ago.

What’s amazing is that Jackson carried on with his act after the incident and performed until about 3 am.

In case you’re curious what Santana Jackson looks like in the ring, here are some of his top moves…

Clearly, Jackson has a heck of a sense of humor.

He even posted a couple of memes about becoming a viral sensation on Instagram, including one about one of his signature wrestling moves — the Moonwalk DDT. 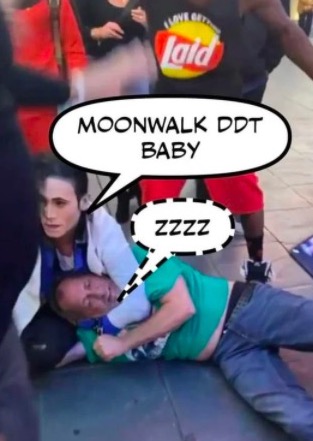 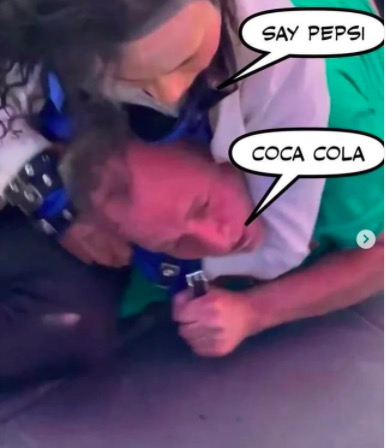 Santana Jackson seems to have some things sorted out, but that guy in the green shirt needs to cool his hells a bit.

After picking a fight with an impersonator/wrestler and a cop, he’s gonna probably have some time to rethink some of his life choices.