What we are seeing now is an exercise of raw political power to hurt anyone who runs afoul of their agenda.

And society’s self-appointed hall-monitors of PC morality won’t stop until they have crushed every dissenting voice… or that someone strips them of their power to destroy others.

Recently emboldened, they’ve turned their sights on taking down even bigger fish. This time, it’s Joe Rogan. They THOUGHT they had him dead to rights.

He’s a prime target for their agenda since he has been a very high-profile nonconformist in his COVID views, giving an opportunity to experts, and credibility to inexpensive, out-of-patent treatments to the ‘Rona. And that is definitely NOT acceptable to our self-appointed overlords.

He gave a platform to a highly credentialed medical doctor they had already gone through the trouble of canceling, and they were outraged. They labeled Rogan as misinformation, ginned up an open letter written by 270 scientific ‘experts’ (just don’t look too closely at their credentials).

Then a washed-up rocker threatened to pull his music. Others clued into the pressure campaign pressuring Spotify, and followed suit.

Joe Rogan made a serious blunder. He treated his accusers as if they were acting in good faith. They were not. He made a good-faith statement about the controversy.

In a nearly 10-minute long video posted on Instagram, Rogan said he is open to changes to the show such as booking more mainstream experts after having controversial ones and doing more research on certain topics. Rogan praised Spotify for its latest decision to add content advisories to any material mentioning Covid-19, and direct its users to public health sites for more information. He also thanked the platform for its support. — CNBC

A public statement about him being wrong was the thin edge of the wedge they needed to begin a purge. And then they started bombing through his archives for dirt they could hit him with.

He’s a rough-speaking guy who doesn’t shy away from controversial issues. Needless to say, they found some dirt. They created a montage of naughty things he said (including The-Word-That-Must-Not-Be-Said-Unless-You-Are-A-Rapper-Or-A-Black-Comedian-Or-Possibly-Madonna) and started pulling episodes.

Spotify has been removing Joe Rogan Experience (JRE) episodes since Friday, and as of this writing, the service has pulled down a total of 113. As first noticed by Gizmodo, around 70 episodes have recently disappeared from the platform. Based on the website dedicated to monitoring which of the show’s episodes aren’t available on the service, those were removed on February 4th, in addition to the 40 deleted some time ago. However, the newly deleted episodes don’t seem to be connected with the COVID-19 controversy surrounding the show and the service right now. –Engadget

Anyone who knows him would have difficulty describing him as a bigot with a straight ace. But we live in a post-truth generation, so he’s now on defense and apologizing for past remarks.

The wokesters are intent on canceling him as a lesson to the rest of us to toe the line.

Some shows have already been pulled from Joe’s archives. The reasons for which they’ve been canceled are not always what they’d seem.

Spotify’s crotch is in the vice now and they know it. They’ve already begun the preemptive surrender.

It was promptly mocked.

So When Does The Winning Start?

The career assassins on the left have been organizing to take the biggest podcaster on the planet off of traditional platforms, even though he is the marketer’s dream content creator.

It’s proof of concept of their supposedly boundless power.

And then Rumble came along.

If the JRE is suddenly such podcast non grata on the Spotify platform that they are apologizing to their own staff, why should Rogan stick around for the ritual abuse when there’s a better option? 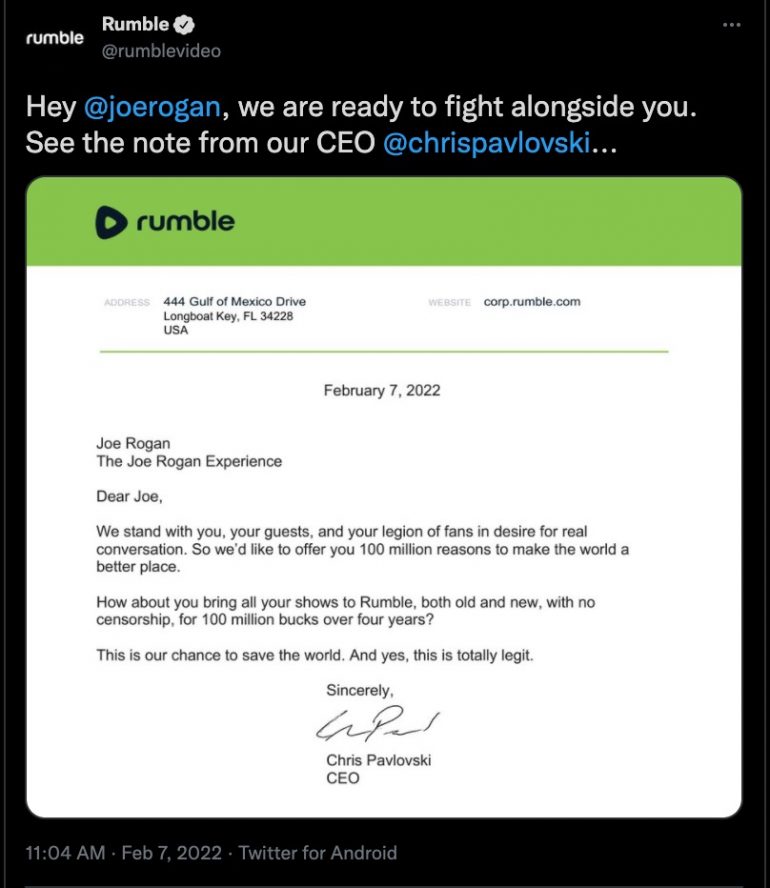 We stand with you, your guests, and your legion of fans in desire for real conversation. So we’d like to offer you 100 million reasons to make the world a better place.

How about you bring all your shows to Rumble, both old and new, with no censorship, for 100 million bucks over four years?

This is our chance to save the world. And yes, this is totally legit.

Will he accept it?

If he does, that would be an absolute coup for the un-censorship economy. And it will be ‘proof of concept’ that the Big Tech tyrants of yesterday love censorship, but that we still have somewhere on the internet we can meet and all be free.

Even if he doesn’t, it’s a clear signal to the left that their cancel-culture ultimatums no longer carry the weight they used to.