It isn’t enough that they enjoy journalistic freedoms, they have to preserve the monopoly on the narrative by discrediting any rivals.

There was a time when we were led to believe that Reuters was journalism as the concept was explained to us in grade school. They were all about answering those five W’s (and How). But maybe straight news doesn’t pay the bills as much as being a politicized shill for the regime-approved narratives.

Anyone who refuses to march lockstep with the univocal voice of The Media™ needs to be slated for destruction. Even if the narrative changes to keep up with inconvenient facts that can no longer be suppressed (like objections to the effectiveness of various kinds of masks), no forgiveness is offered to those who challenged the narrative before it was acceptable to do so.

A couple of weeks back, a letter objecting to Joe Rogan made the news. If you read all the narrative-affirming sites, you would be told that this letter is backed by the signatures of 270 scientists. (We’ll reserve criticism of the ‘appeal to authority fallacy’ for another day.)

They were upset that Joe Rogan had the audacity to speak to Dr. Robert Malone, who was among the researchers who developed mRNA vaccine technology, but is controversial because he does not toe the line on various official COVID narratives.

Those 270 scientists spoke with one voice about the dangers of pushing ‘anti-vax misinformation’, and demanded that Spotify ‘do something.’

That letter, in turn, triggered some washed-up rock-and-rollers to pull their library from Spotify, in hopes that this would pressure other leftist artists to follow suit in pressuring Spotify to make Joe Rogan bend the knee. It was a big gambit, but if they can make a big fish like Joe Rogan who has ‘eff-you’ money to knuckle under, they have the tools to make most any of us comply.

Spotify has already begun responding to that pressure in identifying any podcasts which address the topic of Covid.

Not the type to shrink away from difficulty, Joe Rogan took the topic head-on, and made it clear where he stands. WATCH: Joe Rogan Responds To Spotify Controversy

That wasn’t enough, and the woman (a doctor) who started this pressure campaign has insisted that Joe Rogan didn’t give her the Jon-Cena level emasculating groveling apology she demanded. She wants Spotify to go further.

And the supposedly impartial Reuters is more than happy to help her pressure campaign along by promoting the following tweet.

U.S. podcaster Joe Rogan's apology was 'a non-apology,' according to Dr. Katrine Wallace, an epidemiologist who co-authored a letter signed by 270 scientists and health providers calling for Spotify to implement a COVID-19 misinformation policy pic.twitter.com/kgI5fxLa9V

Having seen it shortly after it was posted, it was hard for yours truly to resist trolling them. 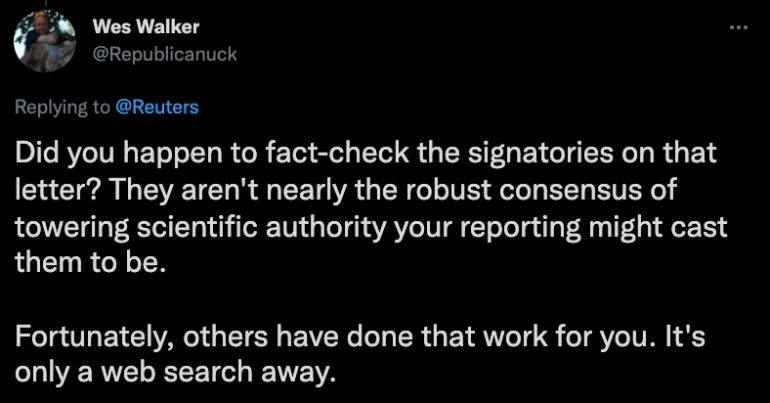 Let’s recap the woman’s agenda before explaining why Reuters was a malicious actor in this reporting.

‘We are not trying to Cancel Joe Rogan, we’re not trying to have him stop making podcasts, it is a private company Spotify so they can do what they want. I’m just — my job as an epidemiologist is to find risk factors for disease, and misinformation about the pandemic, about COVID-19, and about the vaccine has been a risk factor for more disease and death throughout this entire pandemic. And when it’s spreading on a big platform like that unchecked, it does create a sense of false balance, people don’t know what to believe, so they’ll believe the misinformation instead of the public health guidances.

So the content advisory they’re putting on ALL Covid-19 information, not just problematic Covid-19 misinformation it’s really, kind of inaction disguised to look like action, it’s more spectacle than substance, so if anything that talks about Covid-19 can have an advisory on it whether it’s from WHO, or from Joe Rogan, it really doesn’t accomplish anything.

Is that your final answer? Are you sure that the World Health Organization is your go-to authority on watertight unbiased authority?

And what about when the ‘authoritative’ experts disagree?

WATCH: Fauci Says Children 2 And Up Should Wear Masks — But That’s Not What The WHO Recommends…

… or even simple human error…?

MUST WATCH: ‘We Have Made Mistakes’ Says Immunology Prof Who Advised Israel’s Vaccine Policy

How was Reuters Lying?

Simple. They knew — or should have known — that lending their voice to the story suggests that all the component parts of the story they are telling are true.

Since the woman in this video is featured not because of any unusual credentials of her own — she is speaking ill of doctors whose resume leaves hers in the dust — but because of the letter that elevated her to some prominence.

It’s an old tactic that we have seen to lend credibility to dubious claims… including the infamous discrediting Biden’s (very real and damning) Laptop as having the marks of ‘Russian disinformation’, which may have swayed both a Presidential debate and an election when Joe Biden hid behind the presumed authority of those ‘dozens of’ intelligence experts.

Similar campaigns to smear or push politicians and political discourse in various ways have popped up again and again.

If Reuters is going to push this story, especially this woman noted for her role as author of this supposedly important and influential letter, isn’t it important to look into who these co-signers really are? Fortunately for Reuters, Daily Mail has some actual journalists looking into these details.

The majority of the 270 signatories to an open letter to Spotify accusing Joe Rogan of pushing ‘anti-vax misinformation’ on his podcast – with one branding him a ‘menace to public health’ – are not medical doctors.

Hundreds of doctors and scientists signed the letter, published January 10, that called on the streaming giant to adopt a misinformation policy after the comedian hosted the controversial Dr Robert Malone last month.

Only 87 of the 270 signatories are medical doctors – the rest are from assorted professions including engineers, teachers, psychologists. Malone himself has an MD from Northwestern University.

… Some of the other members of the medical academic field featured include physicians’ assistants, a biochemist, nearly 100 Ph.Ds and Ph.D candidates, over a dozen nurses, medical students and public health advisors. —DailyMail

Reuters needs to take a hard look in the mirror before they start flinging around words like ‘misinformation’. Especially when they are behaving in a way that is entirely indistinguishable from regime-controlled puppet media.