Every medical intervention has a cost and they must be carefully weighed. This administration is deciding to play politics instead.

The monologue by Psaki came after Republican Gov. Kay Ivey signed a bill into law that made Alabama the third state to ban children from hormone therapy and puberty blockers.

The White House this week slammed the Alabama law, with press secretary Jen Psaki saying during a press conference that hormone therapy for minors is “lifesaving health care.” Steve Marshall, the Republican attorney general of Alabama, said his state is prepared to stand up to liberal groups’ legal challenges and White House opposition, which he called “predictable and of very little interest to Alabamians.”

“It is undoubtedly difficult for the Biden administration, including the Department of Justice, to accept that Alabama is a sovereign state,” Marshall told the Washington Free Beacon. “We’re prepared to act like it.”

Alabama is just the latest state to face challenges over its hormone-treatment ban for children. Arkansas last year became the first state to ban the practice, but a federal court blocked the law in response to a legal challenge from the ACLU. The group, along with other liberal organizations such as the Southern Poverty Law Center and Human Rights Campaign, has vowed to challenge a similar law passed this year in Arizona. When Texas governor Greg Abbott (R.) in February ordered state social services to investigate parents whose children receive hormone treatment, a Texas appeals court blocked the order following another ACLU legal challenge.

The legal efforts come as the Biden administration last month endorsed “gender-affirming care,” including hormone therapy and sex-reassignment procedures, for transgender children, calling the treatments “crucial” for their well-being. In the statements commemorating “Transgender Day of Visibility,” the White House and Department of Health and Human Services cited a study from an LGBT group funded by a hormone-drug manufacturer, the Free Beacon reported. That same day, the Justice Department wrote the letter to state attorneys general warning that laws preventing children from “seeking gender-affirming care” amount to unlawful discrimination.
Source: The Washington Free Beacon

On the last day of Women’s History Month, President Biden spoke about the administration’s support for transgender Americans.

In his brief address, he told parents to “affirm” their child’s identity to keep them “safe and healthy.”

This is all so very dangerous. Before so-called “gender-affirming care” was adopted, the vast majority of children who suffered from gender dysphoria had those feelings disappear once they hit puberty.

There isn’t much data on the effects of transgender treatment in children, though there are known effects on bone density as well as an increased risk of breast cancer for males that take female hormones — and those are just the known physical effects, it’s unclear what the mental effects are.

One of the main studies widely cited in the media and by Biden’s HHS that pushes “affirmative care” for children was funded in part by a drug company that makes puberty blockers. That’s a bit of a conflict of interest that should be reported, no?

Meanwhile, studies conducted with adults suffering from gender dysphoria have shown that there are alarmingly high rates of suicide post-transition. A 30-year Swedish study found that people who transitioned were 20 times more likely to commit suicide after 10 years.

But instead of recommending treatment like counseling which they falsely label “conversion therapy,” activists and lobbyists insist on pushing for affirmative care without regard for the best outcomes for patients.

The gender-affirmation advocates in the United States are out-of-step with treatment recommendations in other places in the world.

Some European countries that had embraced the affirmative care model in the past are now moving away from it due to new research as well as the rapid increase in cases of gender dysphoria occurring in older children, particularly among teen girls.

In 2020, Finland has severely restricted hormone therapy in minors.

Sweden’s National Board of Health updated its recommendations regarding hormone treatment for children suffering from gender dysphoria in February 2022. They now recommend a more cautious approach and only permit hormone use for minors in clinical trials.

The National Board of Health and Welfare is today publishing new recommendations regarding hormone treatment of young people under the age of 18 with gender dysphoria. Uncertain science and new knowledge mean that the National Board of Health and Welfare now recommends restraint when it comes to hormone treatment. At the same time, it is important that children and young people suffering from gender dysphoria are taken seriously, treated well and offered adequate care measures.

Gender dysphoria means that you have a mental illness or a reduced ability to function in everyday life, which is caused by the gender identity not matching the registered gender. The National Board of Health and Welfare is updating the knowledge support for gender dysphoria care for young people, and today new recommendations are presented regarding anti-puberty treatment and gender-confirming hormone treatment for young people.

The National Board of Health and Welfare has previously presented statistics that show that the group of young people seeking care for gender dysphoria has increased sharply. Between 2008 and 2018, the number of new cases of diagnosed gender dysphoria multiplied. The increase was particularly large among those aged 13 to 17 and with a registered gender at birth.
Source: Sweden’s National Board of Health (using Google Translate)

The Swedish recommendation also states that “it is not yet possible to draw any definite conclusions about the effect and safety of the treatments based on scientific evidence” and that at present, “the risks outweigh the benefits.”

While the activists in the U.S. insist that children are not undergoing surgery, studies posted on the National Institute of Health’s website show that is not true at all.

A study from 2017 reported on surgeons’ experiences and attitudes toward performing vaginoplasty on males under the age of 18.

A 2018 study was comparing the surgical and nonsurgical treatment of “transmasculine minors and young adults” — some of these teen girls had medically-unnecessary mastectomies to “treat” their gender dysphoria. 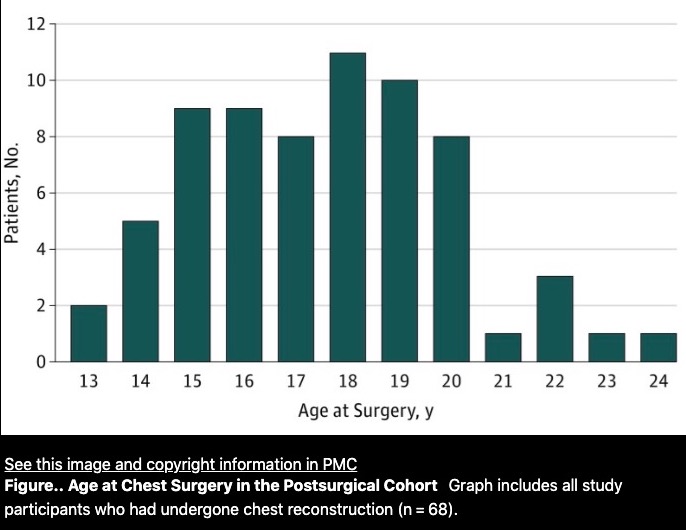 There are also so many cases of de-transitioners that regret their decision to have life-altering hormone treatment and/or surgery that we should be pumping the brakes here rather than following the Biden-Harris administration’s reckless decision to push full-steam ahead and punish states that want to be more cautious.

Children’s lives are at stake here.

Someone should remind the Biden-Harris administration while they play politics by using people who are suffering from gender dysphoria in order to attack Republicans.