It wasn’t AOC’s usual shrieking about “taxing the rich” to “pay their fair share” — this was something very different.

The thing about Twitter is that there are interactions that you never expect like this one between billionaire Elon Musk and Rep. Alexandria Ocasio-Cortez.

On Friday, the “Democratic-Socialist” Congresswoman from New York’s 14th District tweeted that she wasn’t a fan of billionaires in control of large communication platforms.

“Tired of having to collectively stress about what explosion of hate crimes is happening bc some billionaire with an ego problem unilaterally controls a massive communication platform and skews it because Tucker Carlson or Peter Thiel took him to dinner and made him feel special,” she wrote.

The founder of Tesla and SpaceX replied, “Stop hitting on me, I’m really shy” with a blushing emoji.

The response was a clear clap-back at AOC who said that Republicans that criticize her just want to date her.

AOC made the ridiculous claim after she was called out by right-wingers for her hypocrisy on lockdowns when she was spotted vacationing in the Free State of Florida last winter.

If Republicans are mad they can’t date me they can just say that instead of projecting their sexual frustrations onto my boyfriend’s feet.

Yes, I’m sure that’s the case because she’s a stunning beauty with a rapier wit. 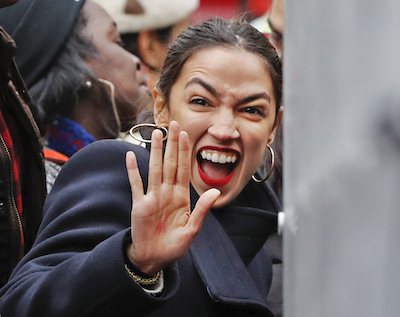 It is possible that she admires him from afar. After all, she prioritized buying a Tesla over helping her “abuela” in Puerto Rico after Hurricane Maria and we all know that she has an obsession with “the rich.”

She’s been admiring you from afar for quite some time. pic.twitter.com/nv3uKcCKDt

AOC replied to the tweet and then quickly deleted it. 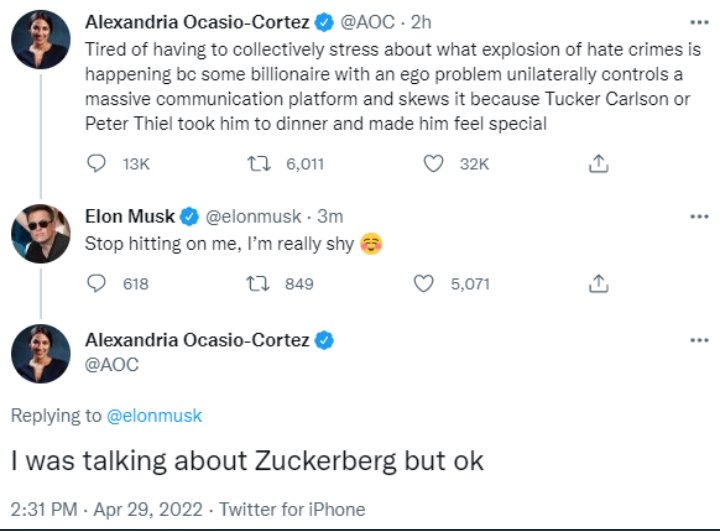 She was talking about Zuckerberg? Really?

It’s kind of a coincidence that she mentioned Peter Theil along with an unnamed billionaire controlling a “mass communication platform” the same week that Libs are melting down over Elon Musk purchasing Twitter.

Musk got the better of her and she knows it.

It’s a good thing that Elon Musk bought Twitter because lately, he’s just been owning it.