The MAGA crowd embraced it when Hillary called them the “Deplorables” — does Joe think that badass nicknames are insulting?

Recently, Clueless Joe has tried a new strategy in his commitment to “unity” — call the 75 million people that supported Donald Trump “Ultra-MAGA” and Trump himself the “Great MAGA King”.

Like most other moves that he makes, Biden clearly didn’t think this through.

First of all, calling Patriots “Ultra-MAGA” is just amazing, and he’s saying that Donald J. Trump was “great” as the “king” of “Make America Great Again.”

That’s not the insult that he seems to think it is.

Biden first began using the term “Ultra-MAGA” last week as he was patting himself on the back for reducing the deficit as out-of-control spending continues.

President Biden: “I reduced the federal deficit. All the talk about the deficit from my Republican friends, I love it. I’ve reduced it $350 billion in my first year in office. […] I don’t want to hear Republicans talk about deficits and their ultra-MAGA agenda.” pic.twitter.com/rhbBkja5E1

That was the same time that he called “MAGA” the “most extreme political organization that has existed in American history.”

He really seems to believe it, too.

Not the violent black nationalist groups, Antifa, terrorist organizations in the 60s that were bombing federal buildings, or the KKK — it’s the people that want a secure border, low taxes, non-activist judges, and not to push transgenderism on kids in schools that are the real problem.

He used “Ultra-MAGA” again on Monday as though it’s a pejorative.

Biden goes on another unhinged rant against the “Ultra MAGA” crowd… pic.twitter.com/TgWtW1HxMm

Outgoing White House Press Secretary Jen “Circle Back” Psaki said that the President came up with the “ultra” prefix all by himself to add a “little extra pop” to the denigration of his political opponents.

The press secretary listed abortion access; a proposal from Sen. Rick Scott (R-FL) that would make all Americans pay an income tax and would sunset Social Security, Medicare, and Medicaid; and Florida Gov. Ron DeSantis’s row with Disney as examples.

“It’s also the obsession with culture wars and wars against Mickey Mouse and banning books. The president thinks that’s extreme,” said Psaki. “That’s not what the American people care about or what they want, and so, to [Biden], adding a little ‘ultra’ to it gives it a little extra pop.”
Source: Washington Examiner

His handlers must be so proud that he’s thinking of things other than ice cream, creepily sniffing the heads of women and children, and where his 10%-50% cut from Hunter’s business dealings are.

Then, on Wednesday, Biden called former President Trump “the Great MAGA King” in an address to the International Brotherhood of Electrical Workers convention in Chicago.

Biden refers to Trump as “the great MAGA king.” pic.twitter.com/tkONV6dbxf

At another point, he started yelling something incoherent about the “MAGA crowd” wanting to forget that people were lining up for food when the government shut down the country because of a virus.

Joe Biden begins yelling and claims that the “MAGA crowd” wants to forget that there were cars waiting in line for food during the pandemic. pic.twitter.com/iII4THR1oG

What the heck is he talking about?

Most of the “MAGA crowd” think it was a bad idea to shut down.

Psaki said that this namecalling isn’t inconsistent with Biden’s promise of “unity” when he first took office.

She smiles smugly as though it’s totally fine to label millions of people as extremists because they voted for the other guy and claim to want unity.

That’s some Democrat logic, right there.

I mean, could we sound anymore AWESOME?

Or perhaps he’s just recognizing what was…

It appears that even DJT himself posted a meme about it on Truth Social. 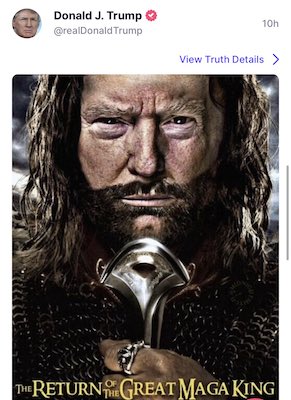 As Daily Wire’s Ben Shapiro pointed out, Joe Biden is about as good at branding as he is at running the country.

Joe Biden is even worse as at branding than he is at presidenting. Here are some of Biden’s attempts at branding:
Build Back Better
Putin’s Price Hike
ULTRA MAGA
Great MAGA King
The only surprise is that Joe Biden is not responsible for New Coke.

Is there anything that this guy is good at besides effing up the country?