We need answers, but it seems that the answers that are being given are only raising more questions.

Tucker Carlson’s monologue on Thursday highlighted some of the inconsistencies in what has been reported about the law enforcement response to the horrific tragedy at Robb Elementary School in Ulveda, Texas that has left 19 children and 2 teachers dead.

So much of what was initially reported has turned out to not be true. This is somewhat expected in the wake of a tragic event when details and timelines are still being determined, but this is far beyond the normal confusion.

There appear to have been complete fabrications and even some gaslighting when witnesses are calling it out.

The neighbor who was a witness to events was right — there was no school resource officer at the school and the police were keeping parents out of the school and waited a full hour before going into the school.

As one anonymous Twitter user pointed out, it would appear that law enforcement didn’t follow the protocols of the active shooter training by not immediately going in and stopping the killing. 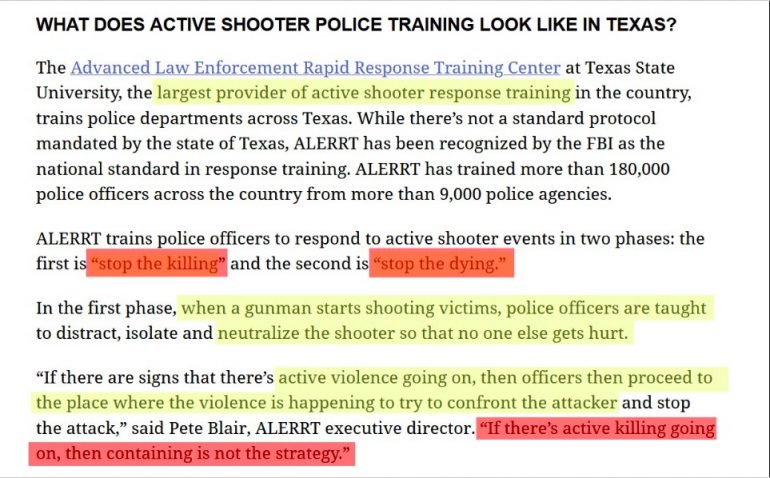 Independent Journalist Saagar Enjeti posted a helluva thread on Twitter on Thursday sounding the alarm on what increasingly appears to be a massive failure on the part of Texas law enforcement.

It is increasingly clear this is a scandal of epic proportions. @GregAbbott_TX and @KenPaxtonTX must launch an immediate and actual investigation into Texas DPS, Uvalde PD, and all other responding LE agencies. The lies are mounting and the situation is becoming very clear https://t.co/dW6YcHHihc

“There was some police officers, families trying to get their children out of the school because it was an active shooter situation” https://t.co/T9ghkaRLbt

One of the tweets in the thread included a video of Texas police holding parents back from the school as the shooter was still inside murdering their children.

This video make so much more sense now. The cops literally stopped parents from helping their kids. pic.twitter.com/zhQfUjlpjd https://t.co/DqgZUH3uCC

A second disturbing video that Enjeti shared in his thread was an interview on the local news where a Texas DPS Lieutenant seems to say that local police had pulled their own children out of the school while preventing parents from doing the same.

“1st acknowledge the brave men and women of law enforcement,” not condolences to the family first. Also, the cops engaged the shooter before he entered the school, and they are still alive? Finally, cops went in and pulled their own kids out during the active shooter threat. WTF? pic.twitter.com/4okN01jGjq

It’s unclear if this actually happened, or if it did, if the officers evacuated other students as well as their own children.

Many on social media have taken this to mean that they went in, took out their kids, and left other children there while an active shooter was in the school.

If that’s what happened — there are no words for how awful that is. Talk about dereliction of duty!

In a press conference on Friday, Texas DPS Director Steve McCraw had dismissed those claims.

A visibly shaken McCraw was addressing the timeline of events that indicates that there was indeed a huge gap of time — roughly an hour — before law enforcement went into the classroom.

An exterior door had been propped open by a teacher at 11:33 am, the gunman entered about a minute later and began his rampage. It wasn’t until 12:50 pm that 12:50 p.m. when U.S. Border Patrol tactical teams entered the classroom and killed the suspect. As police waited for backup, more than 100 rounds were fired.

McCraw said that the decision to wait for backup instead of immediately breaching the classroom was a mistake. He said that the officer in charge believed that the shooter had barricaded himself in a classroom and no one was at risk. That clearly wasn’t the case.

Texas Department of Public Safety Director Steve McCraw says it was the wrong decision by police officers to wait and not immediately breach a classroom door inside the Uvalde, Texas elementary school where a gunman killed 19 children and two teachers Tuesday and injured more than a dozen others.

McCraw said the scene commander, who he identified as the chief of the Uvalde Consolidated School District Police Department, believed the incident had transitioned from an active shooter to a barricaded person and that no other children were at risk.

Based on 911 calls and other evidence obtained in the ongoing investigation, McCraw said that decision, in hindsight, was not the right one.

“Obviously, based on the information we have, there were children in that classroom that were still at risk,” McCraw said. “From the benefit of hindsight where I’m sitting now, of course, it was not the right decision. It was the wrong decision. Period.”
Source: NBC 5 DFW

While right-wingers (in general) appreciate law enforcement officers who provide a vital yet dangerous service to their community, we also need to trust them.

This confusion, false statements to the media, and the clearly horrible decisions made when lives were on the line have eroded much of that trust in this situation.