The idea of a ‘sex strike’ is nothing new. It is at least as old as Socrates’ contemporary playwright, Aristophanes.

The way it’s supposed to work is simple: in order to make the men listen to the demands of the women that are thought to have been unjustly ignored, the women will leverage sex as a weapon. In other words, ‘no nookie for you until I get what I wanted’.

When the decision was first leaked, Joy Behar called for a sex strike to force guys to somehow save Roe V Wade. As though that decision was in the hands of anyone other than 9 justices who had made up their mind already.

Joy was the brunt of all kinds of jokes because, well, she’s Joy Behar, and NOBODY wanted that image in their head. But the idea itself is getting traction with the zealots because they think it’s a winning issue.

‘Women of America: Take the pledge. Because SCOTUS overturned Roe v. Wade, we cannot take the risk of an unintended pregnancy, therefore, we will not have sex with any man — including our husbands — unless we are trying to become pregnant,’ one Twitter user wrote.

‘I live in New York and I am DOUBLE FURIOUS with the Supreme Court. I want to find people who are coordinating a mass sex strike. That is our power,’ another woman raged. ‘Women have the power here. No more sex until abortion rights are federal law.’

There were also calls for ‘sex strike’ across the country as terms including #SexStrike and #abstinence began trending online.

Another supporter wrote on Twitter: ‘Womxn! Calling for a national #sexstrike ✊ No sex with men until women’s rights are codified by law. #Allmen #Underhiseye.’

‘Perhaps a #sexstrike (also known as #abstinence) would help the men folk to be all in on this #womensrights issue,’ another Twitter wrote.

Of course, if they were a little more selective about who they let in their beds in the first place, abortion wouldn’t be nearly the hot-button issue it is today.

Under his eye, buy the way, is a reference to the Handmaid’s Tale. To read the left’s social media references this is the only book other than Harry Potter they’ve actually read. (Unless of course, they skipped the books and just watched them on Netflix.)

You tell us you won’t have sex for as long as the Dobbs ruling stands, and every state has the right to govern itself with laws acceptable to their red or blue preferences?

As the meme says… 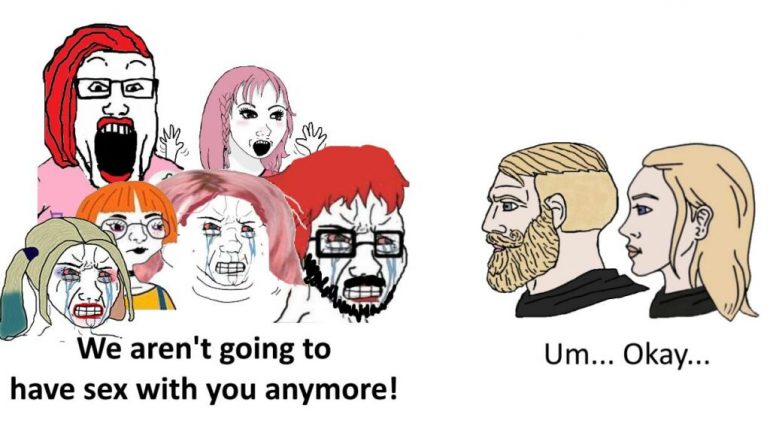 Yeah, you’ve really got us there. You should get started on that campaign right away and let us know how it’s working out for you. The rest of us have lives to live.