We’re at the point where even Democrats have started openly asking about Biden’s mental fitness. And moments like this only make it worse.

When a Press Secretary goes into a presser with a binder full of notes, nobody minds much unless they hem and haw for 20 seconds trying to find out how to spin the question.

When a President speaks to the press with notes and talking points handy, he is mocked mercilessly by the media — if his name happens to be Trump. We know because we’ve seen it happen. But when Joe Biden is repeatedly caught fumbling through his cue cards looking for his answer, they bend over backward to downplay that.

We’ve given Joe a hard time on his cue card in the past, especially when they told him which journalists he was supposed to call upon and in which order.

But since taking office, he’s required more and more rescuing in his public appearances. He’s often looked confused and uncertain about where he was to go, and what he was to do next. Much was made of that time he either did — or did not — attempt to shake hands with empty air.

One of the low points was a staffer dressed in an Easter Bunny suit who jumped in to rescue him from going off-script. That was still slightly better than Joe’s outrage at all the times his cabinet members or other functionaries had to walk back statements he made that were the diplomatic equivalent of juggling grenades on various foreign policy fronts.

“What the president REALLY meant was…”

Spin and damage control is part of the job of White House staffers. It’s a safe bet that anyone doing that same job in Trump’s day finished the job with a lot more grey hair than when they started.

We can all agree that Joe Biden has ‘lost a step’ to say the least. And most of us can acknowledge that he was eminently mediocre even in his prime.

But try to imagine how the Negative Press would have reported Joe Biden’s latest public stumble if it were about Trump.

Joe is holding cue cards that look like they were written as basic instructions for a third-grader.

Honestly, Joe, if you’re THAT helpless, at least be discreet about it. 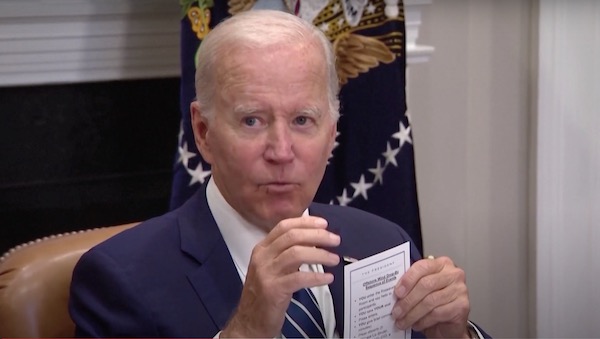 Joe Biden isn't senile, guys. His handlers just have to give him step by step directions for every single thing that he does.

Here is a partial list of the bullet points.

-YOU enter the Roosevelt Room and say hello to participants
-YOU take YOUR seat
-Press enters
-YOU give brief comments (? Minutes)
-Press departs
-YOU ask Liz Shuler AFL-CIO President a question"

Then more bulletpoints I can’t quite see.

A better angle which includes the rest of the card. 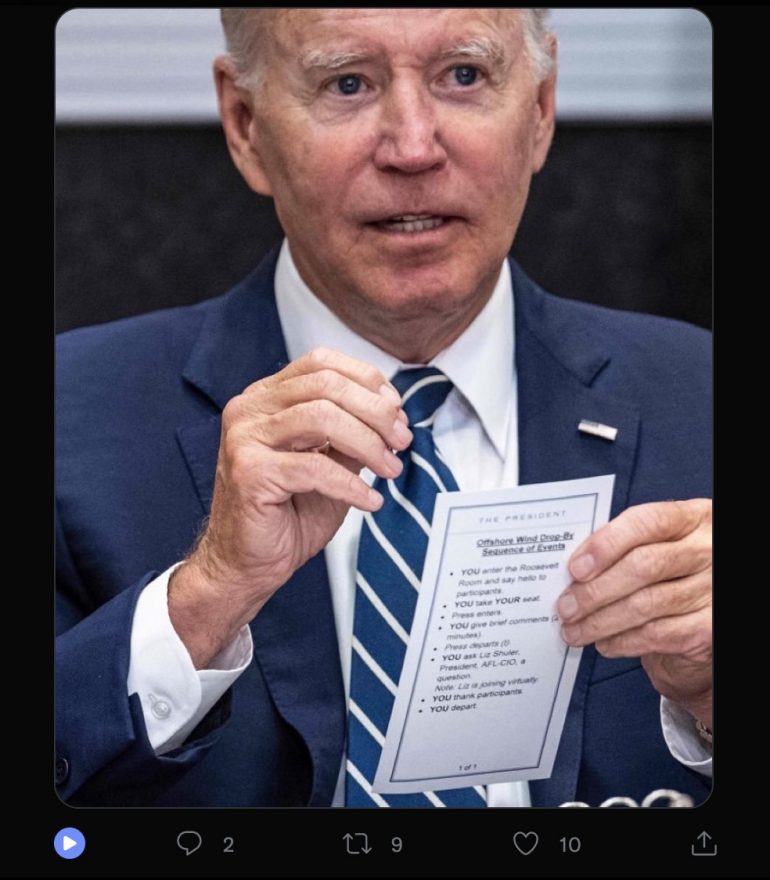 The bullet points not already mentioned above are:

– Note: Liz is joining virtually
– YOU thank participants
– YOU depart

Here’s video where he is answering the press questions about the SCOTUS ruling on New York concealed carry laws and holds his little cue cards up where the cameras can show them to the world.