The gun-grabbers still can’t figure out why the Second Amendment is important. But this guy knows. He’s lived it.

Burglars kicked in the door of Joe Howard Teague’s LA home just after midnight, and the retired plumber was ready for them.

He may have been 93 years old, but with a firearm in his hands, he was more than a match for them.

He held them at gunpoint and put them under citizen’s arrest. One of the intruders tried to attack him with a fishing pole.

Teague said the suspects, who had kicked his door open, started throwing objects at him as he pointed his gun in their direction.

“It was just like somebody comes to a gunfight with a pocketknife, you know,” Teague said.

When authorities arrived on the scene, they found one suspect — 33-year-old Joseph Ortega — suffering from a gunshot wound inside the home.

Witnesses said they saw his alleged accomplices flee the home on foot before authorities arrived.

“Investigators have established that several individuals, including Ortega, were inside Teague’s property when a shooting occurred,” the sheriff’s office said. — NYPost

Imagine the embarrassment of being the moron who had the air let out of you by this harmless-looking guy: 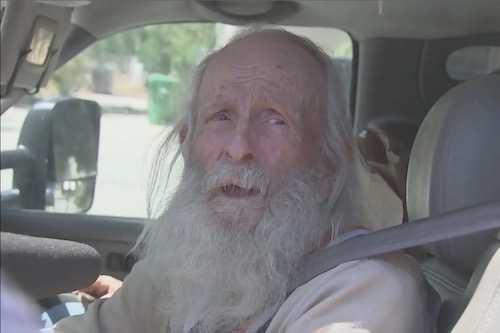 He had been robbed several times in the past and was tired of the inability of police to protect him. Response time had been horrible.

The response time of the round he had chambered was considerably better.