A new hashtag is trending on social media. #SueTheView. It has to do with TPUSA changing their profile pic to that hashtag. Here’s what happened…

TPUSA held an event over the weekend in Tampa Florida, the Student Action Summit. Here’s how their website describes the event:

Turning Point USA’s 8th annual Student Action Summit will be held July 22nd to 24th, 2022 in Tampa, FL. Thousands of student activists between the ages of 15 and 26 will be invited to attend. Students who attend this summit will hear from guest speakers, receive first-class activism and leadership training, and participate in a series of networking events with political leaders and top-tier activist organizations. Following a TPUSA conference, these activists return to their campuses more energized than ever and with the proper tools and training on how to defend conservatism on their campus.

Note that this event was invite-only and involved minor children.

That didn’t stop the coven at The View from slandering them. (Proving that no lessons have been learned since they crapped the bed in their handling of the Covington Kids and Kyle Rittenhouse stories.)

To the haggard old crones on The View, anyone not playing for their team politically is fair game.

During the event, but apart from it, a group of people with their identities completely concealed were gathered and drawing attention for all the wrong reasons.

It fit the ‘racists’ narrative the left has so been desperate to paint the right with a little too perfectly, and many of us assumed this was another manufactured photo-op like the Tiki Torch smear the Lincoln Project failed to execute properly against Youngkin.

The View took the bait.

While they were forced by their legal department to correct two of these misrepresentations live on air, Whoopi continued to insist that TPUSA somehow welcomed “nazis” into our event “metaphorically.” pic.twitter.com/320UV0aH0G

Their network has been sent a cease-and-desist letter.

Turning Point USA issued a scathing cease and desist letter to ABC News on Tuesday, calling for the Disney-owned company to “retract the defamatory statements” made earlier this week on “The View” or face legal action.
“The false statements of fact intentionally made during The View’s July 25th segment were unquestionably harmful to TPUSA’s reputation and brought the organization and its student affiliates into disrepute with the public, potential donors, and current and future business partners, posing a significant financial loss to the organization,” the letter said.
Fox News Digital has obtained the letter, addressed to ABC News New York bureau chief Joshua Hoyos and ABC assistant chief counsel Ian Rosenberg, which accuses “The View” of making “false, derogatory, and defamatory statements” about its recent Student Action Summit.
…Later on the program, “The View” read an on-air legal disclaimer to inform viewers that Turning Point USA condemned the neo-Nazis protestors who had “nothing to do” with the organization.
“But you let them in, and you knew what they were,” Whoopi Goldberg inaccurately said before the panelists were forced to read another disclaimer and explain the neo-Nazis were “outside protestors” and TPUSA didn’t let them in. “My point was metaphorical,” Goldberg said. — FoxNews

Then again, Whoopi has never been accused of being measured, reasonable, or wise. She is, after all, is the same blind political activist that defended Roman Polanski’s rape of a 13yo girl and said that Jill Biden was an ‘amazing doctor’ and should become the Surgeon General.

Here’s what someone who was actually there had to say about it.

I was standing outside when this incident happened. TPUSA attendees confronted the agitators. Textbook malicious defamation per de by @TheView here https://t.co/7ZK9EOgkzr

And TPUSA updated their profile pic. 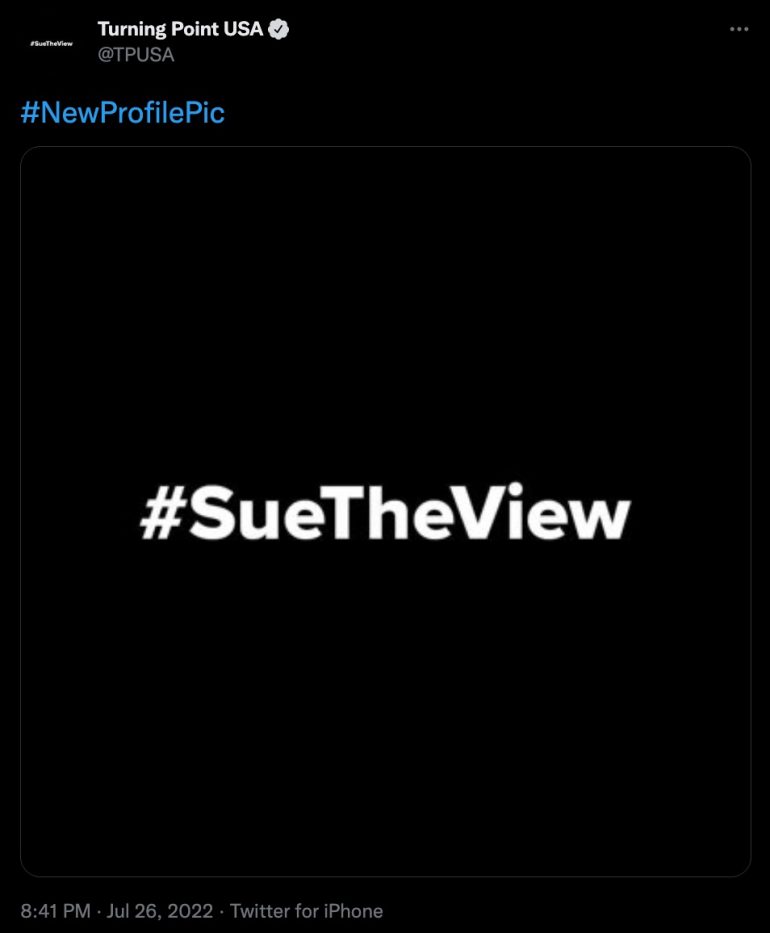 And let’s not be so quick to say it could never work.

Nick Sandmann took his case seriously and absolutely took his slanderers to the cleaners. Maybe it’s time for The View to receive a similar lesson in humility.

Should TPUSA sue the View for defamation?