When alleged ‘whistleblowers’ were being leveraged to push impeachment 1.0, they were the most important people on the planet. But when they show Left-friendly government corruption, those cheerleaders fall silent.

We were forbidden to ask any questions about the name Eric Ciaramella, about whether he was accurately named as the ‘whistleblower’ driving Impeachment 1.0, whether he even qualified under ‘whistleblower’ status, and whether he had any disqualifying political motives that would make us question the sincerity of his accusations.

The unnamed whistleblower was a national hero. He must be protected at all costs because of the great service he had rendered to the country by exposing corruption … or whatever the explanation for his heroism was at the time. We all know how that story ended.

Then we fast forward to 2022 as whistleblowers within the FBI raise concerns about the DOJ being corrupted and turned into a political tool for shielding political friends and destroying political rivals — already a recurring theme in the short time Garland has been Biden’s ‘Wingman’ — and the media suddenly forgets everything it once knew about the great importance of whistleblowers exposing instances of corruption.

Now that Biden is safely in office and Trump defeated, the media have reluctantly admitted that Hunter’s laptop isn’t actually ‘Russian misinformation’. It’s real. Every sordid gigabyte of it.

For the media to denounce Hunter’s laptop as bogus in time to ‘fortify’ the election for Joe (it even came up during the Trump/Biden debate) they would need a plausible reason to deny it. The intelligence community stepped up to provide that.

But there had also been a criminal investigation, remember? What happened there?

Biden would have needed a miracle to save him from the damning contents of that laptop. A certain fictional criminal mastermind would have understood exactly who Biden’s backers could turn to for help: 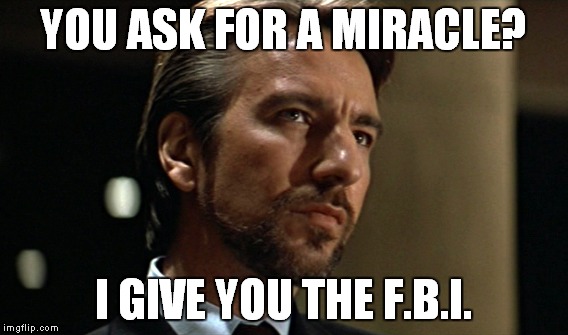 One FBI agent just ‘happened’ to be up to his neck not only in the Hunter Biden laptop investigation but also in the anti-Trump Crossfire Hurricane conspiracy, too.

Gee, what are the odds?

The FBI analyst accused of wrongly labeling evidence about Hunter Biden as disinformation has been linked to special counsel John Durham’s upcoming trial.
FBI supervisory intelligence agent Brian Auten opened in August 2020 the assessment that was later used by the agency, according to whistleblower disclosures received by Sen. Chuck Grassley (R-IA).
Auten also interviewed Igor Danchenko, the alleged main source for British ex-spy Christopher Steele’s discredited dossier. The bureau agent was the unnamed “Supervisory Intel Agent” identified in Inspector General Michael Horowitz’s report on Foreign Intelligence Surveillance Act abuse.
…Auten was also involved in reviewing the flawed Foreign Intelligence Surveillance Act applications and renewals targeting Trump campaign associate Carter Page, which relied on the dossier.
“We believe the Supervisory Intel Analyst … should have noticed and advised others about the conflicting information, given he participated in the January 2017 Primary Sub-source [Danchenko] interview, helped supervise the team’s evaluation of the Steele reporting, and played a supportive role in the preparation of the prior FISA applications,” Horowitz concluded in his report. — WashingtonExaminer

This is just completely unbelievable. Auten, the *same* crooked FBI analyst who:

The FBI already KNEW this guy had been flagged as someone who was likely a malicious political actor and he was STILL given oversight over something as sensitive as the Hunter Biden laptop inquiry.

The FBI analyst who wrongly labeled Hunter Biden evidence as “disinformation” was referred for disciplinary action just months before doing so, whistleblowers claim.
Brian Auten, a supervisory intelligence analyst within the bureau, was referred to the Office of Professional Responsibility following Justice Department Inspector General Michael Horowitz’s December 2019 report on the Trump-Russia investigation and its use of FISA surveillance against Trump campaign associate Carter Page. Shortly after the referral, Auten was involved with the bureau’s inquiry into the son of now-President Joe Biden, with his Aug. 2020 analysis being used in part to justify the decision to “shut down investigative activity.” — WashingtonExaminer

It’s not just Auten, either. Did you notice the Dunleavy tweet earlier in this story mentioned someone named Thibault? He’s neck-deep in this too and his conduct has been called out by name in a letter by Senator Grassley.

Senator Grassley is livid and sent a letter to the FBI is demanding the documents he will need for direct Congressional oversight into this matter. 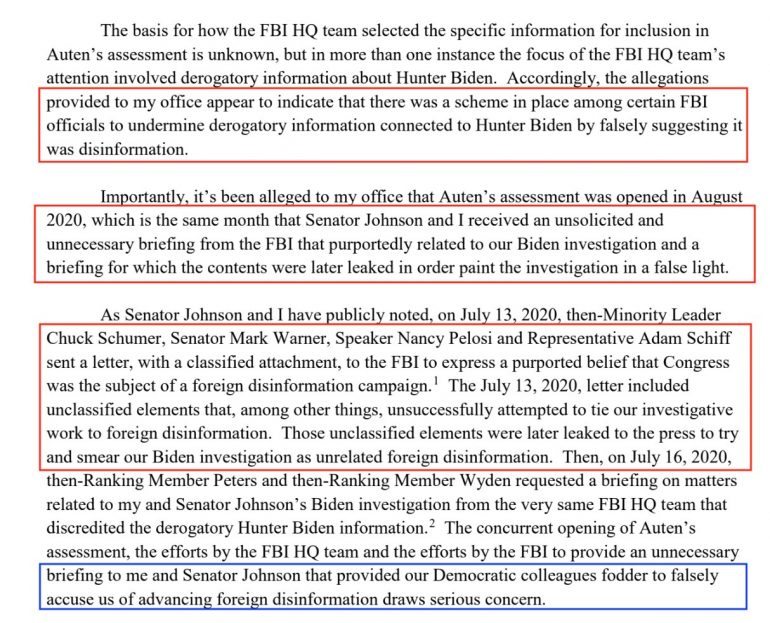 But he goes on to accuse the FBI of trying to kill the investigation in ways that ran explicitly contrary to its own policy and literally hiding the evidence by deliberately misfiling the investigation so it could not be retrieved in the future. 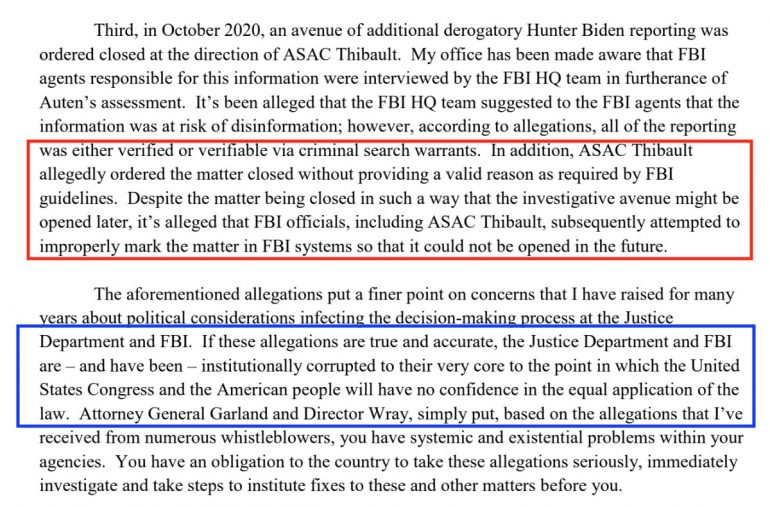 As you can see in the section highlighted in blue from that second screenshot of the letter, Sen Grassley goes on to use some of the strongest terms an elected official could use in describing an institution within the scope of his oversight:

If these allegations are true and accurate, the Justice Department and FBI are — and have been — institutionally corrupted to their very core to the point in which the United States Congress and the American People will have no confidence in the equal application of the law. — Sen Grassley

How high up does the corruption go?

The FBI’s top counterintelligence official would later memorialize discussions about the FBI’s attempts to “get [Flynn] fired.” No reopening was needed, they determined, when they discovered they had failed to close the previous investigation. They found this mistake “amazing” and “serendipitously good” and said “our utter incompetence actually helps us.”

In that same Oval Office meeting where the knives were coing out for the incoming Trump team, Joe Biden made a suggestion that posed a far greater affront to the ‘smooth transition of power’ than anything Biden tries to accuse Trump of violating.

Joe suggested using the DOJ to launch bogus crimiminal accusations against a three-star general of the US military.

Helluva a set of cojones on Biden to play THAT card on an innocent man, especially with all of the skeletons crowded in his own closet.

The LOGAN Act? Ok, Joe. If you’re such a big fan of that particular legislation, let’s take a deep dive into your family’s foreign dealings, shall we?