Clueless Joe and his Merry Band of Ignoramuses has decided to celebrate the passing of the Inflation Reduction Act on the day that it was announced that inflation didn’t decrease as expected.

White House Press Secretary announced just how the Prevaricator in Chief would be lying to the public in one of his brief public addresses.

Karine Jean-Pierre: "President Biden will be joined by thousands of Americans in celebrating the historic 'Inflation Reduction Act'" pic.twitter.com/wHDoWHSS59

This is what the White House will be celebrating…

Higher than economists expected, how will the media spin this in Biden's favor? pic.twitter.com/Au3OkXMRci

The New York Times tried to spin this, but there wasn’t much to work with. Mostly, they were touting the lower gas prices. 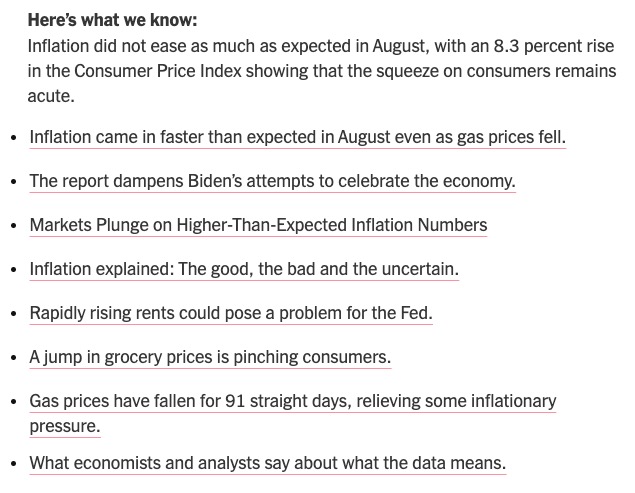 The reason for the lower prices is because the Biden administration chose to gut the Strategic Oil Reserve to keep them from continuing to rise.

Newsmax host, Benny Johnson, posted just how much the Biden admin has drained the strategic reserve.

inflation would be double digits today but Biden is actively draining the Strategic Oil Reserve to artificially reduce the price of oil.
Joe is sacrificing American energy security in desperate attempt to save the regime.

This should be illegal. Criminal. pic.twitter.com/BjogpeNYGV

Rick Santelli was pretty clearly not pleased. He also says the thing that the vast majority of the Regime Media is hesitant to say — this is because of increased government spending.

Major issue beneath headline: food component of CPI #inflation rose by 11.4% y/y in August, up from +10.9% prior and fastest rate since April 1979 pic.twitter.com/qfX8FBatbn

WaPo’s Economic columnist further explains in part why this is hurting American families so much:

Gas prices are down, but here's why Americans are still feeling the sting of inflation:

Brutal numbers ahead of Biden and Democrats' "celebration" today:

📈August CPI soars by 8.3%
📈Grocery prices up 13.5%
📈Core consumer prices rose by 6.3%
📉Real average hourly earnings fell 2.8%
1⃣7⃣ Months in a row under Biden in which inflation has outpaced wages

Staff writer at Timcast posted what should be a reality check for Democrats, but likely won’t be.

The markets took a nosedive.

JUST IN – US stocks tumble on bad inflation data, outlook.

Meanwhile, the President is tweeting that this is a time to celebrate the passage of the Inflation Reduction Act.

Exactly four weeks ago, I signed the Inflation Reduction Act into law.

Tune in at 3 PM ET as I deliver remarks and welcome the leaders and advocates who made it happen to the People's House.

With the Inflation Reduction Act, the American people won and the special interests lost.

Today, we celebrate its passage at the White House. pic.twitter.com/FQDRLkKK1m

And his Spokesmuppet is openly lying to the American people.

KARINE JEAN-PIERRE: "Prices have been essentially flat in our country these last two months." pic.twitter.com/R1t3DfmtqC

Look at what we've accomplished together. pic.twitter.com/WBaKQHg3gl

And they just don’t care.

REPORTER: "Is there any concern about a dissonance between the current economic moment and the kind of celebration you'll have…about the 'Inflation Reduction Act?'"

KJP: "We have to remember, the 'Inflation Reduction Act' is historic." pic.twitter.com/IKd5U5t7r9

Only the Biden administration would celebrate 8.3% inflation as a win.

They started their celebration of the bill that has ramped up inflation with James Taylor singing about a childhood friend’s suicide.

Biden's White House event celebrating the "Inflation Reduction Act" is beginning with a performance by James Taylor of "Fire and Rain" pic.twitter.com/CeVECkldOR

When Biden made it to the lectern, he insisted that the bill that is filled with Democrat spending priorities is reducing inflation. LOL, no.

That's not even close to true. pic.twitter.com/oIqMGyJrgA

As he has been doing with more frequency lately, “Angry Joe” made an appearance.

And he stayed there for the majority of the 25-minute speech.

Biden: "I don't want to hear any more about big spending Democrats. We spend but we pay." pic.twitter.com/MSz7jMl8W1

Biden also said that he’s committed to addressing climate change as the cost of electricity continues to soar.

NOW – Biden: "We’re gonna take the most aggressive action ever, ever, ever to address the climate crisis and energy security." pic.twitter.com/M1oJz5Cx7d

Of course, Biden was still Biden.

Isn’t it weird how the Biden administration is so often “surprised” by things?

Anyone Notice the Trend?

And how the meaning of “inflation” has changed over the past 17 months?

“We interrupt this celebration for a hard, cold dose of reality.”

This is why we call him “Clueless Joe.”

Joe Biden is taking a victory lap on inflation while the stock market tanks…because of inflation. pic.twitter.com/pmTCZlse6d