This guy is warning voters that the Republican on the ticket is a “dangerous threat to the women of Nevada” for her pro-life views. You just can’t make this stuff up.

The new House Majority PAC ad features Dr. Adam Levy, who works at the Birth Control Care Center in Las Vegas and is an Associate Professor at the University of Nevada.

In the ad, Dr. Levy says that Republican candidate April Becker’s policies on abortion pose a “dangerous threat” to women of Nevada. Becker is in a tight race against the Democrat incumbent, Rep. Susie Lee, to represent Nevada’s Third Congressional District.

The Cook Political Report lists the race as one of the 21 “Democrat Toss-up” races.

WATCH: @HouseMajPAC is launching a new TV ad detailing @VoteAprilBecker’s anti-abortion views, and her extreme backers wanting to ban all abortion, even in cases of rape, incest or to save the life of the mother. #NV03 pic.twitter.com/kYEz8s67AS

Before we get into Dr. Levy’s claims in the ad, there are some incidents that cast a wee bit of a shadow on Levy’s integrity.

Not only does he personally benefit from the abortion industry, but his claim that banning abortion would be somehow safer for women is also ludicrous when you look at his history.

Levy’s insurance settled twice for injuries to patients under his care — one of them was fatal.

Levy has already been responsible for at least one death following an abortion he performed, according to the Nevada State Board of Medical Examiners (NSBME). His insurance settled for $20,000 after a woman died in 2007 due to a perforation of her uterus. In another instance, Levy’s insurance settled for $7,500 after a woman “suffered 2nd and 3rd degree burns to her labia and perineum from a hot weighted speculum used in surgery,” according to NSBME records.

And if that’s not enough, he was also charged for sexual acts with minors.

Levy was also charged in 1998 with sexually assaulting a minor under the age of 16 and performing lewd and lascivious acts with a child under the age of 14, according to documents obtained by The Nevada Globe. He submitted an Alford Plea in 1999 to child abuse and neglect, and was ordered to avoid contact with his victims, refrain from possessing pornography and child pornography and complete a sex offender treatment program. He also was sentenced to two years of probation.
Source: Daily Caller

And yet, this is the guy that the Dems brought out there to be a prominent voice for them.

Now that his credibility is trash, we can get to what Levy actually said in the ad.

“Before Roe v. Wade, doctors saw plenty of botched, back-alley abortions, and far too many women died. Never did I think we would be back here as a nation. But politicians like April Becker have led us to this moment. Becker is so anti-abortion, her extreme backers would ban all abortions, even in cases of rape, incest or to save the life of the mother,” claims Levy in the ad.

Either Levy doesn’t know what he’s talking about or he’s flat-out lying.

Dr. Bernard Nathanson, a co-founder of the pro-abortion group NARAL, admitted years later that the claim that between 5,000 to 10,000 women died of “back-alley abortions” before the Roe v. Wade decision was a completely made-up figure to win over supporters.

How many deaths were we talking about when abortion was illegal? In NARAL, we generally emphasized the frame of the individual case, not the mass statistics, but when we spoke of the latter, it was always 5,000 to 10,000 deaths a year. I confess that I knew that the figures were totally false and I suppose that others did too if they stopped to think of it. But in the ‘morality’ of our revolution, it was a useful figure, widely accepted, so why go out of our way to correct it with honest statistics? The overriding concern was to get the laws eliminated, and anything within reason that had to be done was permissible.

This man oversaw over 75,000 abortions when he was director of the Center for Reproductive and Sexual Health (CRASH), the world’s largest abortion clinic. He was so committed to the cause that he aborted his own child.

Dr. Nathanson had doubts about abortion shortly after Roe. Despite having performed tens of thousands of abortions, the advancement in medical technology in 1980 convinced him that the unborn child was a unique human being and he chose to no longer perform abortions and instead dedicate his life to pro-life advocacy.

A doctor who can know what we now know about fetal development and look at the far superior ultrasound technology in 2022 and not come to the same realization that Dr. Nathanson did is either ideologically captured, inhumane, or perhaps both.

And if you don’t believe the claims of a man who became a pro-life advocate, the CDC has been tracking the maternal fatality rate of abortions since just before Roe.

Care to guess how many deaths from illegal abortions occurred in the year before Roe was decided?

Here’s the chart from the CDC so you can see for yourself: 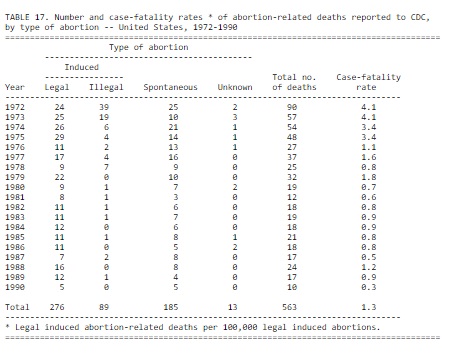 There were just 39 maternal deaths from illegal abortion in 1972 — hardly the bodies piling up in the streets that the pro-aborts claim will happen if abortion is made illegal in all 50 states.

Meanwhile, over 63,000,000 babies have been aborted since Roe and an unknown number of maternal injuries and deaths from the abortion procedures.

And while the pro-aborts insist that outlawing abortion will increase maternal mortality rates, a study published earlier this year in the Ethiopian Medical Journal showed that maternal death increased after the country legalized abortion in 2005.

Leftists often talk about the importance of being on the “right side of history.” It’ll be interesting to see what they do when abortion is viewed as an incomprehensible evil in the same way that slavery is viewed today.

With medical tech continuing to advance, it won’t be all that long now.

Let’s hope that Dr. Levy is still around and we can ask him some questions about his pro-abortion advocacy. That should be interesting.

Meanwhile, we’ll continue to pray that the day that abortion is seen for the evil that it is comes quickly.