Now that the supposed moral high ground they were judging the rest of us from has washed away, smug, bullying COVIDictator lefties suddenly want to play nice and make peace.

Where was this goodwill when pastors were being dragged out of their churches, gym bros had their doors kicked in by the state, or children were being told they had to eat their lunch outside in the cold?

Where was this goodwill when COVID heroes who didn’t want the vaccine were suddenly fired from their jobs — to the gloating of mostly leftist mobs? Jobs the courts are ruling they were wrongly fired from, long after the damage of losing them was done?

Where was this goodwill when patients were denied lifesaving transplants unless they clicked the heels of their boots together, saluted and got ‘the jab’?

What about grandparents who died alone in isolation; families unable to attend funerals; children who lost years of learning?

People were unfairly silenced — often with the cooperation of their own government — for asking the ‘wrong’ questions about COVID, for suggesting the claims of the jab’s ability to prevent contracting or spreading the virus were overblown, or raising concerns about medical consent and side effects of the disease, or suggesting that it might be more than coincidence that the WuFlu first broke out just a few hundred yards away from a facility in which dangerous viruses — including Coronaviruses — were already being studied.

These people were the enemy, and silenced — even when many of the things they asked or said eventually became the majority opinion. Let’s introduce the person at the center of this controversy by screenshotting her Twitter bio. 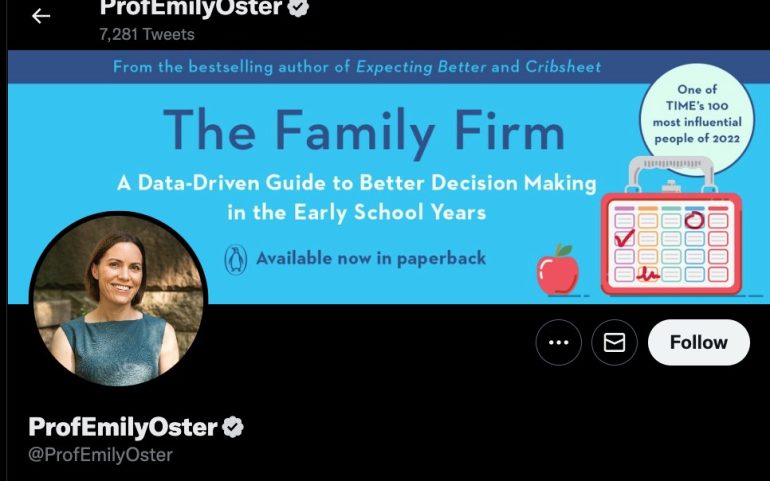 Time’s 100 most influential of 2022? Ok, so this is more than the opinion of some anonymous yahoo logging in after work. She’s one of those important people that gets invited to spout their opinions on television.

Her inability to read the room not only bit her in the ass, but turned her lack of empathy for the real harm that had been incurred into a huge story in the process.

Here’s the original tweet. Notice how many people commented on it. When the comments outnumber the likes, that’s a sign that people don’t like what you have to say. It’s called getting ‘ratioed’. This ratio is about as bad as it gets. 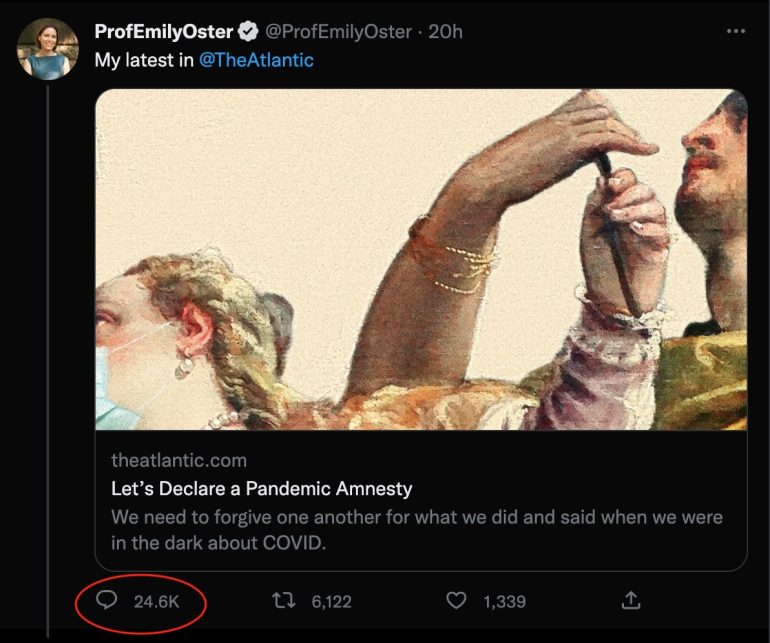 It’s a piece claiming there was a lot we didn’t know, and what was done in ignorance should be forgiven. But parts of the story are straight-up dishonest — like the reference to the medical profession having to take time to tell people NOT to inject bleach. That wasn’t from misinformation, that was from a lying press trying to push a neverTrump gotcha narrative. Find a quote were Trump suggested ingesting or injecting bleach. Take as long as you need. And when you think you found it — listen to the whole clip and learn why you’re wrong.

The following paragraphs, (including the one she closes with) sum up the point she was trying to make.

We have to put these fights aside and declare a pandemic amnesty. We can leave out the willful purveyors of actual misinformation while forgiving the hard calls that people had no choice but to make with imperfect knowledge.
…The standard saying is that those who forget history are doomed to repeat it. But dwelling on the mistakes of history can lead to a repetitive doom loop as well. Let’s acknowledge that we made complicated choices in the face of deep uncertainty, and then try to work together to build back and move forward. –Atlantic

The problem with her premise is that she holds ‘deliberate misinformation’ people in a category of exclusion for amnesty, (a group she seems to equate with right-leaning objectors) while being more than preapared to let obviously malice-driven decisions and people a ‘pass’ as though the decisions they were making were entirely innocent.

The woman got exactly the response she deserved. Here’s a sampling:

Let’s start with the understandable response of Janice Dean, who lost both of her in-laws because of Cuomo’s monstrous policy of sticking infected people in nursing homes among the frail and elderly… a policy echoed by other Governors.

Most others had similar disgust with the original post. 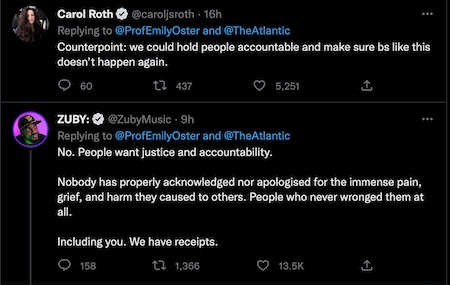 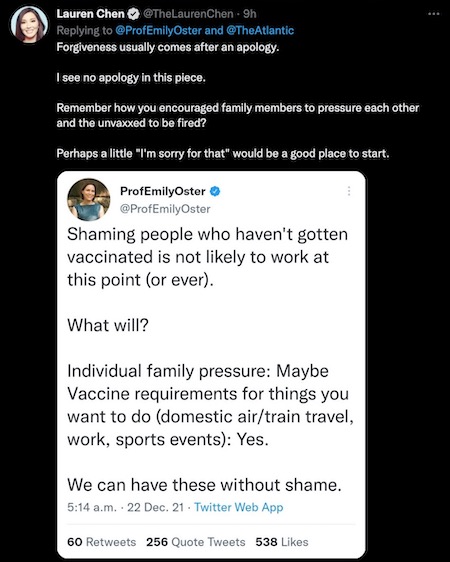 This next one cites a poll. We’ll include both the tweet and part of the poll cited. 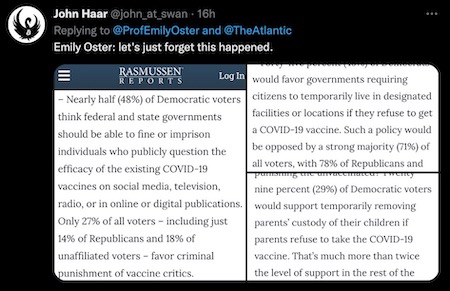 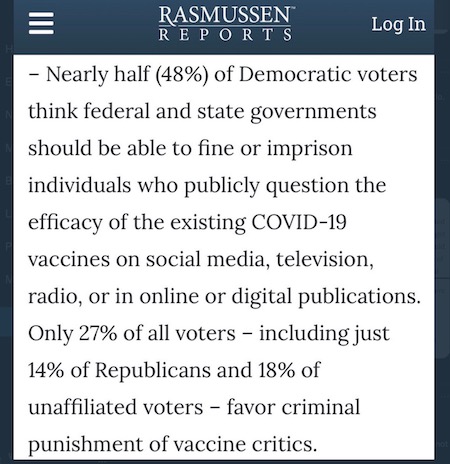 But perhaps the best example of the chasm still separating both groups can be found in the smug response to the man who lost everything due to the precise policies pushed by this same magazine author. There is a near-lethal dose of arrognce in AbigaelAndi’s words combined with precisely ZERO remorse for the pain those now-debunked COVID policies created. 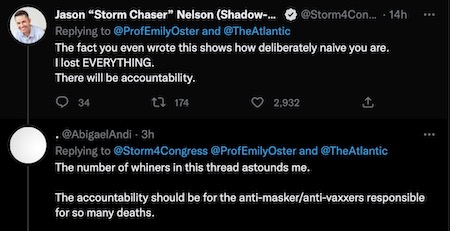 Do you know who else should be getting some apologies ready? More than a few American pastors who helped perpetuate this farce.