While some Democrats have expressed some buyer’s remorse about the last election, others are standing with the President — at least for now. Things could change dramatically after the midterms.

In his Washington Post column on Wednesday, NeverTrumper George Will has made a suggestion to the Democratic National Committee — don’t put Joe Biden or Kamala Harris on the 2024 ticket.

Will says that Biden’s very obvious confusion, his overstepping of his role, and his penchant for prevarication are all disqualifying. He sums it up with the outright lies Biden has told about the massive Student Loan Forgiveness executive order that bypassed Congress “in violation of the Constitution’s appropriations clause” and then telling donors that it was done through a bill that was passed.

During this autumn’s avalanche of political news, an enormous boulder bounced by, barely noticed. It demonstrated why Joe Biden should not seek another term. Democrats should promptly face that fact, and this one: An Everest of evidence shows that Vice President Harris is starkly unqualified to be considered as his successor.
The boulder: Meeting recently with some progressive activists, Biden said his $426 billion student loan forgiveness was accomplished by “a law” that he had “just signed”: “I got it passed by a vote or two.” No. He. Did. Not.

“It is frightening,” writes Will, “that Biden does not know, or remember, what he recently did regarding an immensely important policy. He must be presumed susceptible to future episodes of similar bewilderment.” He concludes,”He should leave the public stage on Jan. 20, 2025.”

Will then took aim at Vice President Kamala Harris for her indecipherable word salads and arrogance of not bothering to prepare before a public address.

…Transcripts of [Harris’s] verbal meanderings cannot convey their eerie strangeness. Videos of them should be watched…
…She sounds, as a critic has said, like someone giving a book report on a book she has not read. Her style betrays a self-satisfied exaggeration of her aptitudes. Lacking natural talent, she needs to prepare, but evidently doesn’t. Complacency and arrogance make a ruinous compound.
Source: Washington Post, November 2, 2022.

Will gave several examples that really must be seen to be believed.

While discussing broadband internet and “the significance of the passage of time” in Louisiana:

In Poland, she was confused about compass points.

Kamala Harris: "I am here, standing here on the northern flank, on the eastern flank, talking about what we have in terms of the eastern flank and our NATO allies, and what is at stake at this very moment" pic.twitter.com/u8zakUJ4ze

At an international conference, Harris made this erudite point on the world stage:

The most scathing part of the piece is this one where — to paraphrase Will — Biden is that container of unpopular leftovers that got lost in the back of the fridge and is slowly growing mold while Harris is the vegetable that was picked too early and didn’t quite ripen properly, but it’s the best you’re going to get.

“Regarding Biden and Harris, the national Democratic Party faces two tests of stewardship: Its imprimatur cannot again be bestowed on either of them. Biden is not just past his prime; even adequacy is in his past. And this is Harris’s prime,” writes Will.

Geez, George… what do you really think of the President and Vice President?

Polling shows that most Americans agree with Will that neither one of them should run in 2024 after the way they’ve screwed up the country. Many Democrats agree with that assessment.

Some Dem candidates in 2022 are distancing themselves from the Biden-Harris administration, including specific stances that they’ve taken on crime, the border crisis, and parental rights.

Other Democrats are waiting in the wings to announce their intentions to run in 2024 once they can pin the coming Red Wave on Clueless Joe and Cacklin’ Kamala.

Heck, Cali Governor Gavin Newsom is already measuring drapes in the White House — he’s raising money for a likely run and cutting ads against Florida’s “Top Gov” Ron DeSantis who is also expected to vie for the White House in 2024.

It’s hard to believe there are still two more year of this administartion left to go.

Biden’s confusion is getting worse and worse. As noted by Will in his piece, the President’s inability to recall that his Student Loan forgivness was an Executive Order and not a bill passed by Congress is pretty scary.

But it’s more than that.

Recently, Biden was talking about the war in Ukraine and mistakenly said Iraq becuase he was “thinking about his son Beau who died in Iraq.” The problem with that is that Beau died because of a brian tumor in the United States — six years after his return from Iraq.

Biden also recently said that he graduated from one of the Historically Black Colleges and Universities (HBCU), Delaware State University — but he went to the University of Delaware which is not an HBCU. How does someone get that sort of detail wrong? And that doesn’t even touch on his handshakes with the invisible man, not knowing which way to get off a stage, his bizarre behavior with women and children, and his need for White House staff-prepared cards to tell him his every move.

These lapses really should prompt calls for the invocation of the 25th Amendment, but then we’d be left with Kamala Harris and nobody wants that.

The Vice President is almost as popular as scabies and doesn’t seem to take her role seriously enough to be bothered to prepare for events or even attempt to address the portfolios she’s been given like… the border.

Perhaps this was the real reason that Biden chose Harris as his running mate — insurance against the 25th Amendment.

Dems voted for Biden in 2020, but — Surprise! — they also have subjected everyone to Cacklin’ Kamala.

What George Will doesn’t seem to get is that if Democrats wanted to do things “for the good of the country”, they wouldn’t be Democrats.

Check out our latest offering in the ClashDaily Store… 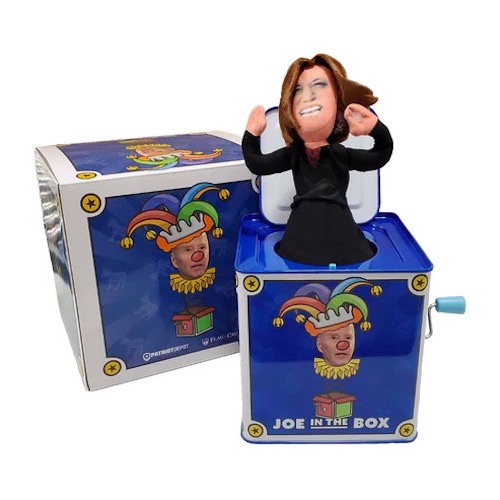