Before Youngkin was elected came the parent protests at school board meetings. Including a father arrested for simply demanding answers about the rape of his daughter.

A grand jury report has made it clear that the second sex attack was preventable and that the school system failed ‘at every juncture’.

Pretty harsh words for a system that was so insufferably self-righteous when parents stood up demanding answers to hard questions.

They were called upon to look into the details of a specific incident.

But for all the strong judgments levied by the grand jury, parents of the children put in harm’s way with a predator may find the result less than satisfying.

The 92-page report by the nine-member panel found that school officials were “looking out for their own interests instead of the best interests of LCPS” in their response to the assaults, which led to a “stunning lack of openness, transparency, and accountability both to the public and the special grand jury.”
“There were several decision points for senior LCPS administrators, up to and including the superintendent, to be transparent and step in and alter the sequence of events leading up to the October 6, 2021, [Broad Run High School] sexual assault,” the report said. “They failed at every juncture.”

Anyone wanting to skim through all 92 pages can find them here.

Here are a couple of relevant points.

The ‘failed at every juncture’ reference… 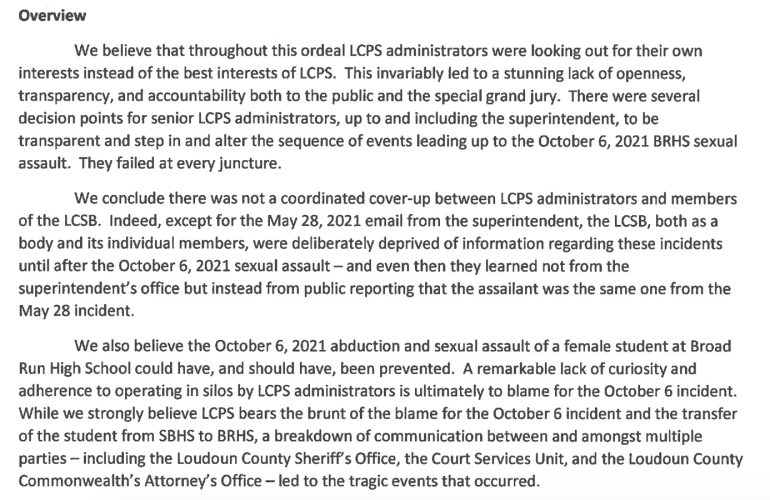 The priorities are shown while the attacker was still at large and he victim’s father on premises and (understandably) confrontational, staff invoked policy 8040 (relating to non-traditional gender) that was the point of origin of the lack of transparency. 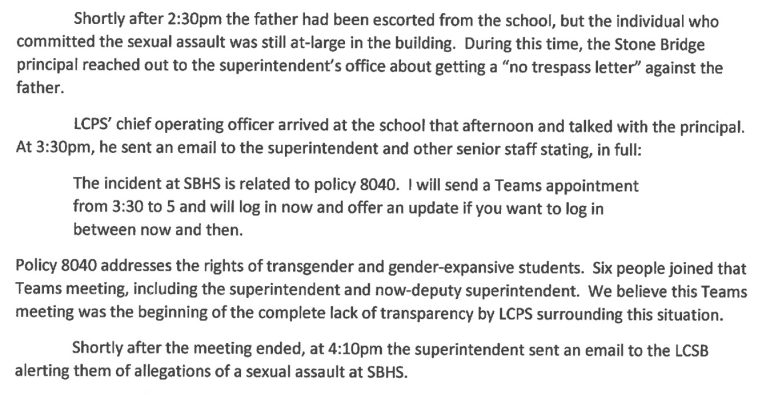 The school sent out an email to the public before 5pm that day, not to alert parents of a sexual assault that had occurred on the property (no such reference was made) but to alert the community about the distraught father who had shown up on school property.

The grand jury called out as a lie the Superintendent’s statement about ‘no records of sexual assault’.

Sadly, this was a missed red flag.

How they considered the victim’s dad to be a more serious threat than the missing rapist:

The report is nearly 100 pages long, including attachmens, and we’re barely 10% of the way into the report at this point. We can’t include everything. Let’s skip ahead to the conclusion:

While highly critical of the school district, the report concluded that there was no coordinated cover-up between the administration and the school board, finding that board members were also “deliberately deprived of information regarding these incidents.”
In a statement, Loudoun County School Board chair Jeff Morse and vice chair Ian Serotkin said they were “pleased that the Special Grand Jury’s extensive investigation found no evidence of criminal conduct on the part of anyone within LCPS, and not a single indictment was filed.”
“This broad use of the special grand jury investigative process did, however, yield a Report that contains several criticisms of LCPS employees and processes within the Division that are quite serious,” the statement said. “We are placing this on our next Board agenda for immediate discussion to reflect on these recommendations and take action as determined by the full Board.” -WashingtonExaminer

The one guy they tried to demonize in this story — the angry father — seems to be just about the only one concerned about doing the right thing by his daughter.

Naturally, he was probably the first angry parent identified by Biden’s FBI as a ‘terrorist’.