It is important to remember, as you read what follows, that self-described Socialist Bernie Sanders is Chairman of the Senate Budget Committee. And some Senate Republicans are happy to let HIS agenda be what governs the first year of a Republican-led House.

With the situation perfectly reversed, McConnell is proving Schumer is FAR more committed to using political hardball to advance issues critical to his party’s agenda than Mitch is.

Perhaps McConnell saves his hardball tactics for making sure that establishment Republicans who salute him win senate races.

Back in 2018, with a budget that would have built the border wall passed by the Republican House and Pelosi just days away from taking the gavel from Paul Ryan, Chuck Schumer forced a government shutdown rather than let Trump fund the border wall.

BREAKING: Trump Gets His $5B To Build The Wall

There was a tool in his toolbelt that Mitch COULD have used even then. But he didn’t use it.

SchumerShutdown: What If 51 Senate Votes Really ARE Enough To Get The Wall Funded?

The national consequences of that decision cannot be overstated:

NEW: Video provided to @FoxNews by TX Congressman @RepTonyGonzales shows extreme overcrowding at the Border Patrol Central Processing Center in El Paso, TX. Congressman Gonzales says he took the video on Friday, when 4,600 migrants were in federal custody. Capacity is only 1,040. pic.twitter.com/dpvH0NNseJ

Fast forward four years — after several million illegal migrants have flooded the country and none other than Chuck Schumer himself has openly appealed for total amnesty — and we find ourselves in an exact mirror-image of the same situation.

The ‘bipartisan’ omnibus bill being touted by Republican senators is exactly the horror show ClashDaily writers anticipated in writing this piece several weeks ago: If Only McConnell Hated The Left’s Agenda As Much As He Hates Some Republicans…

Now that leadership from both parties did whatever wheeling-dealing they do behind closed doors with absolutely ZERO input from the other elected Senators while they hold a gun to Senators’ heads with an artifically-rushed deadline and the threats of (a) staying through Christmas break and/or (b) suffering the political fallout of a government ‘shutdown’, Republicans are poised to give Democrats precisely the win that Schumer refused to give McConnell in 2018/19.

House Republicans see that ‘bipartisan’ tactic for exactly what it is — a stripping away of the few leverage points any Republican opposition has to slow down an unaccountable Biden agenda that doesn’t give a single damn about Constitutional safeguards on their actions. An administration that puts the use of bare-knuckle political power to get its way above all other considerations.

House Minority Leader Kevin McCarthy (R-CA) told members of his conference he is a “hell no” on an omnibus spending deal during a closed-door meeting on Tuesday as Congress looks to avert a government shutdown ahead of its Dec. 16 deadline. –WashingtonExaminer

There isn’t anything House Republicans can do to block this. Not today, anyway. But that doesn’t mean they are entirely without leverage.

13 @HouseGOP to @SenateGOP: “…we are obliged to inform you that if any omnibus passes in the remaining days of this Congress, we will oppose and whip opposition to any legislative priority of those senators who vote for this bill – including the… leader.”#StandUpForAmerica pic.twitter.com/AVAHmESbKF 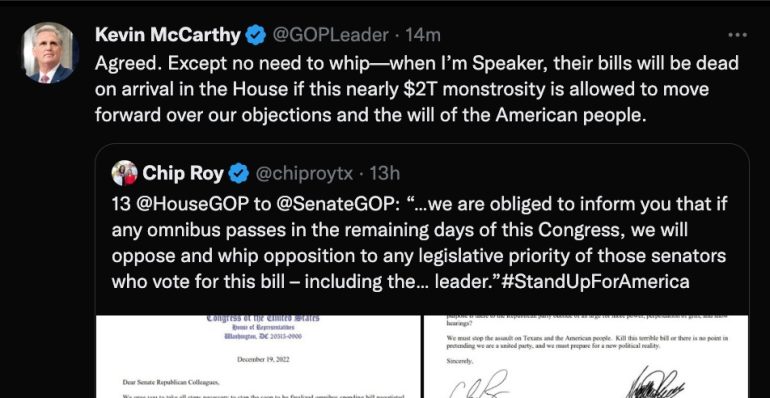 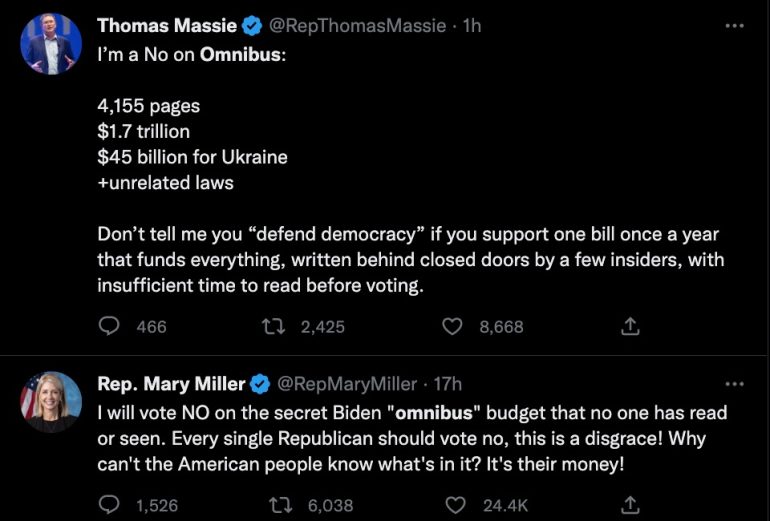 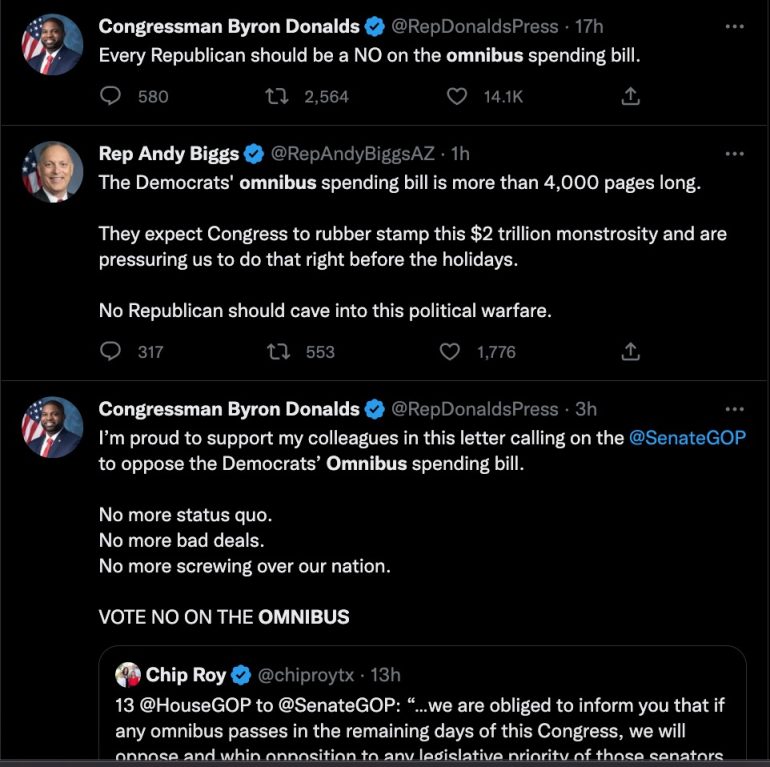 If Bernie Sanders supports this budget. It is definitionally an affront to Republican core convictions.

Let Nancy Pelosi’s budget die on the vine the way Paul Ryan’s did.

With Schumer openly calling for Amnesty, this should be an absolute red line — any budget that doesn’t finish the wall does NOT pass… government shutdowns be damned.