Trump gave everyone a head-fake recently with a ‘big announcement’ for mid-December which everyone assumed would be election-related.

Even his supporters were left scratching their heads over the Trump-themed digital trading cards he issued as part of that announcement. 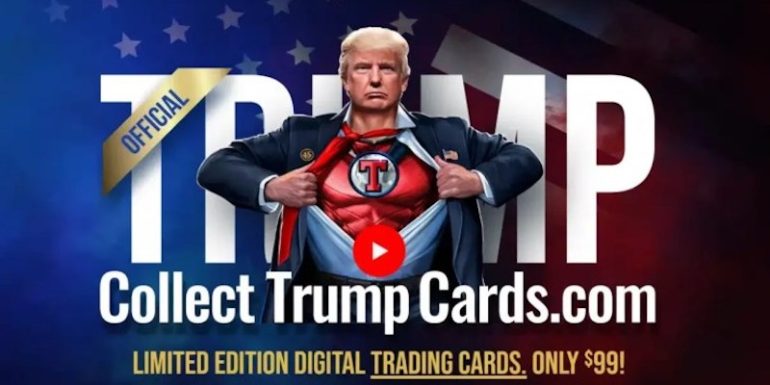 For our part here at ClashDaily, we were annoyed that this announcement stepped on his own very serious political promise concerning free speech and the digital space… and we said so. WATCH: Trump Announces Big FREE SPEECH Platform For His 2024 Run

To the astonishment of many, the NFTs sold out within hours, and have been trading in the markets ever since.

The media, itching for a chance to stick yet another shiv in Trump’s back found an angle they wanted to run about his sales.

Here’s the headline they used at the Express, from the UK: 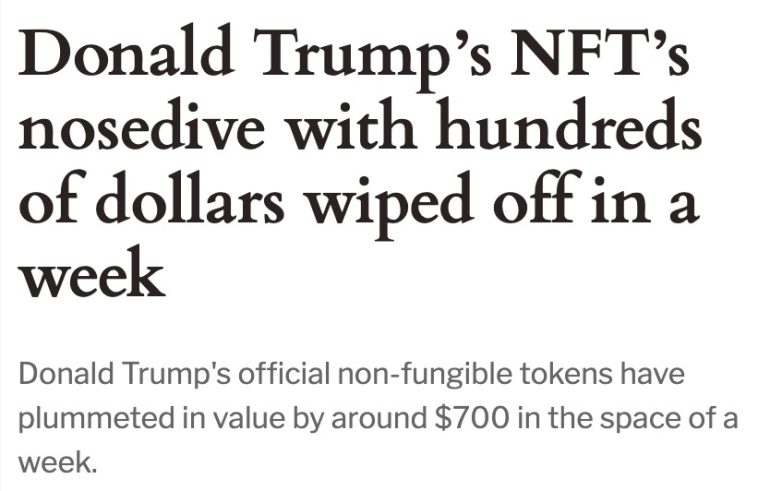 Sounds pretty bad. It must be time to point and laugh at Trump and the rubes who support him right?

Well, before we do any of that, let’s look past the headline into the actual content.

After selling out many of the cards were re-traded and their value soared, peaking at 0.82 Ethereum, or $999, last Saturday on December 17, according to OpenSea.
However, over the past week their value has fallen by around 7 percent, according to the site.
As of 9.56pm on Christmas Eve, OpenSea holds the floor price for the digital cards at 0.24ETH, or $292.62 and £242.78. –Express

Let’s take a step back and unpack these sentences.

When they were first launched, in Mid-December, Trump offered these NFTs for $99 apiece. After that initial offering, they were traded on the open market where the price would be governed by economic laws of supply and demand, just like any stock, real estate, or hard asset.

Within a couple of days, a rush in response to Trump’s intial offer had people on the open market paying 10x what the original price was. The sugar high or the initial announcement wore off and the price stabilixed at roughly 3x the value it had the moment it was released.

Now look back at the headline, where they are painting this as a huge loss.

Did some people get sucked in by FOMO? Did they ‘buy high’ and get taken to the cleaners? Sure. But that happens with every kind of market.

Amazon recently became the first company to lose $1 Trillion of market value. Do you see headlines like this one mocking Bezos as a failure? What about Zuckerberg whose company has lost 70% in 2022 while its CEO was busy tilting at windows for his pipe-dream of the Metaverse?

Nope. We don’t see any of that.

But Trump releases a product that (for anyone who bought and held) has 3x’d its value in a matter of weeks … in a BIDEN economy no less… and Express is looking for some kind of agle to take a shot at it.

Maybe the real issue is that the guy who wrote the article, Dylan Donnelly, is upset that people he has written off as bad, dumb, or worse scored themselves an investment that is making his own portfolio look like a dumpster fire.

That or he’s just using the left’s favorite tried-and-true method of using Trump’s name to pull in hate clicks for their stories.

Either way, it is a reminder of how right Trump was every time he tattooed the press with that pithy phrase ‘you are fake news’.