This time, when people knelt on the football field, it was because they were all praying that God would save someone’s life.

Whether it’s sports, politics, or any other contentious issue, it too often takes somber moments like this to pull us out of our us-and-them battles so we can step back and remember that people on the other side are real flesh-and-blood people too.

In a match between the Bengals and the Bills, a hard hit seems to have triggered a cardiac event in Damar Hamlin.

Later, the Bills said Hamlin suffered cardiac arrest and remained in critical condition early Tuesday. Hamlin fell on his back Monday night just moments after standing up from an open field tackle on Bengals wide receiver Tee Higgins.
Conway said the NFL’s Emergency Action Plan was activated in response to Hamlin’s collapse. The plan included an ambulance, a nearby highest Level 1 trauma center and airway traffic control, she said.
“They never want things like this to happen, but they are prepared for situations like this. And they were able to get him to better care as quickly as they could,” Conway said. “He had a police escort take him in the ambulance. So, he got there pretty quickly.” — CNN

In light of the seriousness of the injury, we’ll set aside the obvious question about another young athlete at peak physical condition having heart issues in the middle of a game. But, full disclosure, that is a conversation some are having, including unconfirmed reports of a recent booster shot he may have received.

The Baltimore Sun shed the following light on what is known about the injury itself:

Hamlin, a safety for the Buffalo Bills, was in critical condition Monday night after suffering cardiac arrest in a collision with Cincinnati Bengals wide receiver Tee Higgins. He got up but then collapsed, and as those in the stadium and a “Monday Night Football” audience watched aghast, medical personnel administered CPR and an automated external defibrillator, or AED, was used on him. He was taken by ambulance to the University of Cincinnati Medical Center.
“Damar Hamlin suffered a cardiac arrest following a hit in our game versus the Bengals. His heartbeat was restored on the field and he was transferred to the UC Medical Center for further testing and treatment,” the Bills said in a statement around 2 a.m. Tuesday. “He is currently sedated and listed in critical condition.”
Jerome, who was not watching the game but looked at replays, said late Monday night that it appeared that Hamlin suffered commotio cordis, Latin for “agitation of the heart,” from being struck in the chest at a particular time in the heart rhythm cycle. That causes an interruption in the heart’s electrical signal, and cardiac arrest.
“It’s a very narrow window,” Jerome said.
The phenomenon has been seen in youth baseball and in lacrosse when balls strike players in the chest, he said. –Baltimore Sun

Even that reporting is not without controversy:

Fan response, on the other hand, was exactly what you would hope it would be in that kind of situation. Immediately, any home-team partisanship fell away to make room for genuine concern for the humanity of the fallen player.

Players and fans alike showed support for Hamlin at the stadium… 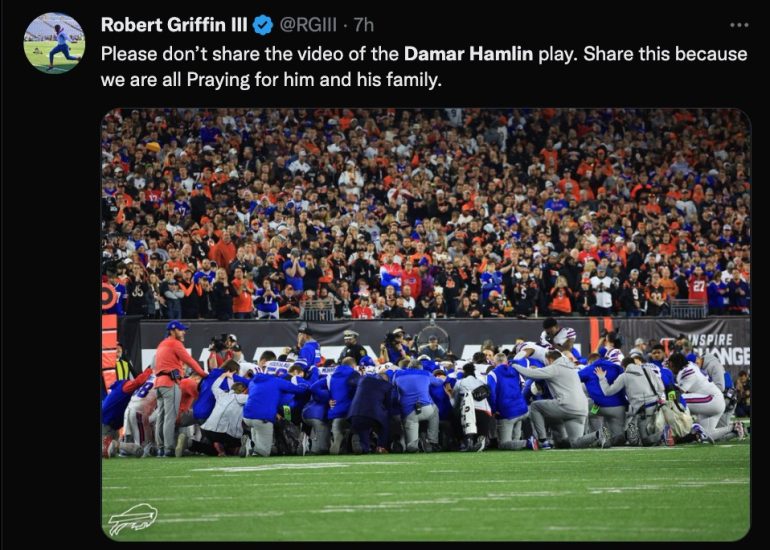 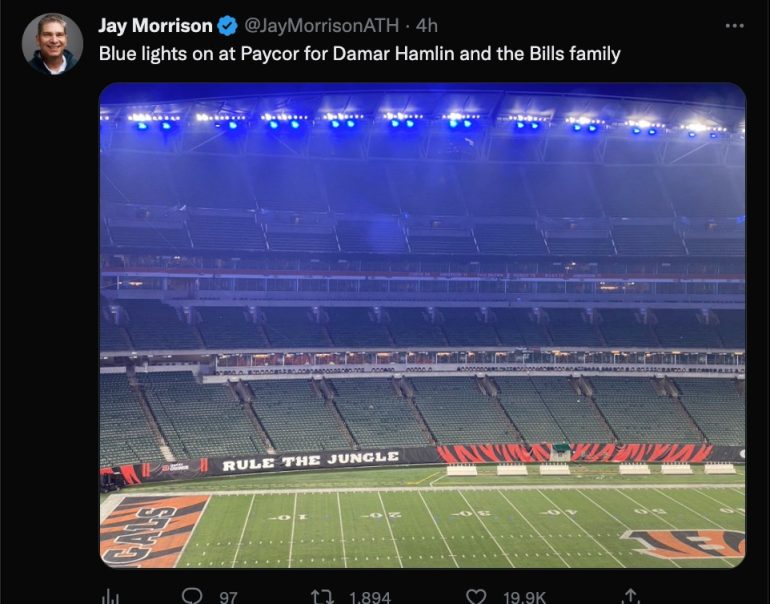 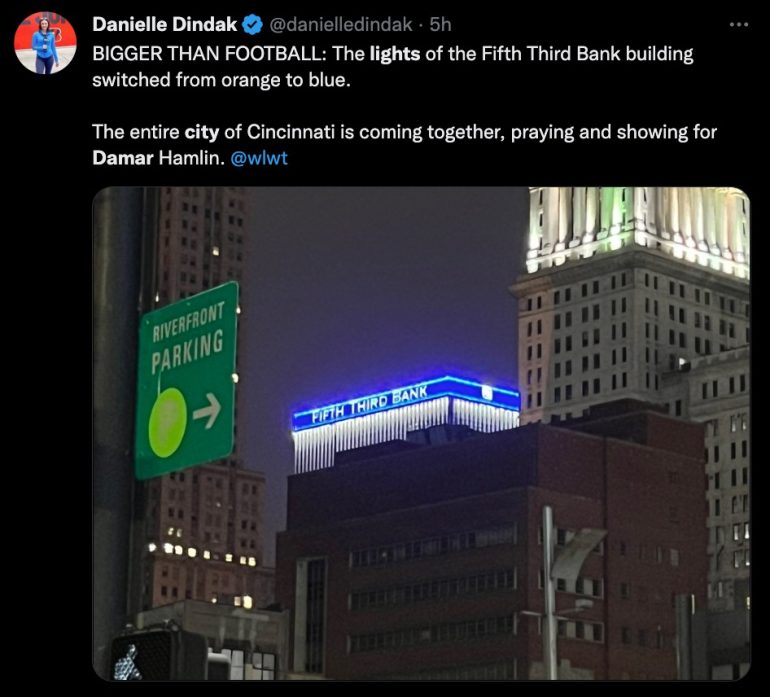 There was even something wonderful came out of this tragedy. A charitable cause that Hamlin has been championing got a HUGE boost in response to his critical injuries.

Hamlin started the Chasin M’s Foundation to raise money to buy toys for children in need.
“As I embark on my journey to the NFL, I will never forget where I come from and I am committed to using my platform to positively impact the community that raised me,” Hamlin wrote in the GoFundMe post.–WLWT

As this is being written, in the pre-dawn hours, the fund has raised more than $3Million.

Just a few hours ago, that number was sitting at $1 Million.

Sometimes it takes the worst situations to bring out the best side of people.