Free speech, in the original context, extends to NOT being forced to speak words against your will or your conscience.

By extension, that means not giving a moral endorsement to anything contrary to that conscience.

While today’s species of jackboot activists struggle with that concept, it has long been included in the classical understanding of liberty.

Of course, so much of our society has been bullied into accepting as normative the dogma of the left’s ever-changing ‘current thing’, that we seldom see anyone stand up against their secular colonialism.

The price for speaking out has been ratcheted so high that many will shut up and agree rather than lose their place in society.

But not this guy.

When everyone else on his team obediently grabbed a jersey that pronounced fealty to rainbow activism, Philadelphia Flyers defenseman Ivan Provorov did not.

His Eastern Orthodox faith has not caved to the pressures of alphabet activists the way many other denominations have.

It was an act of autonomy every bit as simple, and yet every bit as defiant, as the early Christians refusing to utter the phrase ‘Caesar is Lord’. There was no malice in it, just liberty.

It was, in a meaningful sense, a refusal of society’s claim of the ownership of his soul… making it clear his true allegiance lies with a higher authority.

Flyers defenseman Ivan Provorov on refusing to wear a rainbow jersey for warm ups during “Pride Night” due to his Russian Orthodox faith.
pic.twitter.com/wCUl8slmRB

Ivan Provorov didn’t participate in warmups, and head coach John Tortorella confirmed it was because he chose not to wear the team’s Pride-themed jersey on Pride Night.

A more charitable description of the coach’s video can be seen in the caption from this tweet:

Price threw in a meme to (correctly) predict how the activists who had gone all-in on secular colonialism would react to this story. 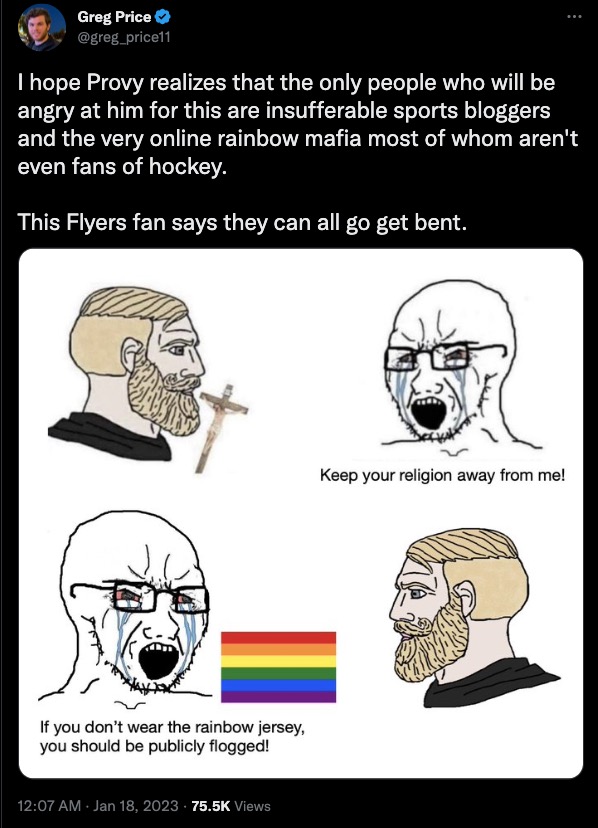 Strange how it never occurs to them to stop denouncing people who refuse to fall in line with the latest ‘current thing’ long enough to wonder whether THEY might be the ones trapped in an echo chamber.