Trudeau’s Canada already had one of the most readily available murder-by-request medical programs in the entire Western world. But now, they’re opening another dark chapter.

Deaths for the disabled.

Even someone who has been supervising these deaths since day one, and has become desensitized to the horror of reducing people’s final days on earth to assembly-line efficiency is raising concerns about the new step Trudeau’s Liberal Party of Canada is taking in pushing the envelope further.

As Canada prepares to expand its euthanasia law to include those with mental illness, some Canadians – including many of the country’s doctors – question whether the country’s assisted death programme has already moved too far, too fast.
Dr Madeline Li can recall the first patient she helped die, about one month after Canada first legalised euthanasia in 2016. “I remember just how surreal it was,” she said. –BBC

Dr. Li went on to describe a woman with ovarian cancer in her mid-60s. There was talk about final preparations. Music. Meal. A final conversation asking ‘are you sure’ — and then, five minutes later, she was gone.

“It was like stepping off a cliff, that first one,” Dr Li said. “Then time passes and it normalises.”
She has since overseen hundreds of medically assisted dying cases. -BBC

You might assume that if anybody would rise to the defense of this practice it would be someone who had committed the last six years of her life to helping hundreds of people in similar circumstances take that final drastic step.

The fact that she is, instead, sounding the alarm should raise some eyebrows.

Since 2016, Canada’s medical assistance in dying programme – known by its acronym ‘Maid’ – has been available for adults with terminal illness. In 2021, the law was changed to include those with serious and chronic physical conditions, even if that condition was non-life threatening.

This year, it is expected to change again to include some Canadians with mental illness.

That planned expansion has ignited controversy over the assisted death programme as a whole and raised concerns that it may be too easy for the vulnerable to die in Canada. Those fears have been stoked by a recent string of reports suggesting that for some, death has been used as a stopgap for a broken social safety net.

“Making death too ready a solution disadvantages the most vulnerable people, and actually lets society off the hook,” Dr Li said. “I don’t think death should be society’s solution for its own failures.” -BBC [emphasis added]

Canada joins a small minority of other Western countries — including Belgium and the Netherlands — in offering death as a medical ‘cure’ to problems other than terminal illness.

And the ‘barrier to entry’ for hiring a doctor to help you take life’s final trip has been reduced to practically zero. 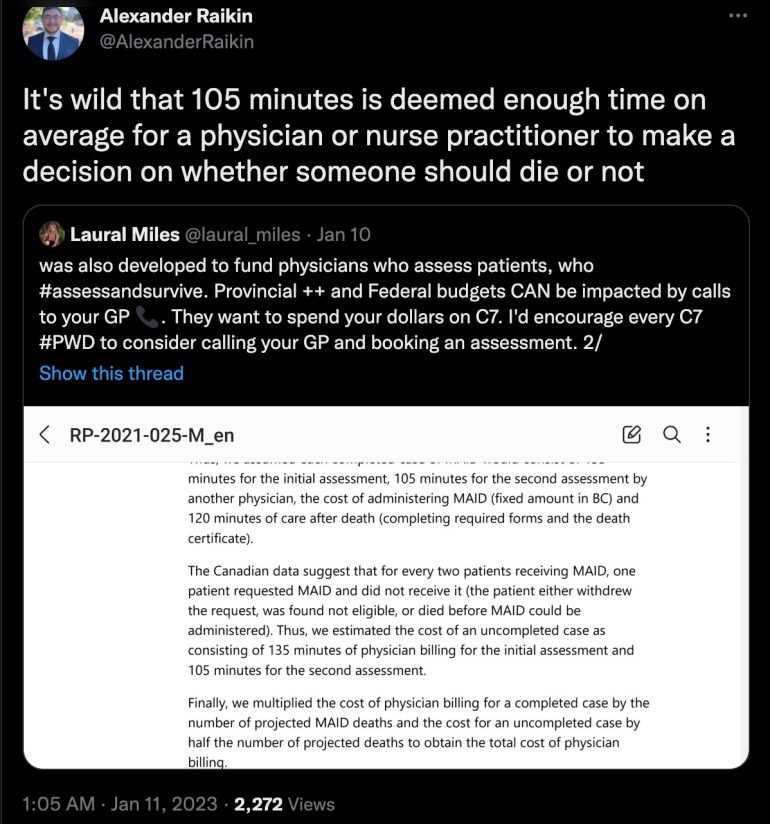 The moral complications go beyond the state’s desire to remove some (in the state’s eyes) dead weight from the expense side of their ledger.

Ending lives has become a booming business in Canada. It’s one of the few medical procedures not suffering from an obscene waiting list. And more are dying every year. 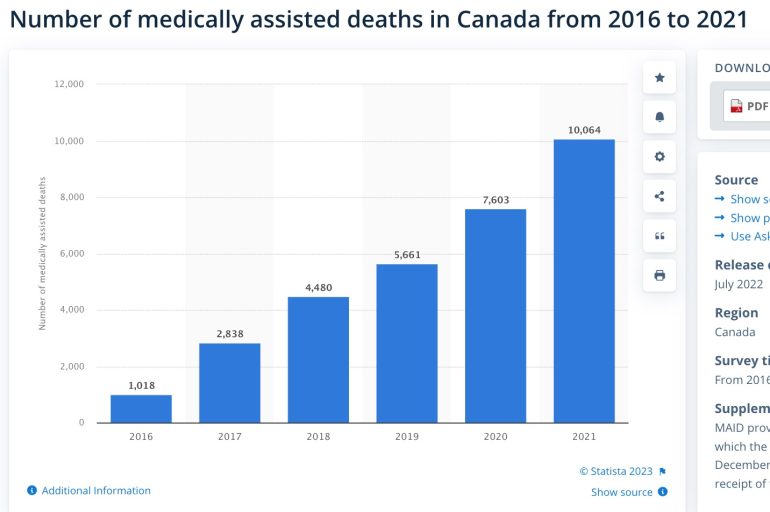 There is also the risk of dehumanizing people who have despaired of living. With pent-up demand for organs, and stories like the one below, it would be easy to start looking at suffering people as commodities on a shopping list.

Doctors in Canada, where medical assistance in dying (MAID) was decriminalized in 2016, performed almost half of the world’s organ transplants after MAID for that period (136), according to the publication.
Data from the Canadian Institute for Health Information confirms this new source of transplant organs accounted accounts for six per cent of all transplants from deceased donors in Canada in 2021. Some transplants, like those for kidneys and livers, can be done with patients who are alive.
“I was rather proud that Canada has done so well in terms of organ donation by MAID patients,” said Arthur Schafer, director of the Centre for Professional and Applied Ethics at the University of Manitoba, in an interview with CTV News. –CTV

After all, medical science has already crossed that line in looking at fetal human remains as ingredients for a science project… or have we already forgotten about the ‘humanized mice’ in Wuhan, or Fauci’s baby scalps?