While ‘cocaine Mitch’ told us Ukraine was the ‘highest priority’ of Republicans, some of us were calling for audits of what we already sent.

If these clowns keep coming to the US taxpayer asking for blank checks and big-ticket military hardware, we’d better be able to make an accounting of what we send over there.

It should surprise exactly none of us that the infamous corruption there has been taking a little off the top of the dizzying amounts of cash and supplies that were sent over there. 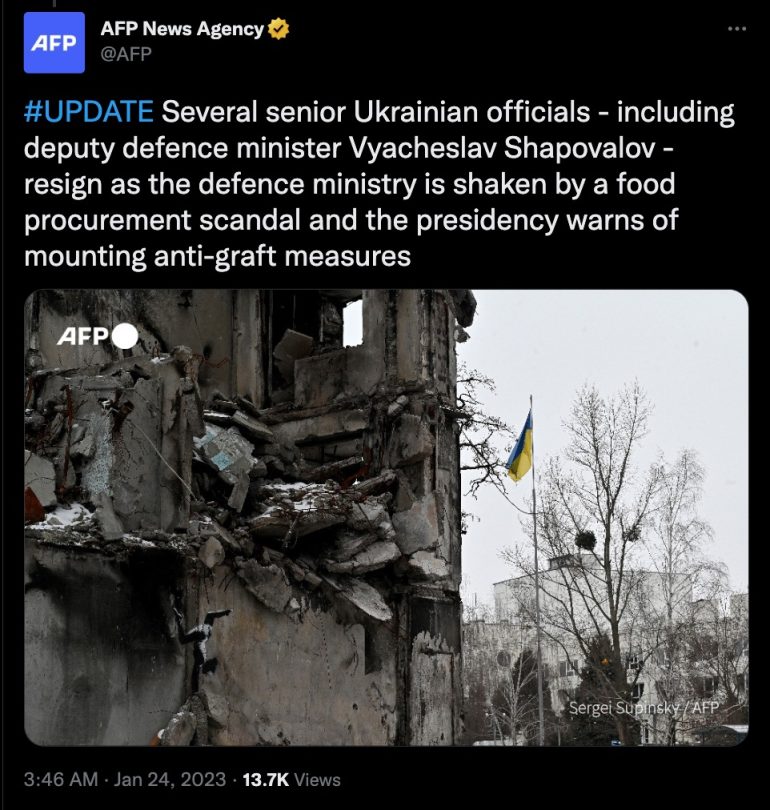 Several Ukrainian leaders have resigned. Corruption allegations play a role in most of those resignations.

Among those stepping down or fired on Tuesday morning were a deputy prosecutor general, a deputy defence minister and the deputy chief of staff in Zelenskiy’s own office.
The changes came two days after a deputy infrastructure minister was arrested and accused of siphoning off $400,000 from contracts to buy generators, one of the first big corruption scandals to become public since the war began 11 months ago.
The Defence Ministry said Deputy Defence Minister Vyacheslav Shapovalov, responsible for supplying troops, had resigned on Tuesday morning as a “worthy deed” to retain trust, after media accusations of corruption which he and the ministry rejected. It followed a newspaper report that the ministry overpaid for food for troops, which the ministry and its supplier both denied. –Reuters

Close to half a million dollars of generators got diverted to pad someone’s wallet. And that’s the part we know about.

Nigeria’s head of state has been complaining that Boko Haram terrorists in his neck of the woods have been recently awash in firepower traced back to somebody in the Ukraine theatre.

This is why some of us have been calling for audits.

Is Congress finally ready to treat taxpayer money with the respect it deserves?