You could get a lot of wrong ideas about God and the Bible by watching movies like Noah. Our popular culture—television, movies and video games—portrays killing so casually that most people are relatively desensitized to it.

Here is God’s verdict from the days of Noah: “And I will require the blood of anyone who takes another person’s life. If a wild animal kills a person, it must die. And anyone who murders a fellow human must die. If anyone takes a human life, that person’s life will also be taken by human hands. For God made human beings in his own image” (Gen. 9:5-6).

If a man was killed, the guilty man or beast must pay with his/its own life. God says, “I will require the life of man.” Killing or bloodshed was not always wrong. But when it was wrong, the penalty was ultimate.

There is sanctity to spilled blood for two reasons:

1) Life is precious, and the life is in the blood. We may consider blood just a “bodily fluid,” but it is precious to God.

Even King David—a man “after God’s own heart—was disqualified from building a temple for God, not because of his adultery with Bathsheba or even his murder of Uriah, but for his many bloody conquests.

“But the LORD said to me, ‘You have killed many men in the battles you have fought. And since you have shed so much blood in my sight, you will not be the one to build a Temple to honor my name” (1 Chron. 22:8). (Emphasis added.)

Now, God had raised David up to defend Israel. Even though the death of Goliath and the Philistines were righteous killings, David was disqualified from this spiritual service. Shedding blood is so significant to God that David was unfit for certain “ministries.”

The bottom line: Shedding blood, taking the life of another, is a big deal. Your life is forfeit if you wrongfully take the life of another. Even if you take life in a permitted manner, it is serious enough that it can disqualify you from certain types of spiritual service.

Bloodshed must have the same significance to us. It is never a light thing, even if you are in the right, even if you do it righteously. 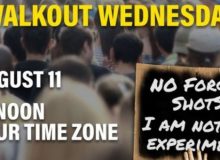 ALERT: Latest Police Suicides Linked to January 6 Raise SUSPICIONS- Four Cops Now DEAD- Something Big Is Going On And They Are Hiding It [VID]
AFF

President Biden Breaks His Oath Of Office
The Lid

Officials Worried That Biden’s Flip On Masks Could Cause Vaccine Progress To Be Flushed ‘Down The Drain’
August 3rd, 2021 The Political Cowboy

When The Devil Sets The Narrative!
August 4th, 2021 Sons of Liberty Media

If FAUCI & BIDEN Blame Viral Spread On The Unvaccinated … Can They Explain This CDC Report?
August 3rd, 2021 Clash Daily