During the Sunday morning news shows, a number of Republicans and advocates for legal immigration called on The President Barack Obama to deport the children — and adults hiding among them — as they amass at the Texas border and that deportation should to take place immediately.

What’s turned into a full-fledged national crisis has led the Obama administration officials to pretend it’s struggling to maintain the overwhelmed detention and processing systems and claim that they may deport some but extend asylum laws for others, according to Rep. Raul Labrador, R-Idaho, who appeared on NBC‘s Meet the Press.

Knowing that David Gregory enjoys verbal confrontations with Republicans, Rep. Labrador, who is Latino, said, “I kept thinking that you need to change your slogan at the beginning of your show,” Labrador stated. “Instead of, ‘If it’s Sunday, it’s Meet the Press,’ it should be ‘If it’s Sunday, it’s another administration official making stuff up on Meet the Press.’ It’s really shameful.”

President Obama and his Democratic Party minions have argued that increased flow of border crossings is the result of deteriorating conditions in Central America. But Congressman Labrador and other GOP critics, blamed Obama’s “Dreamers” executive order for initiating a human tsunami.

“It’s not by accident that these people suddenly show up at practically the same time. There are plane loads of illegal aliens flying into the United States. It’s another example of Obama’s lawlessness,” said political strategist Michael Baker.

“The thing this administration needs to do is immediately deport these families, these children,” Labrador said on Meet the Press:. “I know it sounds harsh, I know it sounds difficult. But they’re creating a crisis.”

Meanwhile on ABC‘s This Week, the commissioner of Customs and Border Protection claimed in an interview that the illegal aliens flooding the Texas border from Mexico are no danger to Americans, despite reports of teenagers wearing “gang tats” (tattoos).

CBP Commissioner Gil Kerlikowske told the interviewer that he is “confident that we have the resources” to deal with the increased border traffic and that the Department of Homeland Security’s Secretary Jeh Johnson deployed an extra 150 agents to the Rio Grande Valley in addition to the 115 agents that were already moving in.

Jim Kouri, CPP, is founder and CEO of Kouri Associates, a homeland security, public safety and political consulting firm. He’s formerly Fifth Vice-President, now a Board Member of the National Association of Chiefs of Police, an editor for ConservativeBase. com, a columnist for Examiner.com, and a contributor to KGAB radio news, a Fox News affiliate. 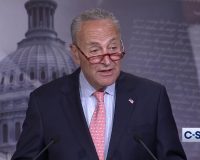